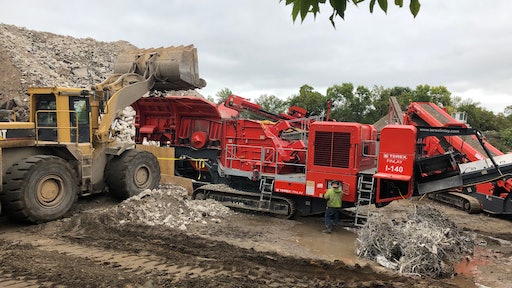 The concrete was crushed on-site for beneficial reuse. The team was also able to recycle ferrous and nonferrous metal, and any debris went to the landfill.
National Demolition Assoc.

In 2019, breakfast cereal giant General Mills said “Cheerio” to its former research and development building in Minneapolis, Minnesota. NDA member Rachel Contracting was asked to bid this private project by a local general contractor it had worked with successfully in the past, which was planning on redeveloping the property into multi-family housing.

“Given our history with the general contractor, there was certainly a relationship to leverage, but our value-added experience from both our estimating/project management personnel and our field expertise played a part,” says Phil Baumer, Rachel Contracting’s director of business development. “Ultimately, our price point was competitive enough that the general contractor decided to retain Rachel Contracting for the demolition.” 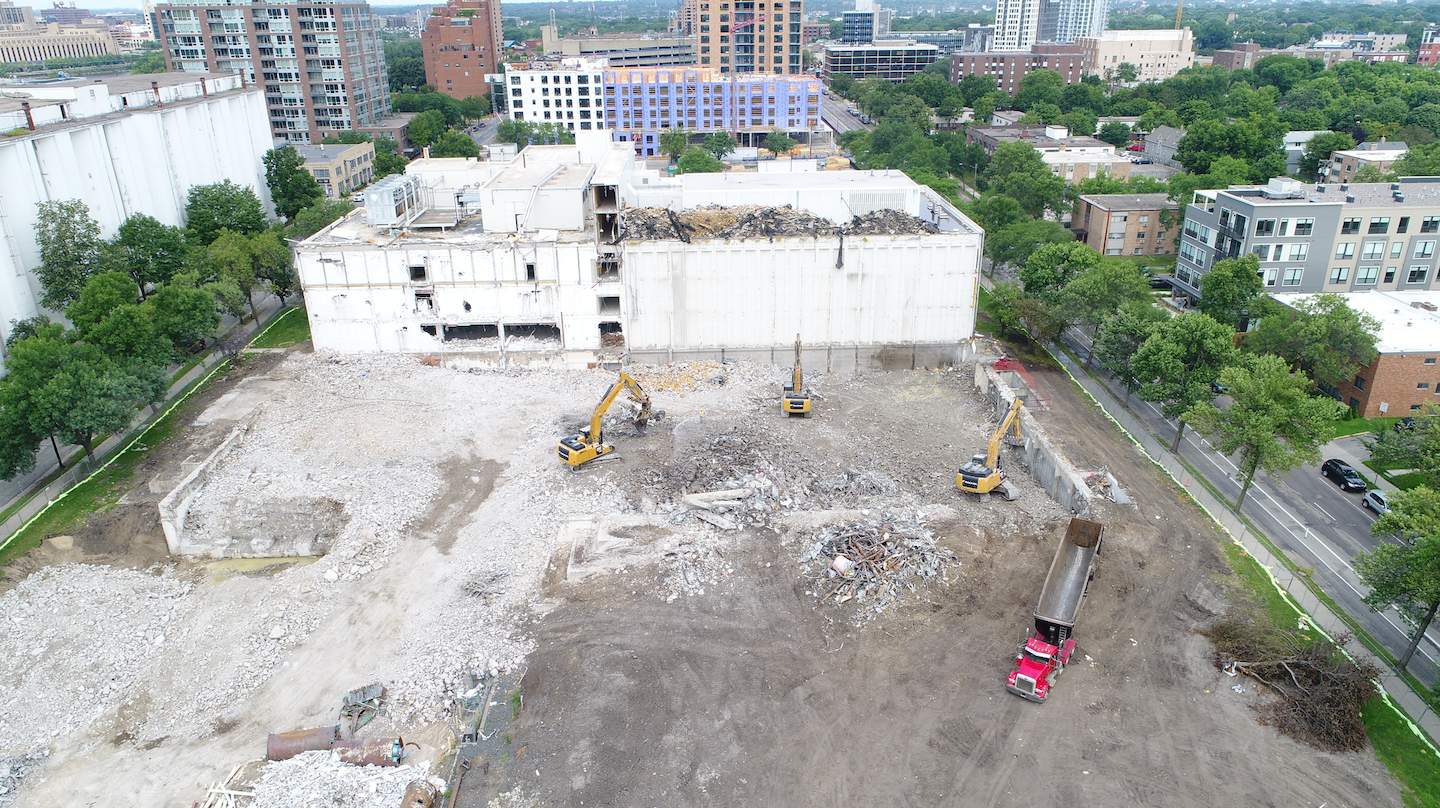 Rachel Contracting cleared a total of 384,000 square feet of floor space.National Demolition Assoc.The Rachel team mobilized on April 1, 2019, and completed the project seven and a half months later on Nov. 15, 2019.

The structure was comprised of six buildings that made up the research and development building. “The original building had been added onto over the years, so there was a likelihood of various hazardous materials present,” Baumer says.

Some of the buildings were as high as six stories, with a total of 384,000 square feet of floor space. Additionally, there were five hydraulic elevators that required abandonment. Rachel Contracting had a plan in place to recycle and reuse as much concrete and scrap as possible.

The interior was stripped to clean out the building, salvaging mechanical equipment, furniture, and fixtures that General Mills left behind.

“The interior GWB walls, AT drop ceilings and carpet were also selectively removed to get clean concrete floors,” Baumer says.

After the building was completely gutted, Rachel Contracting used a high-reach excavator to begin concrete recycling in a top-down process. The concrete was crushed on-site for beneficial reuse. The team was also able to recycle ferrous and nonferrous metal, and any debris went to the landfill.

“Our crews ranged from six to 10 operators and laborers,” Baumer says. “At the peak of the project schedule, there were 10 Rachel team members, and our lowest crew were six and fluctuated in the interim.”

Although it seems like a pretty straightforward job, as with any demolition project, there were some challenges. “The property was surrounded by single-family homes and multi-family units. Dust control was a major component due to the density of residences and people. Working in a major metropolitan area was certainly 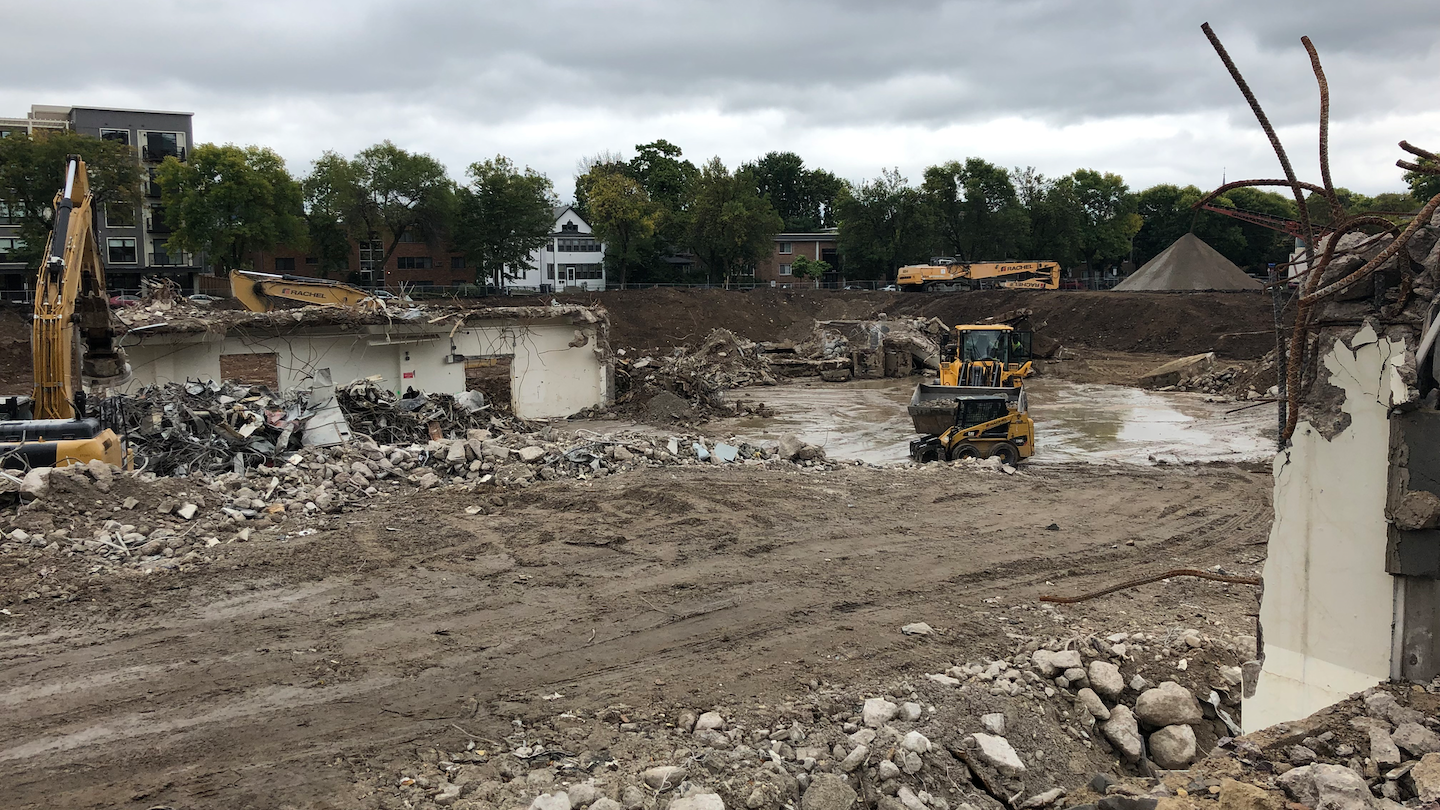 Over 85% of the materials generated on the project were recycled.National Demolition Assoc.a challenge, too, with pedestrian traffic, vehicle traffic, etc. Debris segregation for beneficial reuse was another challenge with various materials being processed. Due to the age of the buildings, there was unidentifiable asbestos found; there was not a full survey done.”

Demolishing a House of Cards

U.S. President Biden and European Commission President Ursula von der Leyen have agreed to a 4-month suspension on tariffs that had been placed on a variety of products, including some types of construction and other heavy equipment.
Sara Jensen
March 5, 2021

Key ways to calculate your equipment cost and how to use that information to be more effective in your project bids.
Bridgit Solutions
March 5, 2021
Construction Technology