Industry is optimistic in general but local construction activity is obviously emerging from a very deep, dark hole 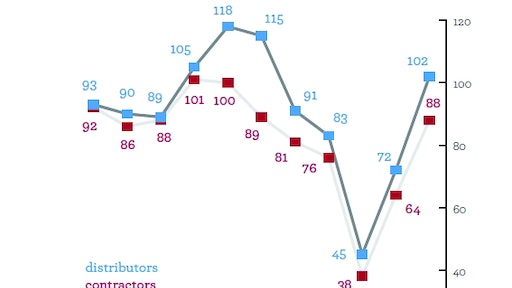 Oak Brook, Ill. -- Well Fargo Equipment Finance, a sponsor at the AED Summit, released findings of its quarterly survey last week at the Summit in Orlando.

The Construction Optimism Quotient (OQ) is this survey's primary metric for assessing expectations of local construction activity for the coming calendar year compared to the previous year. The OQ going into 2011 is a modestly positive 96. It is a marked improvement over the 2010 score of 66 and the all-time low score of 42 recorded for 2009. After wading through the recent recession, construction executives are somewhat more optimistic that local construction activity will improve over 2010 levels, according to survey results.

Each quarter Wells Fargo Equipment Finance, Inc. surveys construction industry executives to gather insight into current business conditions. The Q1-2011 survey was also made possible due to the cooperation and support of Associated Equipment Distributors (AED). These results represent the beginning of the bank's 35th year of surveying construction industry executives.