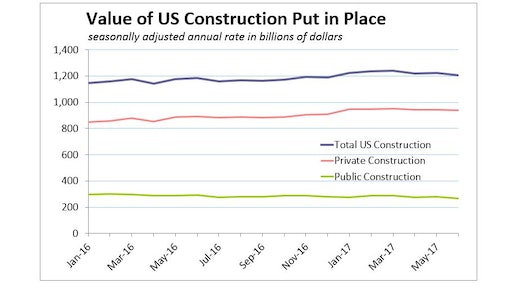 The value of private construction put in place in the U.S. in June declined for the third month on residential weakness. Spending in the private nonresidential sector gained for the second month, and public spending fell 5.4% -- it's largest drop since March 2002.
Data: US Department of Commerce

Public spending tumbled 5.4% in June – the sector’s biggest drop since March 2002 – drawn down by a 6.6% plunge in highway-and-street spending and a 5.5% drop in the educational category. Public construction spending in all categories fell from May to June, and all but one (health care) was lower compared to June of 2016. The decline pushed public construction spending to its lowest level since February 2014.

Monthly values are volatile, so looking at the trend will be more instructive. We find a sharp downward shift in momentum with total private outlays down on a three-month moving average annualized basis in June compared to an increase of more than 5% year-over-year.

Much of the increase in private residential construction spending in the first half of the year is in improvements and single-family construction, while the pace of multifamily sector spending has slowed significantly. The moderating trend in multifamily permits and starts and softer underlying operating fundamentals are consistent with recent weakness in construction spending and suggest little upside risk in the sector.

Private nonresidential sectors are also showing a softer trend. But the commercial sector is still lively. Indeed, commercial construction spending remained in the double digits in the first half of the year relative to a year earlier with only restaurants slipping. Institutional construction, however, is showing broad-based declines during the same period.

Increases in construction labor and material costs are outpacing inflation. According to the producer price index (PPI), nonresidential input prices increased 2.3% in June, and the three-month annualized rate is up a robust 13.2% suggesting more upside risks in input prices.

The shortage of labor is also putting upward pressure on construction costs. Since 2014, construction-sector average hourly earnings by quarter have advanced 2% to 3% relative to a year earlier, and will likely continue to grow given fewer available resources. 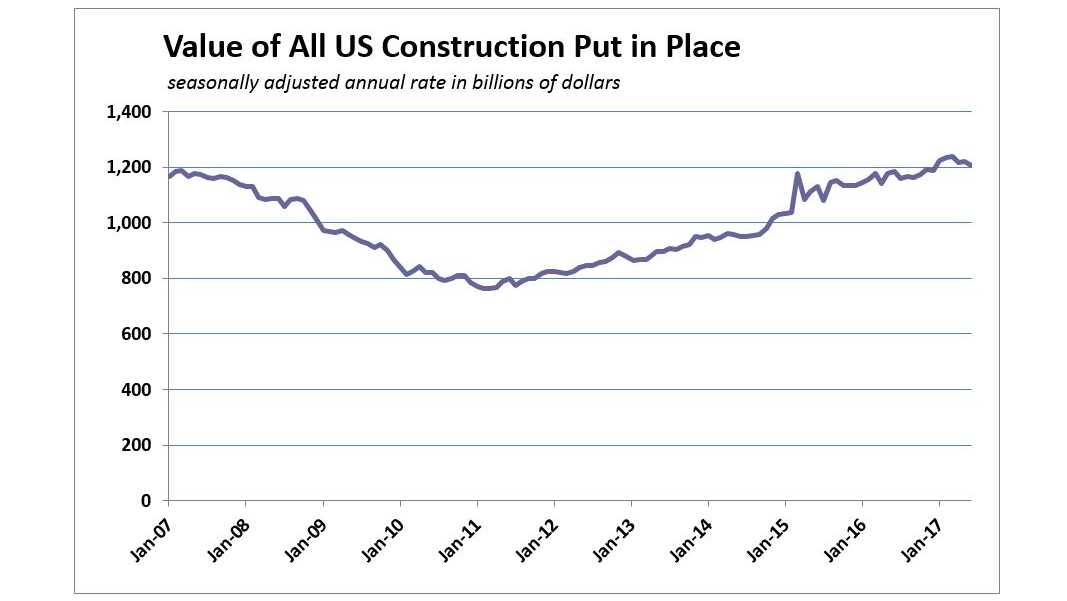 [VIDEO] Which Construction Sectors Dragged Down June US Spending?

Second Quarter US GDP Bounce Back to Trend Despite Housing Shrinkage