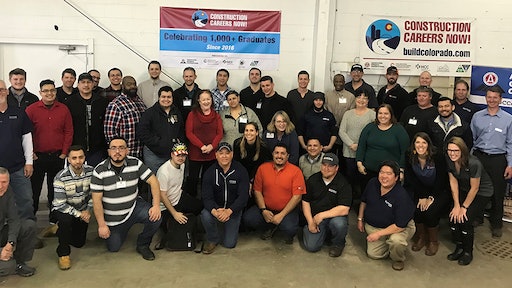 Several factors are driving this increase in construction labor demand, most notably the population growth and volume of development in Colorado. The state of Colorado has increased in population, up 1.4%, representing almost 5.7 million residents, from July 2017 to July 2018, according to the U.S. Census Bureau. The city and county of Denver itself has also experienced a 1.6% population growth from July 2017 to July 2018, equating to 716,492 residents. As Colorado’s most populous cities continue to rank highly in the U.S. News and World Report, with Denver coming in at number two and Colorado Springs at number three on the 125 Best Places to Live in the USA in 2019, the demand for development to accommodate this population shows no sign of slowdown.

“The unprecedented growth in Colorado is forcing construction firms to seek alternative methods of hiring and training their workforce,” commented Michael Gifford, President and CEO of AGC of Colorado. “Programs like Construction Careers Now are helping to meet this construction labor demand by offering firms the opportunity to meet face to face with CCN graduates during the programs’ hiring fairs with participants who are eager to begin careers in construction.”

CCN offers a no-cost, four-week training program for participants to learn construction industry basics, including a 10-hour OSHA training certificate. This program is funded by the State of Colorado, in conjunction with donations from members of AGC of Colorado, Colorado Contractors Association (CCA) and the Hispanic Contractors - Colorado (HCC). Instructors are provided by the Emily Griffith Technical College to provide an introduction to the construction trades with both classroom and hands-on learning opportunities. Each four-week cohort concludes with its own hiring fair that brings local construction firms face to face with the soon-to-be graduates and provides contractors an answer for their construction labor demands.

CCN not only benefits contractors, but also the graduates, who are afforded the chance to answer the demands in their own lives. One such graduate includes Austin Legg-Rife who commented, “I moved to Colorado only a couple of months before joining the program and I can honestly say I don’t know if I would be as far in life and happy with where I’m at without the program. From advice, mentoring, and network options, the CCN team and the program are still having a major impact on my life to this day.” Mr. Legg-Rife needed immediate employment upon moving to Colorado but did not have the resources at first to do so. He is now a Laborer Foreman at Baker Concrete Construction and graduated from the CCN program in October 2017.

For local contractors looking to take advantage of CCN’s workforce development efforts to help supply the industry with new construction personnel, contact Bryan Cook, Chapter Operations Director, at AGC of Colorado at 303-388-2422. Interested participants can sign-up for the CCN program at BuildColorado.com/CCN

Why America Needs to Follow Europe's Lead on Apprenticeship Programs