Too early to know if trend is emerging as Kansas and Nebraska see largest increase.

The following information was released by Associated General Contractors of America:

Construction employment increased in 26 states this November during a period of warm, dry weather according to an analysis of new employment data released today by the Bureau of Labor Statistics. The analysis conducted by the Associated General Contractors of America, however, found construction employment decreased everywhere except North Dakota over the past 12 months.

"It is too early to say if the pickup reflects improving economic conditions or a short-lived break in the weather," said Ken Simonson, chief economist for the association. "Only eight of the states with gains in November had increases the month before," Simonson added.

Only states with back-to-back employment gains are showing even tentative signs of ending their construction slumps, Simonson stressed. Eight states made that list in the September-to-November period, led by Kansas, with a two-month gain of 5 percent. West Virginia and Indiana added 4 percent to their construction rolls over two months and Wisconsin tacked on 3 percent. There were increases of about 2 percent over two months in Arkansas, Georgia and Ohio, and minimal gains both months in Massachusetts.

"The last thing construction workers need right now are cuts in infrastructure investments" said Stephen E. Sandherr, the association's chief executive officer, noting that federal investments in highway and transit projects are currently projected to decline by $15 billion in 2010 compared to this year, a 20 percent decline. "It would be a tragedy is Washington were to step on the first green shoot this industry has seen in months." 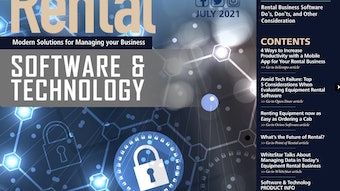 Elevating Safety spoke to a group of experienced MEWP training and safety professionals from across the industry to provide the following summary of what constitutes quality training and evaluate its importance.
International Powered Access Federation (IPAF)
July 14, 2021
Follow Us