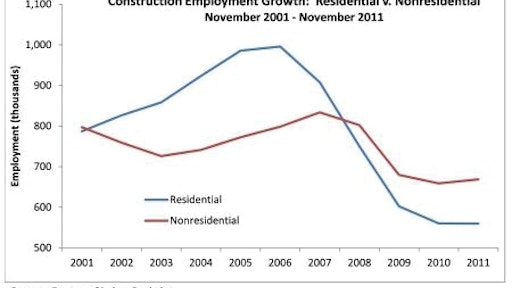 The construction industry lost jobs in November for a second straight month, shedding 12,000 jobs. Over the past twelve months, construction has added 18,000 jobs, or 0.3%, but industry unemployment remains above 13%.

The nation’s construction industry lost jobs for a second straight month, shedding 12,000 jobs in November, according to the Dec. 2 jobs report by the Department of Labor.

The nonresidential specialty trade contractor subsector lost 3,500 jobs for the month and has lost 9,900 jobs, or 0.5 percent, compared to the same time last year. Heavy and civil engineering construction sector employment fell by 7,000 jobs in November and has shed 2,900 jobs, or 0.3 percent, year-over-year.

“Today’s employment release will be heralded by many as a major indication of progress,” said Associated Builders and Contractors Chief Economist Anirban Basu. “Unfortunately, the nation’s nonresidential construction industry is, for the most part, not a participant in this positive dynamic.

“Overall, the last 10 weeks have ushered forth a period of remarkably better news regarding the economic recovery,” Basu said. “During portions of the summer, it appeared that the economy was on the brink of recession. Financial markets were chaotic in August. Since that time, consumer spending and business confidence has been on the rise, translating into more robust employment gains.