Materials Prices Up 2.5% From One Year Ago

Construction materials prices increased by 0.1% from March to April 2012 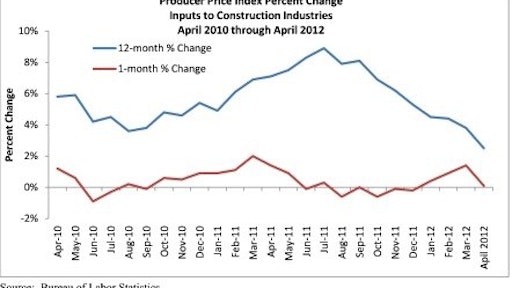 “Recent news pertaining to the U.S. nonresidential construction industry has been somewhat disheartening of late,” said Associated Builders and Contractors Chief Economist Anirban Basu. “Still, at the very least, contractors have been enjoying the benefits of stable materials prices.

“Construction materials prices are now up just 2.5 percent on a year-over-year basis, and hardly moved in April,” Basu said. “However, the trajectory of prices may become more volatile in the months ahead with financial markets being impacted by ongoing bad news from both Europe and the United States regarding near-term economic prospect.

“While that should lead to a decline in materials prices due to softening demand, commodity markets are often impacted when equity and bond investors reduce their exposure to other assets and move into commodities,” said Basu. “This is what happened during the early months of 2008, and it has occurred on occasion since then.

“At this point in time, there are two scenarios,” Basu said. “One would be a moderation of prices with inflation kept in check. The other worse outcome would be one in which the economy continued to disappoint and materials prices rose."

Construction Materials Prices Up 0.1% in April 2012