Construction Confidence Declines in Second Half of 2012

Sales expectations, profit margins and staffing level index values all fell during the second half of 2012 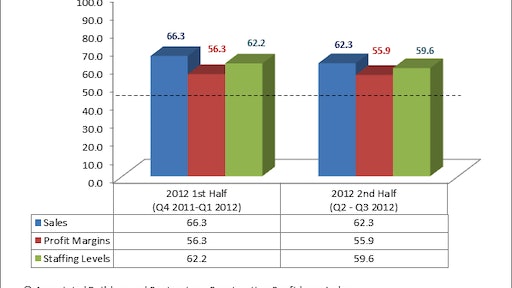 While index values for sales, profit margins and staffing levels remained at favorable levels above 50 during the second half of 2012, all three dropped from the first half of 2012 indicating confidence was lower overall.

“The ongoing lack of confidence, including among those who would otherwise purchase construction services, continues to produce small and halting gains in nonresidential construction spending,” said Basu. “Though index values for sales, profit margins and staffing levels remained above 50 during the second half of 2012 - indicating industry growth - confidence was lower overall.”

Unemployment Increases Even As Construction Adds Jobs in January

Millions of Jobs Are Riding on Infrastructure Funding