Nonresidential construction employment was down by 4,000 jobs in July, largely due to an increase in project postponements and cancellations due to coronavirus impacts. 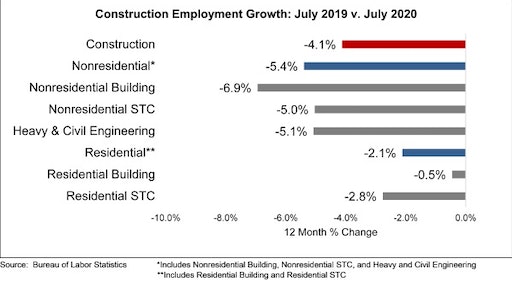 The construction industry added 20,000 jobs on net in July, according to an Associated Builders and Contractors analysis of data released by the U.S. Bureau of Labor Statistics. During the last three months, the industry has added 639,000 jobs, recovering roughly 59% of the jobs lost since the start of the pandemic-induced recession.

Nonresidential construction employment, however, was down by 4,000 jobs on net in July compared to June. The bulk of job loss emerged from the nonresidential building subsector, which experienced a decrease of 9,300 jobs. Nonresidential specialty trade contractors added 3,500 jobs, while the heavy and civil engineering segment added 1,800 jobs.

The construction unemployment rate was 8.9% in July, up 5.1 percentage points from the same time last year. Unemployment across all industries declined from 11.1% in June to 10.2% this month. 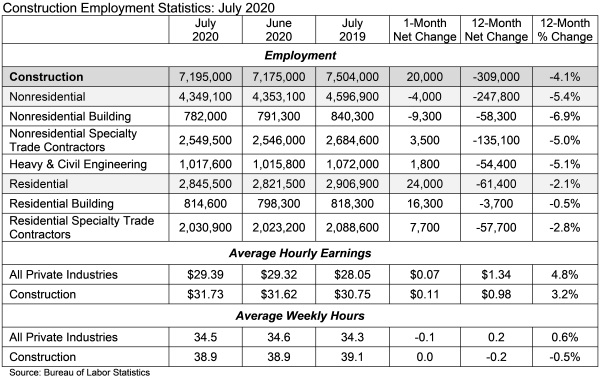 Associated Builders and Contractors“For several weeks, contractors have noted an increase in project postponements and cancellations due to coronavirus impacts,” said ABC Chief Economist Anirban Basu. “July data reflect this reality, as many of the postponed or cancelled projects are in categories such as office, lodging and retail. Correspondingly, employment in the nonresidential building segments declined by more than 9,000 positions in July.”

“At the same time, there appears to be a growing amount of work modifying existing structures,” said Basu. “That helps explain the 3,500 jobs created within the nonresidential specialty trade segment, which, among other things, encompasses workers who handle air handling systems.

“The outlook for nonresidential construction spending is not especially favorable for the next year,” said Basu. “The pandemic remains stubbornly in place, and while today’s jobs numbers indicate ongoing economic recovery, the pace of recovery has softened in conjunction with viral resurgence. Commercial real estate fundamentals are in tatters, with the pandemic set to leave behind many shuttered restaurants, empty storefronts and vacated office suites. State and local government finances are also in dire shape, while the federal government’s Highway Trust Fund is on the verge of insolvency absent any congressional intervention. While contractors maintain a healthy level of backlog, according to ABC’s Construction Backlog Indicator, the trajectory of nonresidential construction during the months ahead will depend heavily upon the nature of economic stimulus and the extent policymakers prioritize construction and infrastructure.”