Cleveland Cement Contractors covers the concrete work on the restoration of the 216-year-old Virginia Capitol. 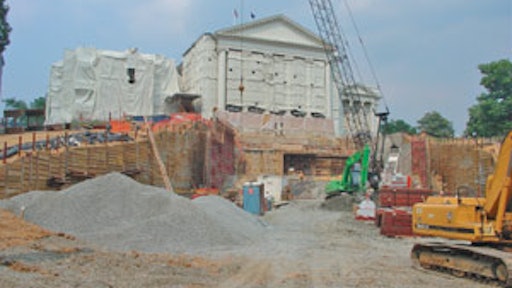 There are only a handful of buildings in the United States that rival the Virginia State Capitol for historical prominence.

Thomas Jefferson designed the original structure, modeled after an ancient Roman temple. With construction beginning in 1785, the building has housed Virginia’s legislature since 1788, except for a four-year stint during the Civil War when the Virginia State Capitol served as the seat of government for the Confederate States of America. It is currently the nation’s second-oldest working capitol.

After more than two centuries’ worth of wear and tear, the state of Virginia recognized the need to renovate, update and preserve this historic building. In 2004, the Virginia State Capitol Restoration and Extension Project began as an effort to turn around years of water damage, termite infestation and general aging. The project also includes updates on water and sewer utilities, electrical systems, telecommunication wiring, heating and cooling and making the building fully handicap accessible. A new underground extension off the south portico will house a visitor’s center and a security entrance to the building.

Cleveland Cement Contractors of Cleveland and Richmond, Va., working for the Gilbane/Christman joint venture, is carrying out the needed concrete work for the project, inside and outside. It includes pouring new floor slabs inside the building, restructuring concrete on the existing roof and walls, installing elevator shafts, building a new mechanical tunnel, repairing the concrete work in an existing mechanical tunnel and building the underground extension. Cleveland Cement began work on the project in early 2005 and will be finished by the end of the year.

Clay Haselden, senior project manager with Cleveland Cement, explains that the building had to remain fully functional and was occupied by the Virginia General Assembly and other Capitol tenants while much of the outside construction was taking place.

“The skin was being removed from one end of the building and we were digging a tunnel on the other end while people were still working inside,” Haselden says. “When the governor had a meeting we had to quit digging holes or stop running heavy equipment outside his window.”

The majority of Cleveland Cement’s exterior work was on the visitor center and security entrance extension. The Capitol’s south portico was shored and underpinned with jet-grouted columns and a 60-ft. deep slurry wall. Then the site was shored and excavated from 30 ft. at the existing building and tapered down toward the street. The hillside extension eventually will be covered by dirt and the new entrance will open up at street level.

“Because it’s underground, there is an extensive waterproofing system,” Murphy says. “This site was pretty dry because it was just an open cut to an existing street, so the water all drained down toward the street. We encountered very little water problems. But the problems we did run into were with existing utilities — some are 150 years old, like brick sewer lines that you excavate underneath and they collapse. (Replacement of these lines is part of the restoration.) With a lot of these utilities, no one ever knew where anything was. The records that predated the Civil War that would have recorded where utilities were, if there ever were any, are lost.”

Several months ago, the building was cleared and Cleveland Cement began working on several indoor projects.

“Once we got everyone out of the building, they tore the whole first floor out, down almost 4 ft. and well below where it originally was,” Haselden explains. “We poured concrete slabs, and they installed computer floors for access for the modern equipment.”

Cleveland poured cement floors throughout the building and restructured any wall work that needed to be done. They also poured the work for new elevator shafts and worked on repairs and access holes on the roof. Haselden says the roof work shows the uniqueness of the construction methods used on the building.

“The structure itself has no foundation. It’s brick sitting on dirt, but the brick walls are 4, 5, sometimes 6 ft. thick. They go up through the whole structure and support all the floors and roof, all without a concrete foundation,” Haselden says. “The amazing thing is all the structure is brick, yet the roof is cast-in-place concrete.”

The two wings built in 1906 on either side of the Jeffersonian building also have a unique roof structure that Cleveland Cement had to deal with.

“The roofs of the two wings had a terra cotta tile that was grouted in for the roof, something I had never seen before,” Haselden says. “It was a structural steel frame with tile grouted in between. We had to take some of that out for new access hatches and mechanical equipment, and we patched up around those holes with concrete.”

Working on a historical building such as the Virginia State Capitol is a little different than working on modern buildings. Construction practices used more than 200 years ago are quite different from today, but Haselden says the engineers working on the project decided how to integrate the old techniques with the new construction methods.

“The basics are still pretty much the same — but today we have better technology,” Murphy says. “The development of different additives like super plasticizers and using fly ashes and other types of pozzolans has changed the mechanics of the concrete a little bit, but you still have to put up forms, pour concrete in them and strip them off after the concrete gets hard.”

Haselden says that on projects like this, workers have to slow down the pace they usually keep on construction projects.

“You have to hold the building in high regard and not go so far as to cause damages,” he says. “We’re proud to be part of a historical project like this. There aren’t many people who get to work on a building with that kind of historical significance.”

“It’s really kind of neat,” Murphy offers. “You can go in and uncover a wall and find a wood door jamb that was cut out by hand and installed pre-Civil War — you’re working with history.”

A concrete masterpiece in peril