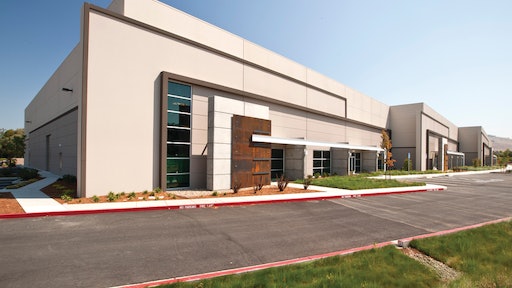 Elements of the Metropolitan Van & Storage building create a visual dialogue of parts which effectively dispels the mass of the overall building, ensuring that the building achieves a facade that is geometrically modern, sculptural in composition and sympathetic to the human scale.

This Napa, Calif., high bay warehouse provides temporary storage of personal effects for military personnel during deployment, and it was designed to maximize the floor plate efficiency on a difficult site. The building footprint is a series of three stepped volumes organized to address the curved frontage of the project site, while achieving maximum interior flexibility.

One simple decision that enhanced the interior flexibility of the space was to eliminate all recessed entry storefronts, instead opting to place the windows in the plane of the tilted concrete wall panels. With the exception only of the interior steel columns, the entire interior of the building is usable space. The absence of a recessed entry meant that the designers needed to find other means of providing relief and shadow along the exterior facade.

For this purpose, a variety of rectilinear forms and layers was added to the building exterior to create a composition rich in visual interest. These design elements use freestanding tilt-up concrete panels in non-traditional ways and explore the use of different finishes and decorative attachments. Most notable are the large wing wall panel extensions at the building steps, finished to resemble cast-in-place concrete. These panels are enhanced with 2-foot edge returns and COR-TEN weathering steel accents.

Smaller wing wall panels, also finished to resemble cast-in-place concrete, stand perpendicular to the building face. Other elements include white steel canopies and architectural I-beams, as well as foam banding elements that create large geometric forms on the main building face. The building panels are further enhanced with accent lighting fixtures at each small wing wall and a grid reveal pattern. Together, these elements create a visual dialogue of parts which effectively dispels the mass of the overall building, ensuring that the Metropolitan Van & Storage building achieves a facade that is geometrically modern, sculptural in composition and sympathetic to the human scale.