The Galaxy FBO building in Texas costs the developer nearly $500,000 less after it was redesigned from the planned steel structure to tilt-up concrete 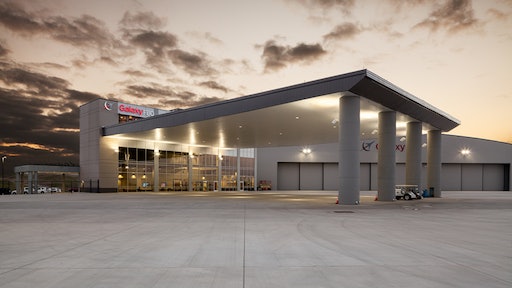 In early 2012, the Galaxy FBO was originally conceived to be a structural steel, heavy gauge stud, and metal panel structure and skin. Due to cost, the E.E. Reed team worked with the design team, JGJ Architects, to redesign the entire scheme to a three-story, tilt-up structure and skin. The redesign took several months to accomplish but saved the developer nearly $500,000. The tilt-up scheme was embraced both from a functionality and durability standpoint as well as a more cost-effective solution.

The tilt-up scheme utilized extensive reveals and formliner to achieve the original look while improving overall quality. The FBO is attached to hangar one and the design team utilized 60-ft.-tall tilt panels to create two-hour rated separation between the hangar and the FBO. Executive offices are located overlooking the interior of the hangar to allow customers to get an inside look at the aircraft hangar. The tilt-up structure forms the frame for an extensive curtain wall overlooking the jet canopy.

Since the goal of the developer was to have a restaurant on the third level, the floor-to-floor heights went from a customary 13 feet 6 inches to 21 feet, creating a nearly 70-foot-tall tilt-up panels. The height and weight of the panels themselves were such that very few cranes in the Houston area could pick and set the panels. Upon completion of the project, the developer was so pleased with the look, function, and result that they have elected to build future FBOs as tilt-up structures. The structure has garnered significant praise from the City of Conroe and the surrounding community.