Decorative Concrete: My Summer Vacation on the Chattahoochee River

The collaboration of the Whole Foods Store project in Duluth, GA. 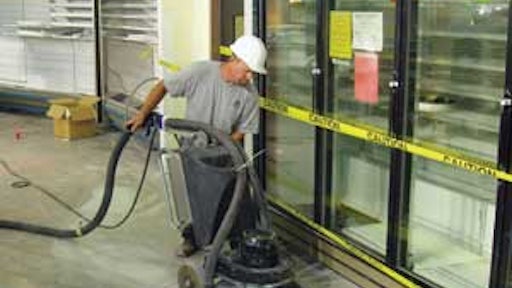 Recently we were involved on an interesting project in Duluth, Ga., that was far from a relaxing summer vacation. Mike and Kim Speach of Tropical Toppings, Mike Miller and Kelly Burnam of the Concretist, and Lee Ann and I of Decorative Concrete Institute joined forces on a very creative collaborative effort at a Whole Foods store.

As much as I wish we could have been floating down the Chattahoochee in an inner tube with a cold brewsky instead, we spent a good percentage of the time on our hands and knees grinding concrete along this 900-lineal-ft.-project. Our scope of work was to recreate the Chattahoochee River throughout the outer perimeter of the entire interior floor complete with interesting graphics and certain points of interest along the river, complete with five lakes.

What made this project unique was the fact the entire floor had previously been polished to a 3,000-grit finish, and during the polishing process an epoxy had to be used to fill all the voids in the concrete. What this meant, is that we had an extremely dense surface as a starting point for us to perform our artwork. Prior to mobilizing onto this project in order to best represent the river, our team had to conduct interviews with the upper Chattahoochee River keeper as well as various authors and historians to gather enough information to accurately include this historical information on the floor. One of the major challenges was to come up with a formula of constructing this job with aesthetics in mind, but durability as well.

The project was built with the intention that as time passes and maintenance crews clean and buff the floor the river actually takes on a natural patina. After countless phone conversations and meetings of the minds, we were in agreement that scarifying attachments on the bottom of grinding machines combined with a whole lot of hand grinding was the most efficient way of obtaining an aggressive profile for our epoxy to stick to. The project started off with an area of the floor in which countless samples were produced to obtain all of the necessary coloring and application techniques. After two plus days of sampling, we were off on our journey down the Chattahoochee.

Once all of the necessary layout was transferred to the floor, we would come behind with our scarifiers, which cut a path at the narrowest point of roughly 20 in. Anything narrower had to be ground by hand. Also, where the scarifier was used it did not provide enough of a ridge to contain the epoxy, which meant hand grinding a lip on both sides of the 900- ft.-long river.

The next step was to clean the residual dust from the surface in preparation for the primer application. During our sampling phase while working with a variety of primers, we found a way to actually make the epoxy separate, creating voids that mimicked bubbles in a river, and although this is not usually the desired effect when working with epoxies it worked well considering what we were trying to replicate. We gave the president of the store two options, seamless smooth epoxy or the bubbled effect; he loved the bubbled effect.

Once the primer had cured, it was time for the coloring. We used different color intensities of solvent-based dyes sprayed with the beginning of the river having very subtle color variation while gaining in color intensity as the river progressed, just as the actual river changes color at different points. Once the desired color effects were achieved, we then used water clear epoxy as the topcoat and, roughly one hour after the epoxy had been applied, came back with a solvent mist coat over the surface which created a hammered appearance. One of the biggest challenges working on this project was the fact that other trades were trying to perform their work simultaneously while we were performing our work. Not only could they not interfere while we were coloring or applying epoxy, but the next day the freshly placed epoxy needed to be covered so when they ran their equipment over it, the surface was not marred.

Needless to say, we were probably not the best liked trade because of our demands. The running joke with all the trades became "it's all about the river." This was a physically and mentally challenging project, with several 16-hour days. All parties involved including the owners and architects, as well as our team, were in total agreement that the hard work was well worth it, considering the outcome. I must say, it was a pleasure working with Mike M., Mike S., and Kelly.

Needless to say, after this intense project we all got our inner tube float with several cold beverages.

Bob Harris is the founder and president of the Decorative Concrete Institute, Temple, Ga., which provides hands-on training in architectural concrete. He has personally placed or supervised the placement of more than 3 million sq. ft. of decorative concrete and is the author of a best-selling series of decorative concrete books. For more information, call (877) DCI-8080 or visit www.decorativeconcreteinstitute.com.