A collection of concrete repair articles highlight some of the industry's popular techniques and products. 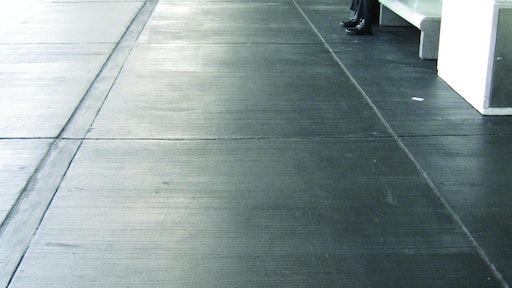 With numerous concrete panels experiencing faulting over the years due to the loss of load transfer, it was time for the 5 mile stretch of US 195 to be repaired. A major artery connecting Spokane, Wash., to Lewiston, Idaho, the concrete pavement dated back to the mid 1960s. Acme Concrete Paving, Inc. located in Spokane, Wash., took on the project using dowel bar retrofit as the repair method.

Jim Allen, project manager, says DBR was chosen because it is a cost-effective repair option that doesn't require removing and replacing the whole road. "Over time the concrete faults at the joints, and then the roads get rough," Allen says. "This stabilizes it from happening again."

To complete the repairs, Acme Concrete used two concrete cutting and breaking slot saws. The saws cut three slots at a time with a group of three in each wheel path . First, the crew would cut the slots and then jackhammer out the concrete in between the saw cuts.

After that, the crews would sand blast the slots and seal the transferred joints so the mixture pour wouldn't run down the joint. Next, they placed the DBR in the slots. During the day, traffic was reduced in some areas while the crew completed the repairs. Crews were able to complete prep work for a string of joints at several 1,000 feet spending 10 to 15 minutes at each joint.

Finally, they poured Rapid Set DOT Repair Mix from CTS Cement into the slots and then put a curing compound on the surface. After the mix set, the crews would come back and re-cut the joints. Once Rapid Set was poured, traffic was put back on the road within an hour.

Using mobile mixers to pour, the crew had a continuous mix process mixing just enough Rapid Set mix to fill the six slots and move ahead. When the project was completed, Acme Concrete had installed 8,500 DBRs between the existing concrete panels.

The biggest challenge Allen and his crew faced was the weather. "We started in spring and the weather was really wet," he says. "You can't do dowel bar retrofits when it rains because you can't cover the holes to prevent the water from getting in."

Turning the look of old concrete into new

After years of heavy foot traffic, the sidewalks around the San Francisco International Airport departure area were damaged and spalled. DSM Structural Concrete Services, of Grass Valley, Calif., was hired to repair the sidewalks. Donnie Militano, owner, saw repairing the existing concrete as the best option for the project.

To complete the repairs, DSM Concrete went with ARDEX CD Fine concrete dressing color black, a Portland cement-based repair product with polymers. ARDEX CD Fine produces a new wear layer and fills in small surface defects such as gouges and cracks. By using ARDEX CD Fine, DSM Concrete was able to resurface and restore without having to remove and replace the concrete surfaces ultimately making the repaired areas look like new. San Francisco airport chose to use color with the repair mix because originally the curbsides were black when poured, Militano says.

The project began with the DSM Concrete crew blasting the area with 4,000 psi hot water to both clean the area and open up the pours of the concrete. Then, the crew applied two coats of ARDEX CD Fine. First, a scratch coat was troweled down. Next, the crew trowel applied the top coat and used a magic trowel to wipe out all of the lines on the top coat.

About a half an hour after the repair product was applied, the surface was dry and the crew was able to apply a water-based, acrylic urethane concrete sealer.

In order to work with the high-foot traffic area, DSM Concrete completed the project 200 lineal feet at a time. "We would barricade a section off," Militano says. "Then we would apply the sealer, and then we would open it up to the public." The sections were open to foot traffic within 3 to 4 hours of completing the repairs.

The completion of the sidewalk repairs was so successful that the project was expanded to include the island areas and curbs. By the end of the project, DSM Concrete resurfaced 90,000 sq. ft. at the San Francisco airport.

Speed is critical on pavement repairs at Nassau Expressway project

The Nassau Expressway serves as a major artery leading to JFK International Airport in New York, N.Y. Approximately 40 years old, the roadway has seen increased traffic demands since its inception and recently underwent extensive repairs to several miles of its concrete pavement.

The New York DOT contracted Tully Construction, Flushing, N.Y., to perform both partial-depth concrete patching and full-depth repairs along 3 miles of the roadway. Because the Nassau Expressway is such a heavily used roadway, the New York DOT required repairs be done at night, between 9 p.m. and 6 a.m., with only minimal road closures. Tully devised a closure strategy and safety plan that allowed traffic to flow adjacent to the lanes being repaired.

Tully Construction performed the partial-depth patching with ProSpec Premium Patch 200. Mixed with 3/8-inch stone, the fast-setting, rapid strength gain repair product can be opened up to traffic in one to two hours. The Tully crews mixed the material on demand with a mobile mixer, which kept aggregate, water and patch materials separate until the mix was needed. The working time of the field mixed concrete is approximately 20 minutes.

DOT inspectors identified and marked the areas that required patching. Tully saw cut a rectangular perimeter around each area and removed the unsound concrete using lightweight pneumatic hammers. The Tully crews placed the mix directly from the mobile mix machine onto the roadway.

ProSpec Premium Patch 200 requires minimal finishing and texturing work. On the Nassau Expressway project, the material set in about 30 minutes, and crews were able to open up the repair area to traffic after about an hour. Tully used 2,500-pound super sacks of the patching material, purchased through construction materials supplier Axela Services, LLC. In all, about 7,000 square feet of pavement was repaired.

Other sections of the Nassau Expressway were in need of repairs beyond partial-depth patching. Those areas received full-depth repair with Super-Slab precast concrete panels by The Fort Miller Co., Inc. The Super-Slab is a precast slab-on-grade system for highway, exit ramp, airport pavement and other roadway replacement. The slabs are crane-set, and adjacent panels are connected with load transfer dowels.

“The advantage of this system is speed,” says Joe Rizzo, Northeast district sales manager with ProSpec. “They can perform full-width, full-depth repairs with nighttime closures instead of months behind barriers and the time it takes to pave. And they can open the road to traffic the next day.”

The placement of the Super-Slab precast concrete panels required the Tully crews to take down the existing road to the subbase. Crushed stone aggregate was placed and graded and the panels lowered on top. ProSpec’s Slab Dowel Grout was used to fill in around the load transfer dowel slots and also to fill in any voids between panels and existing pavement.

U.S. Route 66 — the “Main Street of America,” as it is known to many — dates to 1926 and is a quintessential American icon. But, even landmarks such as the “Mother Road” need to be repaired every so often to keep them up and running for another generation.

So, city officials in Winslow — the city made famous by The Eagles’ 1972 hit song “Take it Easy” — selected Phoenix-based dbA Construction to repair this famed federal highway. The 2009 project comprised of a full-depth and partial-depth repair of a 12-block section in downtown Winslow. In total, dbA Construction used 8,610 70-pound bags of QUIKRETE FastSet Concrete Mix for the project.

“QUIKRETE FastSet Concrete Mix had the right setup time with the traffic control constraints and the phasing of the project,” said Jay Cano, project manager for dbA Construction. The product achieves 3,000 psi in three hours and 7,000 psi in 28 days, provides 20-30 minutes working time for mixing, placing and finishing operations. The fast setting, high early strength concrete mix is designed to build or repair sidewalks, driveways, highways, bridge decks, parking lots and floors. It has less shrinkage than ordinary Portland cement concrete, and the mix is available with an integral corrosion inhibitor.

“With QUIKRETE FastSet Concrete Mix, crews had a product they could rely on to cure quickly without losing any compressive strength,” said Ken Diloreto, QUIKRETE sales representative.

Crews were able to keep lane closures to a minimum, ensuring traffic flowed through Winslow as routinely as possible while the roadwork was completed.

Of course, the location also added to the overall uniqueness of the project. “Working on Route 66 and getting to see all the tourists coming to stand on the corner of Winslow certainly made this project unique,” Cano said.

The Road to Repair