First such depth in the US with grouted friction piles support St. Paul Union Depot around aged wooden piles 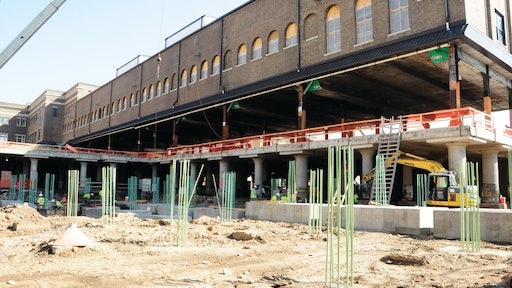 Engineering the renovation of the historic St. Paul, Minn., Union Depot made Carl Bolander & Sons the first contractor in the U.S. to bore large diameter, hollow core self-drilling anchors (SDA) to depths of 100 feet or more.

The 1920s-era depot is being renovated to serve as a multi-modal transit hub. Bolander's challenge is to assure at least 100 tons of working capacity for each of 260 friction piles, four to a column. Columns were originally formed on wooden piling and engineers sought a method that supported the columns without relying on the ancient timbers or requiring their removal.

Bolander’s grouters achieve the 5.3 batch specification of Type 3 Portland grout by adding three bags to 16 gallons of water in an Atlas Copco Unigrout Flex D grout plant. The Cemag agitator on the Flex D holds a full two batches, so it is not difficult to keep up during simultaneous SDA drilling and grouting.

It was the first Unigrout platform Bolander had ever used, and Drill Foreman John Sirek said the plant was easy for operators to learn and allowed them to control the pump flow and pressure independently during grouting.

Independent flow and pressure control is crucial in simultaneous drilling and grouting. The driller calls for more or less grout from the operator, who adjusts the rate with a lever on the Pumpac, the Unigrout’s unique grout pump. Less pressure is needed at the start of a hole than at 110 feet.

Controlling flow and pressure also proves to be an asset when drilling slows, such as when the bit encounters a boulder. The Pumpac will not exceed the pressure set by the operator, preventing damage to the surrounding formation and supports.

While some users still drill SDA with water to flush cuttings, most have been getting better results flushing with grout, as Bolander is at Union Depot.

There are several reasons. Even though holes in this site filled instantly with water – amply supplied by the nearby Mississippi River – only grout was being applied under pressure. Pressurized grout will fill cracks and voids better right behind the bit than it would if high-pressure water had been forced into the bore first.

Plus the driller can look for grout to come up from the bore, not water, which gives a better indication of the progress of the grouting. If for a time the driller sees only water rising through his grout, he knows he must wait for grout to fill in what is most likely an underground void the bar has encountered. The operator knows the hole has been thoroughly grouted when he sees his mix coming up.

Micropiles at Union Depot are creating a new support system for concrete columns. The columns will support the depot’s concrete railway deck and several parallel sidings.

Bolander is placing friction piles to relieve the original vertical timbers, which the columns stood upon for 90 years. An independent, third-party firm certified for the general contractor that test piles will exceed a 100-ton working capacity. Four micropiles installed at each column provide it with a total working capacity of at least 400 tons.

Brad Ames, Bolander’s project manager for the foundation work, described how the system works. Micropiles are drilled just outside the existing column base cap, four to a column. A wide, square groove is chiseled all the way around each original concrete cap to mechanically connect to the new, larger cap that will encompass it.

Steel dowels (rebar) are inserted horizontally all the way around in the groove. These dowels and the vertical rebar extending up from the micropiles will all be encased in the new 3-½-foot-thick caps, tying each column to its four new micropile supports as an integrated structure.

The project is on schedule for a late 2012 launch of the rejuvenated transportation hub for several bus lines, Amtrak high speed rail service between the Pacific Northwest and Chicago, the Metro transit system, and bicycle and pedestrian traffic. Additional light rail service will commence in 2014.