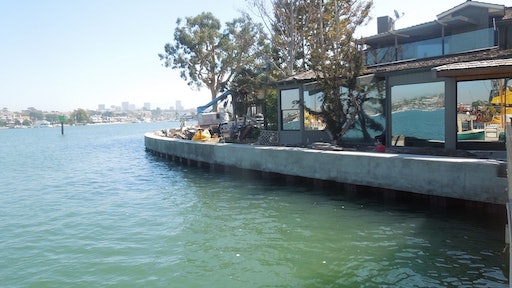 The only natural island in Newport Beach Harbor, the sea wall surrounding the private six-acre estate became compromised after years of exposure to the coastal elements.

Arguably one of the most valuable and exclusive pieces of real estate in the world, Bay Island in Newport Beach, Calif. is providing its 24 affluent residents a new level of comfort with the restoration of a protective sea wall. The only natural island in Newport Beach Harbor, the sea wall surrounding the private six-acre estate became compromised after years of exposure to the coastal elements. John S. Meek Co. constructed a replacement wall made of steel sheet pile with a 5,000 psi concrete cap, which required a concrete mix that would set hard in a short period of time so QUIKRETE 5000 Concrete Mix was selected for the job.

In place of a traditional concrete mix, the QUIKRETE 5000 Concrete Mix enhanced with an integral super plasticizer to maintain a low water-to-cement ratio was used to meet the challenging project specifications. A complicated, but well-choreographed process to restore the sea wall started with mixing up to four 3,000-pound bulk bags of QUIKRETE 5000 Concrete Mix in an industrial mixer on a barge situated 100-feet off shore. The mixed concrete was then placed in a 2,000-pound hopper and transported by boom crane to the Bay Island shore where it was quickly poured at a seven- to nine-inch slump into the sea wall cap forms, which were 1,260-feet long by 2.5-feet wide by 2.5-feet deep. In addition, the concrete mix was used to pour an 850-foot drain system and a 500-foot sidewalk on Bay Island. The entire project required nearly 40 truckloads of QUIKRETE 5000.

“QUIKRETE was very responsive and attentive to our needs on a very complex and demanding job,” says Jim Jilk, General Manager for John S. Meek Co. “Their collaboration and cooperation in supplying us material at staggered times and dates to accommodate our hectic schedule was critical to the success of the project.”

QUIKRETE 5000 Concrete Mix is a commercial concrete mix used for applications requiring high early strength and rapid strength gains. It has a walk-on time of 10 to 12 hours and is best used for any application requiring concrete in a minimum thickness of two-inches.