The QUIKRETE Companies, a manufacturer of pre-blended commercial-grade concrete products for building and rehabilitation projects, recently contributed to the restoration efforts at two water-bound locations along the South Carolina coast. 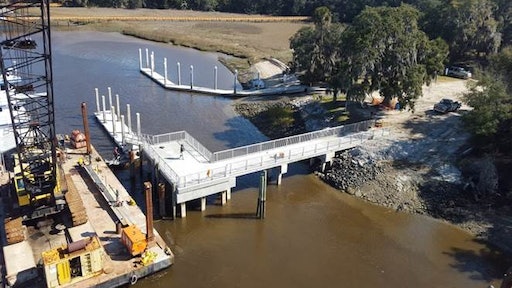 Daufuskie Island is only accessible by boat or ferry, so it critical that the primary boat landing on the west side of the island is always safely accessible. Beaufort County, which is responsible for maintenance of the boat landing, had Cape Romain Contractors replace all the slabs and pile caps with more than 1,000-square-feet of QUIKRETE Form & Pour.

The QUIKRETE Companies, a manufacturer of pre-blended commercial-grade concrete products for building and rehabilitation projects, recently contributed to the restoration efforts at two water-bound locations along the South Carolina coast. A high-flow, high-strength, shrinkage-compensated concrete delivered through a pump system for exceptional job site performance and efficiency, QUIKRETE Form & Pour was used to make structural repairs to a U.S. Marine Corp Air Station fuel pier in Beaufort, S.C. and a boat landing on Daufuskie Island, S.C.

An island between Savannah, Ga. and Hilton Head Island, S.C. about eight square-miles, Daufuskie Island is home to about 250 full-time residents. Rich in Civil War history and recognized on the National Register of Historic Places, Daufuskie Island is only accessible by boat or ferry, so it critical that the primary boat landing on the west side of the island is always safely accessible. Beaufort County, which is responsible for maintenance of the boat landing, had Cape Romain Contractors replace all the slabs and pile caps with more than 1,000-square-feet of QUIKRETE Form & Pour. The challenge of pouring the slabs and pile caps over water required that the QUIKRETE Form & Pour be mixed and delivered from a pump on a floating barge in the water.

QUIKRETE Form & Pour is a factory blended, micro silica enhanced formula of Portland cement, aggregates and chemical admixtures, used in building or repair applications requiring a high-quality concrete with a maximum aggregate size of 3/8”. QUIKRETE Form & Pour is appropriate for vertical and horizontal rehabilitation projects 1-½” to 24” because it can be mixed from a stiff plastic consistency to a free flowing virtually self-consolidating consistency. In addition, QUIKRETE Form & Pour features agents to minimize plastic shrinkage, and an air-entraining additive for freeze-thaw durability that is especially helpful in cold regions of the country. In 28 days, the material achieves 6,500 PSI at a seven- to nine-inch slump and more than 8,000 PSI at a four-inch slump.