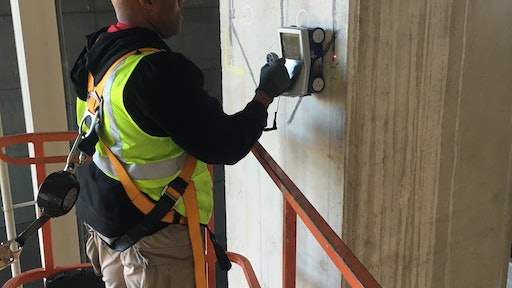 Scanning is conducted using a handheld device that combines a screen and antenna in one unit. The equipment is small and lightweight, which makes it easily maneuverable.

Many construction outfits are coming round to the notion that concrete scanning services are vital for job safety. Whether it’s retrofitting buildings to make them earthquake-proof or ADA-compliant, or remodeling existing structures to add capacity, it is essential to know exactly how to avoid hazards that may be contained within concrete. More and more they are turning to ground-penetrating radar (GPR) scanning to know exactly where to cut and drill to reach vital building components and avoid necessary structural supports and conduit lines.

Penhall Technologies is a division of California-based Penhall Company, which offers concrete cutting, coring, demolition, and repair services. Penhall Technologies specializes in GPR scanning services and has been using GPR to scan for concrete hazards in the U.S. since 2001 and in Canada before that. With a safety-driven mission and culture, Penhall considers GPR the most reliable, non-destructive way to locate targets and hazards within concrete structures prior to cutting or coring.

The company has 38 locations in 18 states and Canada, and operates across North America. They see a variety of regional building trends that affect the need for concrete scanning. In California and other parts of the West Coast, the company does a lot of scanning work for floor and wall retrofit core placement while retrofitting hospitals and universities for earthquakes. In Hawaii, their projects include beachfront property remodeling; rather than doing a full building demolition, builders strip the building down and use the concrete base to piece together an entirely new structure – one that is ADA-compliant. In addition, they scan for rebar in existing structures in cities with older buildings, for example San Francisco or Washington, DC.

“We’ve seen an increase in column reinforcement projects, where people want to add extra levels to a stadium, parking structure, or airport,” says Penhall Technologies President Simon James. “In the past they may have had to demo the entire structure and start over, but now because the engineer can avoid hazards within the concrete, they’re able to actually calculate how much weight that column can bear with extra reinforcement.”

James explains that until about 15 years ago, workers going in “blind” while cutting into existing structures often risked hitting live conduit. “Now many industry experts recognize that cutting into these hazard types can be devastating if people do not scan first. GPR technology makes the project far safer and I consider its use to be a real game-changer.” According to Penhall, structural radar imaging is a service that quickly pays for itself many times over.

Penhall has a zero accident safety culture – no accidents are acceptable. The company has established a set of safety rules, practices, and behaviors – before they even touch the equipment they are thinking safety. The process begins with site surveying, during which the GPR technician leaves the equipment in the car before the job. He has a notepad and meets with the customer on site. They discuss exactly what the customer wants to achieve. He walks around and writes down every hazard. This pre-task planning includes looking for any structural signs that may signal a potential problem. For example, if there is a horizontal beam, there may be conduit along the floor. The scanners are also looking for other trades that may be doing something unsafe near the concrete cutting area and would try to eliminate the danger.

James likens the process to the one used by detectives. “We ask them to talk to the customer and be aware of the environment, the floor, and other utility lines. They look in advance to see if there is post tension cabling, and note the gauge of the rebar – before they even get their equipment out. They can avoid a major disaster by taking these 10 to 15 minutes to scope out the job.”

They also encourage all scanners to share anything new or challenging and to contact another scanner “live” to get a second opinion, especially when as-built drawings do not match GPR data – a common issue. They have also gone directly to GPR equipment supplier GSSI when faced with unusual situations to get advice on data interpretation. The company holds internal debriefings as well as debriefings with their customer’s management team when necessary.

Getting beneath the surface with GPR

Penhall uses a variety of equipment for scanning. A large percentage of their projects are conducted using a handheld device that combines a screen and antenna in one unit. The equipment is small and lightweight, which makes it easily maneuverable. This is extremely important for ergonomics, since scanners can be on the job for eight to 10 hours a day. See Figure 1.

When they need to get more granular with the depth or for unusual spaces, they use a larger GPR control unit, coupled with a variety of antennas for specific needs. Examples include a 1,600 MHz general purpose concrete antenna, 400 MHz utility detection and mapping antenna, and the 2,000 MHz Palm Antenna, a compact, integrated concrete antenna for tightly spaced areas like corners, against walls, and around obstructions. “The ability to interchange antennas is very valuable in more complicated scanning situations, especially for in-ground utility scanning,” says James.

In addition to the actual GPR concrete scanning step, data analysis is crucial in the quality of the work and the ability to safely and accurately pinpoint hazards. “It is as important to investigate the environment we are scanning and not only understand and assess a hazard, but also to be able to evaluate anomalies in the data for potential issues,” notes Elizabeth Wilson, Penhall’s Director of Field Operations. “It takes knowledge, training, and experience to correctly interpret GPR data.”

This knowledge base is enhanced by Penhall’s training and mentoring philosophy. Two-person teams include a newer employee paired with a more experienced scanner. Expert scanners from California and Toronto hubs mentor staff, oversee their work, and check results.

The company believes it takes a special aptitude to understand the science behind GPR. To get employees with the right skills, they have begun to hire from outside the construction industry, for example those with either a geology or geophysics background. They also have a very active focus on hiring veterans, including those with either non-destructive testing (NDT) or bomb disposal training.

One example of how GPR can be used to ensure job site safety was at a major hotel, where the owners wanted to build a shopping mall on top of a multi-story compound. One option was to demolish the compound, which itself posed a host of costs and safety issues. Instead, the owners decided to actually build on top of the building by reinforcing the entire structure. To reinforce the structure, they needed to drill into the basement and install reinforcing rebar and concrete columns. “Drilling into the basement can do more harm than good,” says James. “We were able to core and scan the area. An accurate understanding of where all the existing structural elements were in the basement enabled the contractor to avoid damaging the existing structure.”

Another example is a case of a mini skyscraper in Canada in which a contractor was renovating two floors of a building and installing disabled bathrooms. Safely installing all the necessary plumbing was a challenge because the floors contained a variety of structural elements running through them, including post tension cable. James explains that cutting post tension cable is not only dangerous for the structure and integrity of the building; it’s extremely dangerous for whoever cuts it. The cables are under incredibly high tension and can whiplash. There are no drawings that accurately lay out where the cables are, or even if the cables are in the concrete.

With the help of GPR, Penhall’s staff was able to locate the precise location of existing cables and enable the cutting crew to cut safely without causing any damage. The plumbers were then able to go to the job site and safely renovate the bathrooms.

At a major university stadium project in Arizona (see Figure 2), contractors needed to reinforce columns and required a very accurate scan of the rebar placement. To ensure the structural integrity of the columns it was critical that they not cut into the rebar, and there was little to no room for error. Penhall analysts were able to sample scan columns with precision and allow the engineers and scanning team to build a project plan that would keep the project safe and moving forward.

Much like insurance, scanning brings a peace of mind for safety and cost savings that adds the real value. The bottom line is that cutting without scanning is a gamble. In addition, doing a small sample core or cut can help solidify data found in the scan. Taking a few minutes to test an area can prevent many potentially costly losses. The picture in Figure 3, of a project in Seattle, says it all. 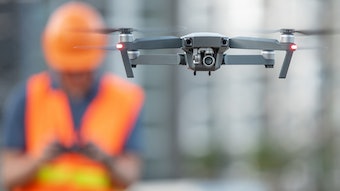 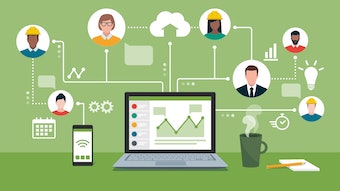 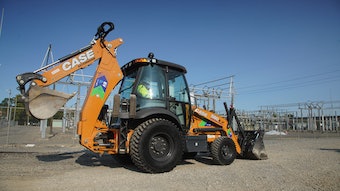