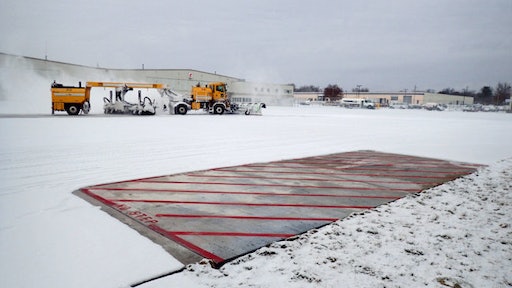 Iowa State engineers don't need a plow to clear snow from the heated test slabs they installed at the Des Moines International Airport.

Late last fall Iowa State University's Halil Ceylan and his research team from Iowa State's Program for Sustainable Pavement Engineering and Research installed two, 15-by-13.5-foot test slabs of electrically conductive concrete into the apron at the southwest corner of the Elliott Aviation hangar on the north side of the Des Moines International Airport. The hangar is in the middle of the general aviation apron devoted to smaller aircraft.

The test slabs of electrically conductive concrete are made up of 1% carbon fiber and a special mix of cement, sand and rocks. The carbon fiber allows the concrete to conduct electricity, but there is some resistance to the moving electrons, which creates heat.

Alireza Sassani, a doctoral student in civil, construction and environmental engineering, led studies of the concrete mix. With help from the National Concrete Pavement Technology Center based at Iowa State, he prepared hundreds of concrete samples in the lab to find just the right combination of compressive strength, tensile strength, workability, durability and electrical conductivity.

The test slabs at the Des Moines airport are 7.5in. thick in two layers -- the bottom 4 in. are regular concrete, the top 3.5 are electrically conductive concrete. Between the layers are twelve metal electrodes, six per slab, running the width of each slab. The electrodes are wired to the nearby hangar's power supply.

The slabs are also wired with various sensors: temperature probes, strain gauges, humidity sensors and more. There are two surveillance cameras mounted nearby. And the team just acquired its newest research tool -- a high-grade thermal camera.

Seven hours "is way more than enough to melt an inch of ice or snow," Ceylan said.

While the installation costs would be higher than regular pavements, the heated pavement technology also saves on the cost of plows, de-icing chemicals and wastewater treatment of chemical runoff.

The versatile single component cementitious mortar can be used for various repairs to concrete substrates.
ChemMasters Inc.
May 21, 2019

In six easy steps, this video will show you how to use Sakrete stucco mix to fix holes and cracks making walls look just like new
February 9, 2018
Concrete

Here are some tips on how to use Sakrete products for home improvement projects
February 8, 2018

In five simple steps, this video will show you how to successfully put up a fence post and have it set in just 30 minutes with Sakrete ready mix concrete
February 8, 2018

Slag Cement Shipments in the U.S. Continue to Grow

Will My Project Benefit from Control Flow Concrete?

A new type of highly flowable concrete bridges the gap between conventional and self-consolidating concrete.
January 9, 2018
Follow Us