The Constructable Model: What’s In It For You? 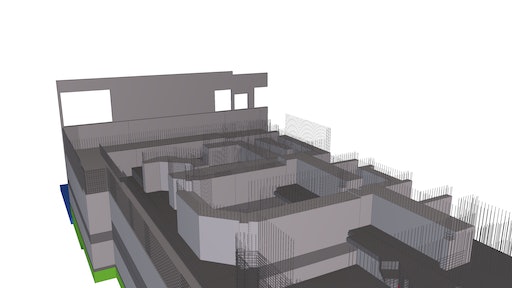 To be useful to a concrete contractor, a 3D project model must be constructable. That means it includes accurate, actionable geometry and data that concrete contractors can use to estimate, plan and manage pours. It will include accurate geometry and accurately sized and located embedded items to ensure conflicts are immediately obvious. It also might include pour breaks, rebar, and formwork and shoring detail, as well as associated data such as grade and mix designs.

Constructable Models: They’re not just for the big jobs.

Concrete contractors began testing the waters with 3D modeling three years ago. Their successes have spurred others to follow suit, and the rate of adoption has rapidly accelerated within the last 12 months. This is largely due to improvements in 3D modeling tools that now include functions geared towards the specific needs of concrete construction trades as well as a healthier economy

The adoption of the technology is directly related to management’s vision and desire to improve internal processes and become more competitive. Today, concrete contractors building constructable models range from small businesses doing local work to national companies, and their projects range from building homes to high rises. When a concrete contractor is the first to use constructable models in a market, competitors commonly follow suit soon thereafter—a strong testament to the value of the technology.

Concrete contractors might delay adopting 3D modeling for several reasons; mostly due to misconceptions on what it entails and not understanding how it can benefit the business. In most cases, a concrete contractor’s only exposure to models are the design models supplied by engineers, which are often of little use to them as they lack detail and are very different from models created for constructability. Others may use BIM when the general contractor demands it, but not on projects where it’s not a requirement because they don’t fully understand how it can benefit their business through internal process improvements.

Some concrete contractors believe adopting 3D modeling will be too much of an effort and too great a change to tackle, especially when business is brisk. Or they believe they will have to buy expensive computers and hire a BIM expert. In truth, most computers used for CAD will support 3D modeling, and current employees can be trained to build and use constructable models within a few days. There is no reason to hire a BIM expert since the purpose of using 3D modeling is to help staff do their jobs better. Most companies phase the technology into their businesses. They may start by building constructable models for estimating or planning and then expand the use to other areas, mastering each before moving on.

Another barrier to adoption is the belief that building a model is difficult and time-consuming. In reality, working from the contract documents supplied by the structural engineer, it doesn’t take much time to build a constructable model. Moreover, the process of the building the model provides a greater understanding of the job. Taken together, the benefits far outweigh the investment.

The Benefits of Using Constructable Models

Concrete contractors that build constructable models improve their internal processes and productivity, which directly impacts profitability. The model can help them throughout the project lifecycle, from estimating the job through construction.

Many concrete contractors and self-performing general contractors have already experienced the productivity gains of building constructable models, including Cidon Construction, Haselden Construction and The Weitz Company.

Within six months of generating estimates from constructable models, UK concrete contractor Cidon Construction reduced the cost to create bids by 50 percent. They expect to reduce this by another 10 percent over the next six months. Moreover, their ratio of winning bids has improved from winning one in ten to winning one in four. This because the information they are getting from the model is complete and accurate, which increases their confidence in the numbers and allows them be more aggressive in their pricing.

Haselden Construction has seen a 33 percent reduction in concrete waste during estimating and placement since they began using constructable models. In addition, their quantitative errors in estimates have been reduced to nearly zero. They also report a 75 percent time savings when pricing change orders. On the jobsite, they have reduced the time it takes to lay out points, typically reducing the task from a week to a day. Finally, they’ve cut their paper waste by 66 percent.

The Weitz Company was able to layout over 500 points, including sleeves and anchors, on a 15,000 square foot deck in a single day by taking information directly from the model to the robotic total station. This was a dramatic time savings over using tape and string.

The benefits of building constructable models extend across the concrete process. Some such as greater clarity and understanding of a job and better communication and collaboration with the field crew or other stakeholders are not quantifiable but are clear benefits for process improvement. Other benefits are distinctly quantifiable, including estimating and construction site productivity gains. Concrete contractors who embed constructable models into their businesses will quickly see process improvements, resulting in winning more new and repeat business, better results, cost savings and profit.

Architects on the renovation of a 280-year-old New Hampshire church utilize the non-destructive investigation technique to save time and money in the construction of the church's expansion.
Geophysical Survey Systems (GSSI)
April 27, 2021
Technology & Services