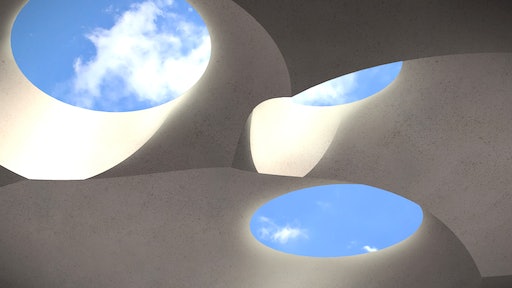 The project, constructed entirely out of site-cast tilt-up concrete, will be located along the shore in Highlands, N.J. overlooking Sandy Hook, an area severely impacted by the devastating storm. The memorial will be a pavilion that provides shelter and a place to gather. “We wanted to make something that can serve a purpose beyond a monument that can only be viewed,” says Tod Williams. “Three conical oculi in the roof canopy will join to reflect the coming together of the community, both residents of Highlands, N.J. and all those affected by Sandy, to help to rebuild.”

The Tilt-Up Concrete Association (TCA), a nonprofit international organization dedicated to the advancement of the tilt-up concrete construction industry, is spearheading the project as a continuation of the TCA Community Project Program. Developed in 2010 by the TCA, the program encourages collaboration between its diverse network of member companies and provides a vehicle by which these companies can give back to their communities. Projects are considered by a local committee in conjunction with the TCA’s International Convention held each year.

“The TCA is honored to have such a respected and influential firm involved in this project,” says Mitch Bloomquist, executive director for the TCA. “TWBTA’s focus on public work, their exploratory approach and masterful application of material and texture were just three of the many reasons we approached them to lead this project.” Over the past thirty years, the firm has garnered local, national, and international acclaim and press. Most recently, Williams and Tsien were awarded an honorary international fellowship to the Royal Institute of British Architects, the National Medal of Arts from President Barack Obama and the Firm Award from the American Institute of Architects.

“When Hurricane Sandy hit the East Coast in 2012 it was an indelible demonstration of the power of nature and the fortitude of community. We are honored to have the opportunity to celebrate the strength of people helping one another to remake their homes, their businesses and their lives,” explains Billie Tsien. “In our architecture we have consistently used concrete - because of its ability to last as well as its potential for underlying beauty. The pavilion will be cast in concrete using the sands and shells of the Highlands beach, forming a communal place of gathering that symbolizes the grounding of home, while also connecting to an aspiration of unity.”

In March 2015, TWBTA began working with a team of experts in tilt-up design and construction to explore the method’s architectural potential, as one aspect of the program is to bring awareness to the versatility, applicability and beauty of tilt-up.

“Most tilt-up building projects involve vertical wall panel surfaces orthogonally arranged to best capture the economic efficiencies associated with the method. This does not have to be the case,” says David Tomasula, managing principal with LJB Inc. “It is exciting to see the creativity the entire design team has brought to this project, especially the combination of surfaces (flat bottom, sloped top, and the varying surface of the oculi) that comprise the site-cast tilt-up roof panel. With the durability that building owners recognize in tilt-up concrete, this memorial will be a permanent reminder of the perseverance following Sandy.”

According to Bloomquist, while the exploration of tilt-up is a theme of the program as a whole, it is, of course, a subordinate component of the project.

“As this year’s convention is being held in New Jersey, the local committee wanted to do something to acknowledge the impact and response to Hurricane Sandy, the second-costliest weather disaster in American history,” says Kim Corwin, CEO of A.H. Harris and chairperson of the TCA’s local host committee. “Many of our employees, customers and friends were severely impacted by the storm and we are proud to commemorate their resilience.”

“First and foremost, this program is about giving back,” Bloomquist says. “The TCA and its members are providing material, products, professional services and labor at absolutely no cost to the community.”

Bob Murray, general manager for Alston Construction Company explained that while this project is complex and will require an extraordinary effort to complete in just three months, it’s well worth it. “We are proud to be leading the construction team for such an important project. This is the community we live in and work in. We could not pass up this opportunity to give back.”

“It is not only and honor but a privilege to have this project built in our community,” says Rebecca Kane, Highlands Borough Council President. “Our small town, that has endured so much over the last three years, has really grown to encompass all that this project represents. This pavilion will be strong and steady and will give the community a sense of togetherness in these post-Sandy times.”

A public dedication of the project is being planned for October 1, 2015.