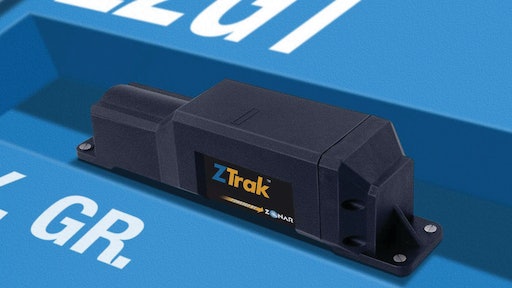 Elcon has Zonar asset tracking devices installed on most of its equipment, including trucks, and off-road equipment, and many other items. The ZTrak provides equipment managers with locations of dispersed equipment through cellular and GPS communication.

When Dave Rogers signed up Elcon Corporation for Zonar's fleet management system to keep tabs on company equipment, he didn't think he would be using it to track and catch thieves red-handed with $70,000 worth of his company's equipment in a remote area of northwestern Oregon.

The equipment - a Kubota mini excavator loaded on a TrailMax tiltbed trailer and pulled by a Ford F550 flatbed truck - disappeared from a highway jobsite in Tacoma, WA, at around 3 a.m. Wednesday, Feb. 6th, Rogers said. All of the equipment was recovered by Columbia County Sheriff's Office deputies on a remote logging road about 40 miles northwest of Portland, OR, just over 24 hours after it was taken. The deputies also took suspects into custody as a result.

"We bought and installed Zonar's asset tracking system to help us keep track of equipment that goes to many jobsites throughout the Pacific Northwest and Alaska," said Dave Rogers, fleet manager with the Everett, WA, company.

Elcon has Zonar asset tracking devices installed on most of its equipment, including trucks, and off-road equipment, and many other items.

"Zonar has worked very well for us in helping us track our equipment. Having it installed has been instrumental in helping track and in this case recover equipment," said Rogers. "The excavator would likely not have been recovered were it not for the tracking device."

At around 8 a.m. Wednesday, company officials discovered that the missing excavator and truck and trailer hauling it had traveled to Longview, WA, near the Oregon state border, when the tracking device sent a ping back to the company through Zonar's web-based Ground Traffic Control portal. The tracking unit continued sending back periodic messages, Rogers added. As a result, Elcon managers were able to monitor its movement and keep law enforcement agencies aware of its current locations until it was finally recovered in Columbia County, Oregon.

"The excavator was scheduled to work on a highway project starting Tuesday (Feb. 12)," Rogers said. "If we hadn't been able to recover the excavator, we would have had to rent a replacement at considerable expense.

"The equipment was damaged and will have to spend some time in the shop," Rogers added. "But that will cost considerably less than what we would have paid to rent replacement units. We certainly plan to continue to use Zonar’s ZTrak and V3 onboard computers on other company equipment post this incident."

Designed to withstand harsh outdoor environments, ZTrak provides equipment managers with locations of dispersed equipment through cellular and GPS communication. The V3 is Zonar’s next generation GPS tracking and vehicle diagnostics system. The V3 is simple to install and captures data in five dimensions: latitude, longitude, time, odometer, and fuel consumption. The unit also transmits fault codes from the vehicle to the maintenance shop for remote diagnostics and efficient service scheduling.

According to the 2011 Theft Report from the National Insurance Crime Bureau and the National Equipment Register, of the 11,705 theft reports submitted to National Crime Information Center in 2011, 911 of them involved pieces of off-road equipment manufactured by Kubota and 328 involved excavators. And only 21 percent of stolen equipment was recovered in 2011. Annual estimates of the cost of equipment theft range from about $300 million to $1 billion and the average estimated value of a stolen piece of equipment is $22,300.

"Equipment owners can reduce the likelihood of theft and improve the chances of recovery by taking simple preventive steps that are both cost-effective and measurable," according to the report.