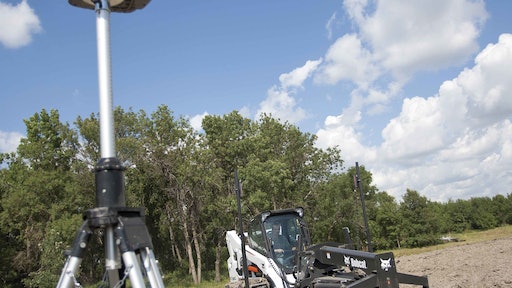 The grader attachment grades surfaces with precision and control while maximizing productivity. It features blades that move six different ways and a front bolster that oscillates 12 degrees to the right or left, allowing for grading on any surface.

As a contractor you know proper surface preparation prior to construction contributes to the uniform and consistency of your finished product. Thanks to the latest in technology developments, Bobcat Company and Caterpillar Inc. have developed tools to help you perform your job more efficiently and save money in the process.

Laser-Guided System
Designed for compact loaders, the Bobcat laser guided system helps contractors grade with greater accuracy in less time. “A larger factor contractor's would want to worry about is the cost of doing the job,” says Katie Althoff, Attachment Product Specialist at Bobcat Company. “These costs include material costs and operating time. When a contractor uses a laser-guided system, you are able to affect both of those factors.”

Operators will increase their efficiency to reduce fatigue since they can focus on the machines’ travel, rather than the blade position. Additionally, Althoff says fewer laborers are needed on the jobsite because there is no need for a crew to continually check grade on the jobsite.

“If you can produce a more accurate grade, you will use less material and save money,” Althoff says. “You’ll be more accurate, and you won’t have to put in more grade fill. The end product is better. The job is completed faster. You’re using less material and hopefully you’re passing these reduced costs on to your customer to make your bids more competitive.”

Laser Grading Attachments
The grader attachment grades surfaces with precision and control while maximizing productivity. Designed for use in landscaping, curb and concrete flatwork, the grader attachment features blades that move six different ways and a front bolster that oscillates 12 degrees to the right or left, allowing for grading on any surface while minimizing the effect of uneven ground.

The box blade attachment allows contractors to grade with laser accuracy. The box blade incorporates end wings to help carry soil and features elevation control, which allows the box blade to travel up and down slopes while still delivering accurate results.

On the jobsite, the laser transmitter is mounted on a tripod to provide a 360-degree plane of reference at a set elevation and slope. Laser receivers, mounted on a mast attached to the box blade or grader attachment, capture the light from the laser transmitter. In manual control mode, the receivers inform the operator via LED lights when the blade needs to move up or down, or that the blade is on grade. In automatic control mode, the receiver informs the blade that it needs to move up or down to stay on grade.

With the box blade attachment, one receiver—mounted in the middle—moves the entire blade up or down. With the grader attachment, two receivers are mounted so that so each side of the blade will adjust independently.

Moving the grade up or down, beginning at 0.1 inch increments and up to two inches in either direction makes it easier for the operator to make adjustments on-the-fly without leaving the cab to raise or lower the transmitter.

For added efficiency, the company introduced a 96-inch blade and a 108-inch blade to complement the previous 84-inch blade set-up. “This introduction has had a big impact on how people see the system being used,” Althoff says. “As you can imagine, with a 108-inch blade, a contractor can get a lot done on the jobsite.”

Ease of Use?
Operators who are familiar with running this type of equipment will find the system to be learned quickly. For those contractors who might be weary of embracing new technology, Althoff says not to worry. “The overall setup time is about 30 minutes and all a contractor needs to do is plug in the device, fill in your slope, set your tripod on top of the grade stake and set up your receivers. It’s not as complicated as people might think.”

Althoff offers this piece of advice, “Don’t be afraid of the technology that is coming. It will help you do your job better and more efficiently.”

In fact, Althoff sites one contractor she recently spoke with who said, “I need to buy a laser system because the competitive contractor in my area has one and he is beating me on every single quote.”

“This is the perfect example of contractors needing to keep up with the competition,” she notes. “It’s in your best interest to be competitive as well. If there isn’t a competitor in your area, now is the time to learn more about these technologies and take advantage of the opportunity to become more proficient and in turn, win bids and quotes with your clients.”
As far as the future is concerned, Bobcat is looking at other areas to expand to a full line of technology enhancements. “There are different uses for the laser guidance systems and exploring how else we could use the system beyond the grade line is exciting,” Althoff says.

Excavator Guidance Systems
While excavator guidance systems have been around for a few years, the adoption rate has been slow. Caterpillar recently introduced excavators with integrated grade control technology to help customers realize the true potential of this technology. Caterpillar offers an integrated 2D guidance system that can be simply upgraded to 3D to allow customers to witness the productivity gains with minimal risk.

Scott Hagemann, market professional for the machine control and guidance group, Caterpillar, says customers have been slow to adopt grade control technologies for excavators because the systems are indicate only. “As the customers transfer to using technology on motors graders and dozers, they will not want to set stakes just for the excavator. Without trying the technology on their excavators, the customer does not know the productivity being lost. Once the system is demoed, they see how much of a benefit even indicate-only technology is and the need to have it.”

Cat Grade Control Depth and Slope is a 2D depth and slope guidance system designed to help guide the operator to a preset grade. Caterpillar chose to integrate the system on its standard 323F L excavator, which is in the highest volume size class—50,000 to 55,000 pounds. “It is a 23-metric ton machine,” says Brian Stellbrink, market professional for F Series Excavators, Caterpillar. The system comes standard on all excavator model configurations equipped with the 9.5-foot stick. “It needs only to be activated at the dealership as part of a routine delivery.”

While integrated on the 323F, the system makes sense for other size excavators, as well. “It is beneficial to order Depth and Slope on all sizes,” says Hagemann.

The operator can now set the desired depth and slope from inside the cab. “For example, if you’re doing a 10 foot cut with a two percent slope, you can enter that in the monitor, bench that bucket off a known point and start to dig,” says Stellbrink. “[The system] will guide you through audible alarms in the cab and a standard display on the monitors to dig toward that preset grade.” It helps operators to be more productive, finish the job faster and rely less on ground support. It can also lower labor costs, since you are not as reliant on a grade checker.
“The 2D system will help our customers dig footings and basements where a flat surface is needed, or dig a sloped surface for a drainage pipe,” says Hagemann.

Cat Grade Control Depth and Slope is available on excavators only from the factory. “This system can-not be installed at the dealer,” says Hagemann. “The basic advantage of having Cat Grade Control Depth and Slope installed at the factory is integration. We can route the harness out of harm’s way. We relocate the bucket sensor from the bucket linkage, which is exposed to being damaged, and put the sensor into the bucket cylinder.”

He adds, “For the operator interface, we use the standard display that is in every one of our F Series excavators. We also use the joystick switches to control the functions of the system, so operators don’t have to remove their hands from the controls to interact with the Depth and Slope system.”

Cat Grade Depth and Slope makes it easy to transition to 3D. “It’s a building block to go to the full 3D system,” says Stellbrink. “It’s very cost effective even for those customers who know they want a full 3D GPS system. This system is working very well for those who are digging basements, single trench digging — task-specific jobs within a given jobsite. As you start to move around a jobsite and load plans, that’s often when customers will go to full 3D GPS, which can be built directly on top using the same sensors. The 3D GPS basically adds a radio, masts on the back of the machine, satellite receivers and one more monitor inside the cab.”