Technologies such as AR could play a significant role in changing how construction equipment service technicians resolve technical issues and how companies attract a new generation. 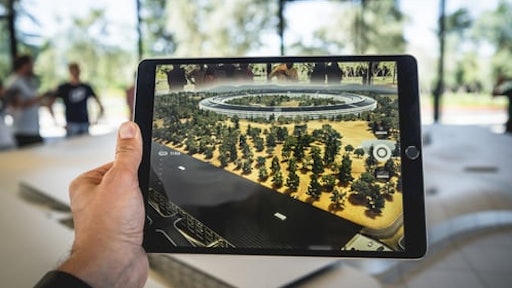 With AR, service technicians would be able to hold up a smartphone or device to see information displayed right in front of them as an overlay. All they would need is a camera and the software to run the technology.
UNSPLASH

Augmented reality (AR) is a technology that mixes digital elements with real-world surroundings by using a camera on a smartphone or other device. This is not to be confused with virtual reality, which involves the immersion into a simulated experience that completely shuts out the physical world. Instead, AR seeks to enhance the physical world.

Korry Kobel, director of engineering at JLG Industries, discussed the benefits of incorporating AR technology into the service technician field while speaking at the Access, Lifts and Handlers (ALH) Conference & Awards on September 12-13, 2019, in San Diego.

Augmented or “mixed reality” technology has been gathering pace across a multitude of industries for its ability to overlay digital information to the human field of view in real time. Kobel believes equipment service technicians could really benefit from using this technology, as well.  ­

Historically, service technicians have had to search through manuals upon manuals to find the information they needed. This could be a lengthy process if the technicians didn’t already have an idea of where to quickly find that information.

But now, it can go a step even further. With AR, service technicians would be able to hold up their smartphone or device to see the information displayed right in front of them as an overlay. All they would need is a camera and the software to run the technology.

For example, AR could help technicians quickly execute field repairs. A technician would be able to go up to a machine, hold his phone in front of it and see instructions, data or other valuable information displayed right on the screen.

Kobel explained that sometimes technicians go into environments that are loud and chaotic. AR would help simplify that, and allow the technician to do his or her job without the added distractions.

“Augmented reality is that tool that can help cut through the noise and chaos,” Kobel said.

The ability to simplify their workspace with AR would optimize service workflows and allow technicians to resolve technical issues more efficiently than ever before.

The equipment industry is having more and more challenges finding service technicians, Kobel pointed out. He recalled a poll which said that 64% of Millennials wouldn’t work in the industry even if they were paid more that $100,000 a year.

Kobel attributed this to what he called the “expectation of education.” More Millennials have and are getting four-year degrees than past generations. This means that over time the industry has seen a decline in service technicians as more workers are seeking higher education.

There is a likelihood that Generation Z will follow with the same expectation of education, and possibly even more so. Those in Generation Z have grown up with information always at their fingertips, said Kobel. Their expectations of learning are simply much higher, yet he remains optimistic.

Read Next: Five Tips to Recruit Gen Z to the Construction Industry

“The good news is that over a third of the generation is willing to work in this industry,” he said. “So, I don’t think it’s as bleak as the poll shows.

Kobel explained that adopting AR technology could help attract this new generation of technicians because it would give them what they already expect—which is instant access to information.

For Kobel, there is no doubt that adopting AR into the equipment industry would play a significant role in changing how technicians do their work in a positive way. It would help them access information and resolve technical issues much faster. It would also help the industry attract a new generation of workers by meeting their growing expectations of technology.

Want to learn more about workforce development in the construction industry? Register for these related education sessions or check out these companies on the show floor.

VR, AR and MR Will Be The Most Disruptive Technologies of the Next Decade