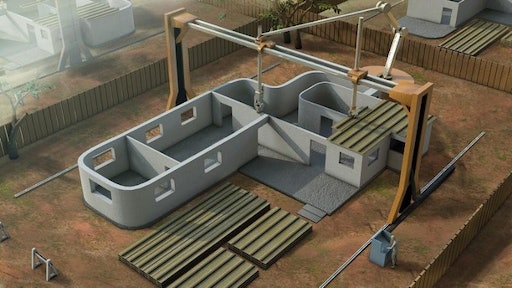 Contour Crafting automates the construction of whole structures and radically reduces the time and cost of construction.

Contour Crafting, a computerized construction method that rapidly 3D prints large-scale structures directly from architectural CAD models, has been awarded the grand prize of $20,000 in the 2014 "Create the Future" Design Contest.

Contour Crafting automates the construction of whole structures and radically reduces the time and cost of construction. The large-scale 3D printing technology is revolutionary to the construction industry and could lead to affordable building of high quality, low-income housing; the rapid construction of emergency shelters; and on-demand housing in response to disasters. NASA is looking at the technology for building moon and Mars bases.

Behrokh Khoshnevis, a professor at University of Southern California, who invented Contour Crafting, views this invention as a proven concept. "Bringing 3D printing to construction is bringing a concept to a proven application. For many years, building has been done in layers – concrete foundation blocks, brick laying, structural framing, etc."

Contour Crafting was among the 1,074 new product ideas submitted in the 12th annual design contest, which was established in 2002 to recognize and reward engineering innovations that benefit humanity, the environment and the economy. This year's design contest was co-sponsored by COMSOL and Mouser Electronics. Analog Devices and Intel were supporting sponsors.

"This year's contest really knocked it out of the park with a record number of entries and tons of truly forward-thinking product ideas," said Bernt Nilsson, Senior VP of Marketing at COMSOL.  "All these creative designs are a testament to the power of engineering innovation for building a better tomorrow. COMSOL is grateful for the opportunity to support the Create the Future Design Contest that does such a phenomenal job in promoting and recognizing simulation-driven product design. Kudos to all the entrants for sharing their amazing ideas and congratulations to this year's winners."

Kevin Hess, Vice President of Technical Marketing at Mouser Electronics added, "We'd like to congratulate this year's winners for their ingenuity, and commend all of the entrants for taking part in this exciting program that fosters technological innovation. As a distributor of leading technologies, 'Creating the Future' is very much at the heart of what we support here at Mouser, and we are excited to help design engineers and want to thank them for their important contributions. Engineers really deserve the credit for the amazing ingenuity we are seeing today in electronic design."

In addition to the grand prize of $20,000, first-place winners (of Hewlett-Packard workstations) were named in seven categories:

Consumer Products
NanoFab Lab...in a Box!
Jonathan Moritz (Team Leader)
An educational kit that brings nanomanufacturing out of the cleanroom and into the classroom.
http://contest.techbriefs.com/2014/entries/consumer-products/5060

Sustainable Technologies
Ecovent Systems - Making Every Room the Right Temperature
Dipul Patel (Team Leader)
A system of wireless vents and sensors that makes any forced air heating and cooling system smarter by directing conditioned air where it's needed most.
http://contest.techbriefs.com/2014/entries/sustainable-technologies/4391

Finalists were selected by senior editors at Tech Briefs Media Group and judged by an independent panel of design engineers. Visitors to the contest website could vote on entries, with the 10 most popular designs awarded a Sphero mobile game system by Orbotix.

3D Printable Mortar to be Released in 2016

Telematics, video and communication apps can help ensure safety of drivers for your construction fleet.
Curt Bennink
October 8, 2020
Follow Us