The National Science Foundation awarded grants to three universities to develop new technologies and materials to be used in biomanufacturing, cyber manufacturing and eco-manufacturing. 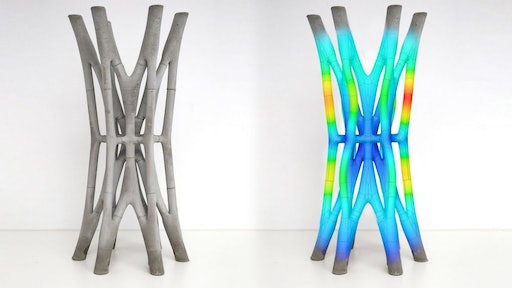 Teams of researchers at a handful of universities will work together to research and develop new building materials using protein-based polymers, which are strong but light materials that make up spider webs, dragonfly wings and caterpillar silk thread.

The research is funded by $40 million in grants from the National Science Foundation (NSF), which is leading an initiative it calls “the future of manufacturing.” The goal is to develop new technologies, processes and skills in the fields of biomanufacturing, cyber manufacturing and eco-manufacturing.

How does that play into construction? According to the NSF, cyber manufacturing could "create new ways to increase the flexibility of assembly lines, opportunities for modular construction and the speed and reliability of producing quantum and semiconductor technologies."

At the University of Pennsylvania, one team will focus on “self-morphing building blocks,” or cell-sized modules that can be assembled into human-scale structures, maximizing strength and minimizing weight in the same way evolution has optimized biological organisms.

Another team will investigate “bioinspired distributed agents,” or tiny robots that work like ants to collectively complete a task. A swarm of such robots, each following its own simple set of rules, could assemble complex, intricate structures, similar to what a 3D printer would.

“Our investment provides industry with manufacturing tools that currently live only in the laboratory, or the imagination,” says NSF Director Sethuraman Panchanathan. “Through the convergence of such fields as robotics, artificial intelligence, biotechnology and materials research, future manufacturing will create revolutionary products with unprecedented capabilities, produced sustainably in facilities across the country by a diverse, newly-trained workforce.”

Humans have been designing better construction materials for millennia, but for many applications, even the most advanced technologies can’t compete with evolution.

For example, the best mix of qualities found in biological materials, such wood, chitin and bone, originate at the cellular level. They are all composed of nanoscale building blocks that have been improved by natural selection over millions of years, with geometries that provide maximum support at minimum weight.

At the University of Pennsylvania, the five-year, $4.6 million grant will help researchers collaborate with scientists at Princeton University, Rowan University and Rutgers University Camden on the issue.

Inspired by these biological materials, one of the Penn teams, featuring Shu Yang, professor in Penn Engineering’s departments of Materials Science and Engineering (MSE) and Chemical and Biomolecular Engineering (CBE), Liang Feng, associate professor in MSE and Electrical and Systems Engineering (ESE) and Masoud Akbarzadeh, assistant professor of architecture in the Weitzman School of Design, will develop artificial structures that are load-bearing, lightwave-guiding, sound insulating, and self-morphing from the nano- to macroscales.

Using geometry-based structural optimization techniques, Akbarzadeh has created several human-scale structures out of concrete and glass that mimic evolution’s approach toward minimizing the use of material, while maximizing its performance.

Using Yang and Feng’s expertise in nanoscale and responsive materials together with the team’s scalable manufacturing techniques, the group will produce similar structures from bio-based and bioinspired composite materials that can be eco-friendly, reused, repurposed and upcycled on demand.

Through a modular design, the researchers will be able to combine these building blocks to produce meter-scale components and structures with unique geometries and advanced performance. The group’s proposal is organized under the program’s “eco-manufacturing” initiative, as these large-scale systems will be able to morph into final design configurations with less waste and with materials that have less impact on the environment.

The research will not only push the envelope to achieve additional performative functions with reduced materials and cost, but also train an inclusive and responsible future Science, Technology, Engineering, Arts and Mathematics (STEAM) workforce.

The other Penn project funded under the NSF’s Future Manufacturing program is also inspired by the manufacturing techniques the natural world has evolved, but is organized under its “cyber manufacturing” initiative.

It will see Jordan Raney, assistant professor in the mechanical engineering and applied mechanics (MEAM) department and Mark Yim, professor in MEAM and director of the GRASP Lab, develop a new paradigm for manufacturing where structures are assembled by swarms of simple, tiny robots.

Though each ant in a colony — or each cell in the body — has limited abilities and only local information from its immediate environment, the collective behavior of many agents can produce complex structures.

Raney and Yim envision artificial systems that work in a similar way, with many autonomous agents each following simple local cues, such as temperature, chemical gradients or light intensity, to achieve a global goal that the individual agents may not even be aware of.

This project is a smaller, exploratory “seed” grant, which will provide roughly $500,000 toward the exploration of this new paradigm of additive manufacturing.

According to the grant application abstract, "Production of complex structures via a swarm of simple, distributed agents is ubiquitous in biology (e.g., ant colonies, cellular formation of tissues), yet technological limitations have traditionally prevented this approach in manufacturing."

The paper goes on to say, "in contrast, traditional manufacturing, from machining and casting to modern approaches such as roll-to-roll or additive manufacturing, require a deterministic plan which is executed in a series of precise, sequential steps."

Robotics, miniaturization and inverse design tools will create a new platform in manufacturing using the swarm approach in nature. "The advantages of this approach include (1) the ability to produce complex multimaterial, multiscale structures without predetermined steps and (2) extreme robustness to manufacturing errors."

This Future Manufacturing Seed Grant (FMSG) will establish the theoretical foundation and the practical tools necessary to pave the way for this nascent area of research and to understand its feasibility. In addition to the technical aspects of this work, this research could lead to a new area of manufacturing with beneficial economic and workforce implications to mid-sized and large manufacturers, the paper states.