DroneDeploy survey finds demand for aerial laser scanning highest of all industries among contractors; more than half of construction users plan use drones for more than aerial maps 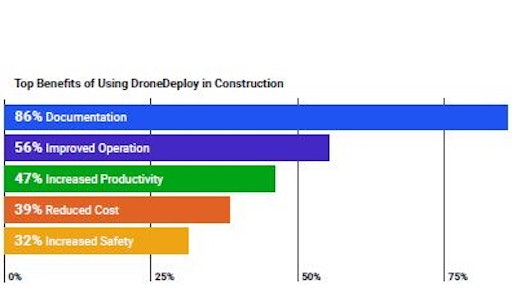 In a year of general-business cost cutting to combat the COVID-19 economy, 88% of respondents to a DroneDeploy survey say they plan to increase drone investment. DroneDeploy surveyed professionals in three key industries – agriculture, construction and energy.

The results are consistent with the drone-technology supplier’s same survey last year, suggesting that even with cutting general and administration costs amidst the pandemic, companies still want to invest in drone technology. Only 4% of respondents plan to cut their drone budget.

Fifty-seven percent of construction-industry respondents to the DroneDeploy State of the Drone Industry Report 2021 indicated they plan to expand their drone use beyond aerial maps in the coming year. DroneDeploy’s analysis says this suggest a certain maturity in drone programs, as well as growth in adoption.