DokaXact is an interactive sensor-based solution that enables the accurate positioning of wall formwork for vertical structures at a new level. The solution has been awarded the CTBUH 2021 Innovation Award of Excellence. 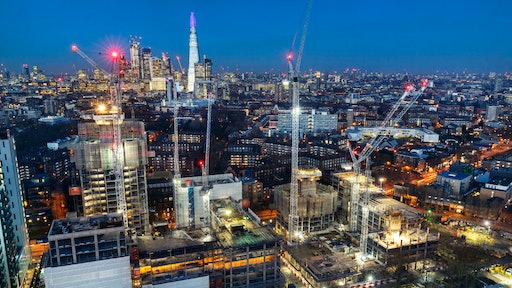 For the first time, DokaXact was used in the third phase of Lendlease's Elephant Park in Central London. It included a 25-story and 81 m high residential building.
Doka

One of the world-leading resources for pros focused on the inception, design, construction and ultimately the operation of tall buildings and future cities, the Council on Tall Buildings and Urban Habitat (CTBUH) holds an annual conference to look at the world's best innovations in tall buildings, urban spaces, building technology and construction methods. Known as the CTBUH Tall + Urban Innovation Conference, rewards these innovations in over 20 categories. DokaXact takes an established process and enables the construction companies to form concrete cores with a state-of-the-art technology.DokaDokaXact is an interactive sensor-based solution that enables the accurate positioning of wall formwork for vertical structures at a new level. It is a tool for surveyors and crews that allows site teams to quickly and precisely plumb and align wall formwork used with Doka climbing systems. The system was used first on Elephant Park in London and brought significant benefits, according to Wojciech Jawor, Surveyor, AJ Morrisroe & Sons Ltd. 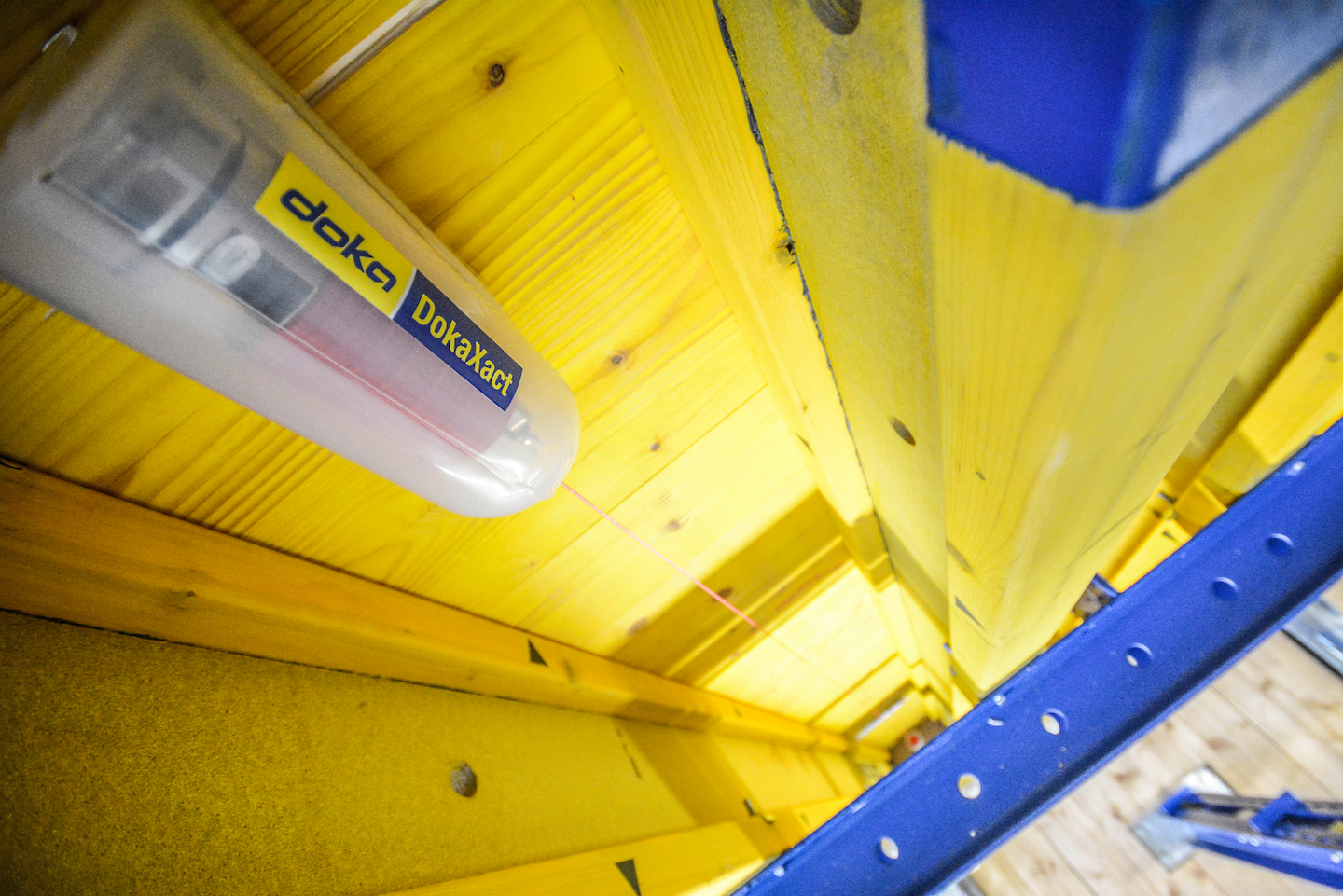 Multiple sensors attached to defined surveying points of the formwork measure redundantly the actual inclination of the formwork and communicate wirelessly with a centralised processing unit.DokaA surveyor was quoted in the official press release noting the time and flexibility it allowed.

"The DokaXact system supported me ideally in my daily work as a surveyor. I did not need to be present for aligning and plumbing the formwork elements. However, I was able to monitor the site progress from anywhere at any time.".

The expectations on the precision of built in-situ concrete structures continue to rise - for example, those for the installation of vertical transport systems or the connection of prefabricated concrete elements to the in-situ concrete core. DokaXact supports this with its high system accuracy of ± 2mm. The system consists of multiple sensors attached to defined surveying points of the wall formwork, which communicate wirelessly with a centralised processing unit.

DokaXact assists and speeds up the surveying process before pouring. The site crew can align the formwork prior to the final position check by app assistance with predefined routines. This reduces the amount of re-measurements by the surveyor and possible formwork adjustments that would be required. The overall forming time will be accelerated. 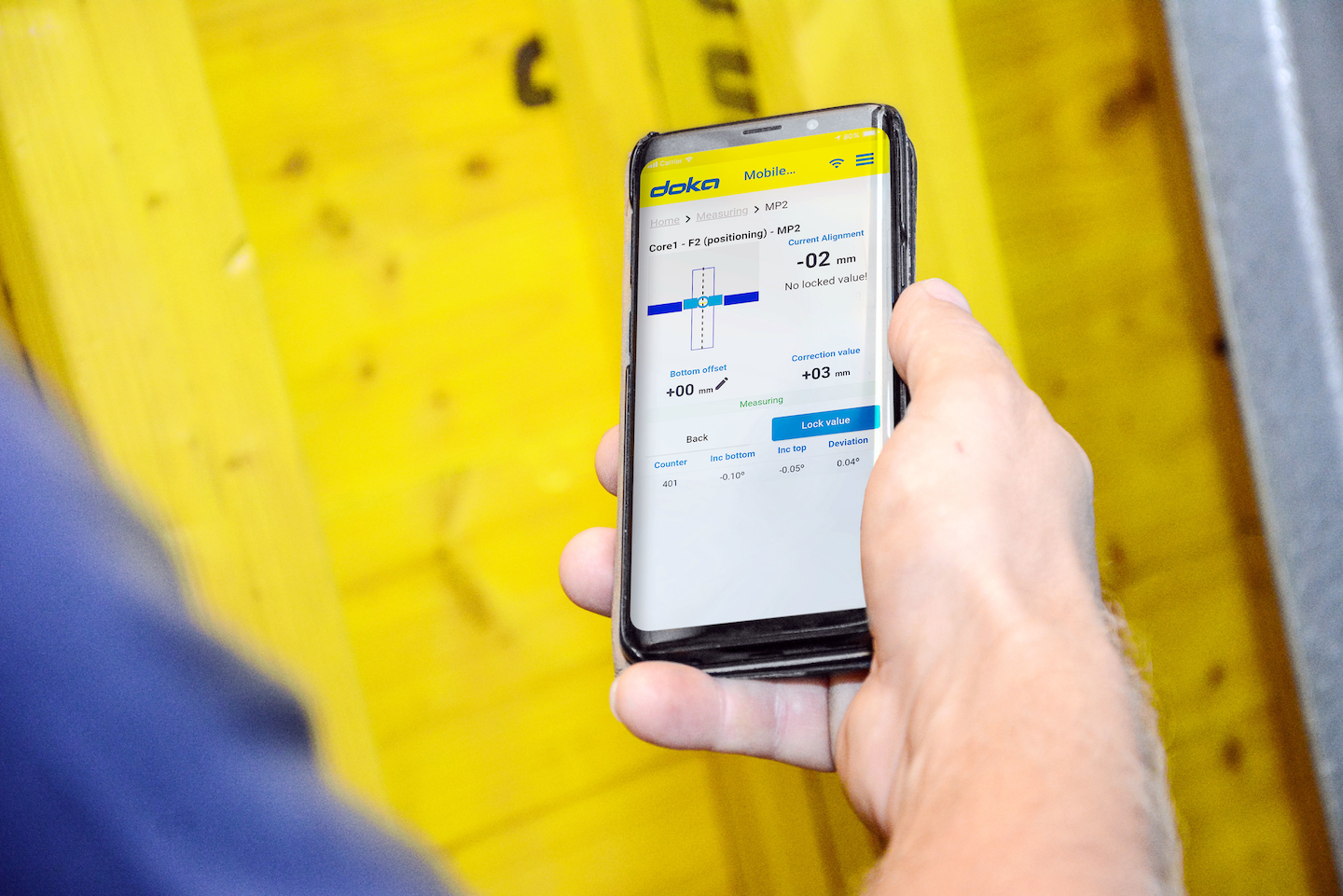 When using the DokaXact app, the formwork can be positioned and aligned for the next casting section with pin-point precision.Doka

DokaXact provides a quality assurance tool to built more accurately. With the live monitoring function, potential movements of the formwork can be made visible at all phases - from the positioning to the pouring process. Site managers are now able to observe their building tolerances 24/7 from anywhere, allowing preventative actions to be taken in order to avoid cost intensive reworks after pouring. 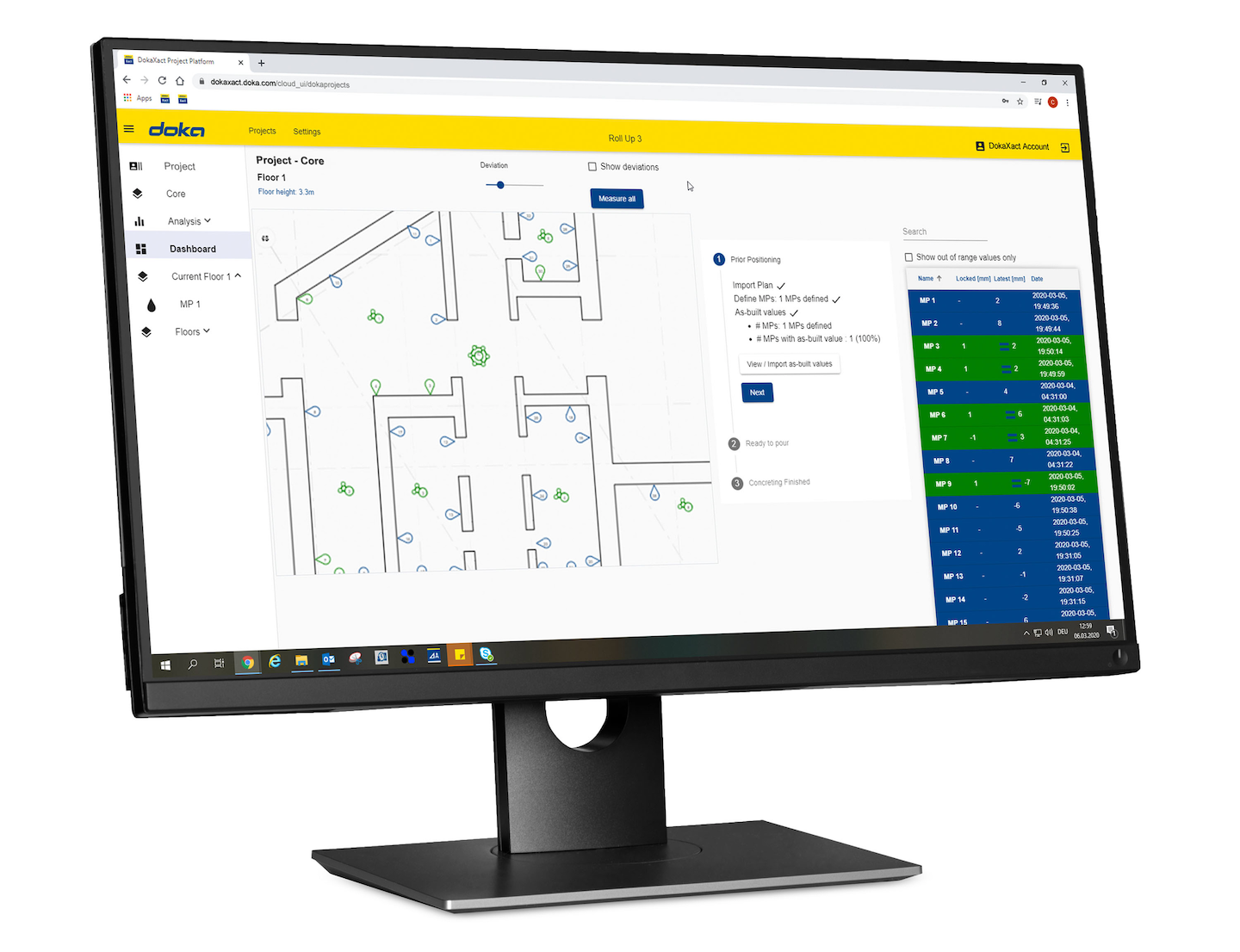 The web portal gives project stakeholders clarity regarding build progress and on-site performance.DokaThe DokaXact web portal makes available data for site managers and surveying engineers. This portal acts as the reporting, monitoring and analyzing platform to improve and optimize the routines and processes for the cycle to come. By creating efficient operations, increased productivity and higher quality of execution, the DokaXact system becomes a valuable tool for site crews, construction managers, and surveyors working on construction jobs.

"DokaXact can help build in-situ concrete high-rise cores, bridge piers and pylons more accurately in combination with faster forming times," says Dan Zvinca, Business Developer DokaXact. "The actual position of the formwork is known at all times of the working cycle – starting from the positioning of the formwork to installing the reinforcement, pouring and curing of concrete. DokaXact digitalises the positioning and monitoring of the entire wall formwork by transforming the traditional formwork survey method."