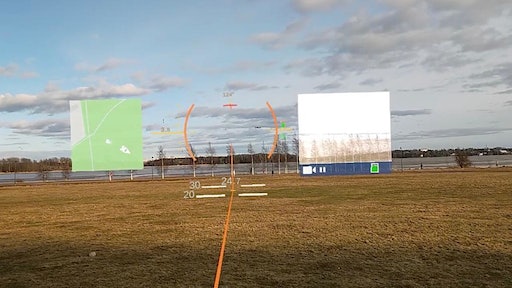 The software created by Anarky Labs through a collaboration with Flyby Guys, uses Microsoft HoloLens, allowing pilots to see telemetry data in the sky, rather than looking down at a screen.
FlyBy Guys

Anarky Labs recently received a patent for its artificial reality (AR) guided drone software, to be used by DJI drones, according to Drone Life. The software allows DJI drones, the most popular and most affordable drones on the market, to utilize Beyond Visual Line of Sight (BVLOS) capabilities.

Drones are becoming increasingly common on construction sites, as they can assist with site review, aerial surveying, mapping, measurements, monitoring and documenting. The unmanned aerial vehicles are also known for providing increased productivity, safety and security on construction job sites.

BVLOS technology is the next frontier when it comes to drone use on construction sites. Most drone flight is done within regular line-of-sight flying, limiting the use of drone technology. BVLOS is much more efficient, allowing for fewer takeoff and landing maneuvers and less human interaction.

The software created by Anarky Labs through a collaboration with Flyby Guys, uses Microsoft HoloLens, allowing pilots to see telemetry data in the sky, rather than looking down at a screen. The AR system enables more 3D situational awareness, according to FlyBy Guys. Watch the video:

Product launch is weeks away, according to FlyBy Guys. The AR tech includes way points and hazard detection. Height, distance and satellite count are visible when watching the drone in the sky. The video feed is also available on the HUD.

The software is supported by the following drone systems:

In January, the Federal Aviation Administration approved BVLOS drone operations without visual observers, so the technology and industry has been moving in that direction for some time. This latest technology from Anarky Labs is one of the first major steps toward BVLOS flight for DJI drones, the most commonly used drone on construction sites.