UPDATED 6/5/2020: The drop in construction spending was not as deep as expected but Wells Fargo Economics sees promising signals between the data’s lines, which could be supported by surprise job growth 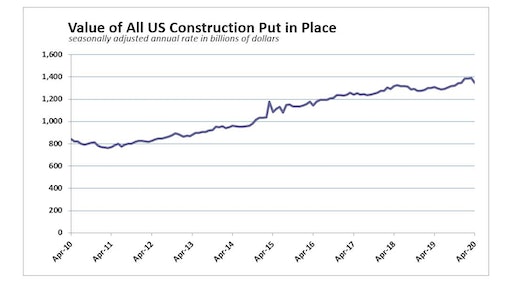 data: US Department of Commerce; graph: ForConstructionPros.comUPDATE 6/5/2020: The U.S. economy actually gained 2.5 million jobs in May and the unemployment rate that had been forecast to swell to near 20% actually fell to 13.3%, according to the Bureau of Labor Statistics. A pleasant surprise for the housing market and, potentially, follow-on construction activity.

Many economic indicators unsurprisingly registered record declines in April, but construction’s 2.9% contraction was not even the largest drop in construction spending over the past two years (outlays fell 3.2% in October 2018). What’s more, spending through the first four months of 2020 is still up 7.1% compared to 2019.

“That’s not to say construction was left unscathed by measures taken to contain the pandemic, and other indicators point to a more severe pullback in activity,” suggests Mark Vitner, senior economist with the Wells Fargo Economics Group. “Construction firms slashed payrolls by nearly one million jobs during April (-12.8%), which makes us think some downward revisions may be forthcoming. April’s better-than-anticipated report also likely reflects the inherent volatility of construction data.”

The Census Bureau estimates spending on “put-in-place,” meaning outlays are accounted for as they take place over the life of a project, which often take months or years.

Nearly every major subcategory of construction spending posted a decline in April. Residential construction tumbled 4.5%, as single-family and multifamily outlays fell 6.6% and 9.1%, respectively.

“While these are certainly drastic declines, we may start to see an improvement in single-family spending now that restrictions have been eased in many parts of the country,” according to Vitner’s analysis. “Demand for new homes has been incredibly resilient (new home sales rose 0.6% in April), which will likely give builders confidence to move forward with projects."

“On the other hand, we expect more prolonged weakness in multifamily spending. COVID-19 has thus far had an acute impact on dense urban areas where the bulk of new multifamily development takes place, which may keep rental demand depressed for quite some time. While properties are holding up well on an operational basis, a torrent of new supply is set to hit the market over the next 18 months.”

Conditions do suggest that single-family residential demand could rise soon, but it’s several steps removed from certainty. Reuters reports that the Institute for Supply Management (ISM) index of national factory activity rose to 43.1 last month from 41.5 in April (the lowest level since April 2009). A reading below 50 indicates contraction in manufacturing, which accounts for 11% of the U.S. economy, but April marked the first increase in the ISM index since January.

But the same Reuters report points out that about 21.4 million U.S. jobs were lost in March and April. The Labor Department is expected to report on Friday that at least another 8 million were lost in May, pushing the national unemployment rate to 19.7%, according to a Reuters survey of economists. That would be up from 14.7% in April, and the highest since the government started tracking the series in 1948.

With the exception of manufacturing (+0.3%), conservation and development (+1.7%), and sewage and waste disposal (+1.6%), every major category declined. Office spending declined 0.7%, but will likely slow further in coming months, as companies grapple with social distancing guidelines and allow for an extended period of remote working.

Similarly, lodging outlays slipped 0.3%, but will likely remain weak for the foreseeable future. Even as tourism picks up this summer, international and business travel will continue to be well off normal levels.

Public expenditures fell 2.5%, mostly a result of a 5.2% pullback in the highway & street category. 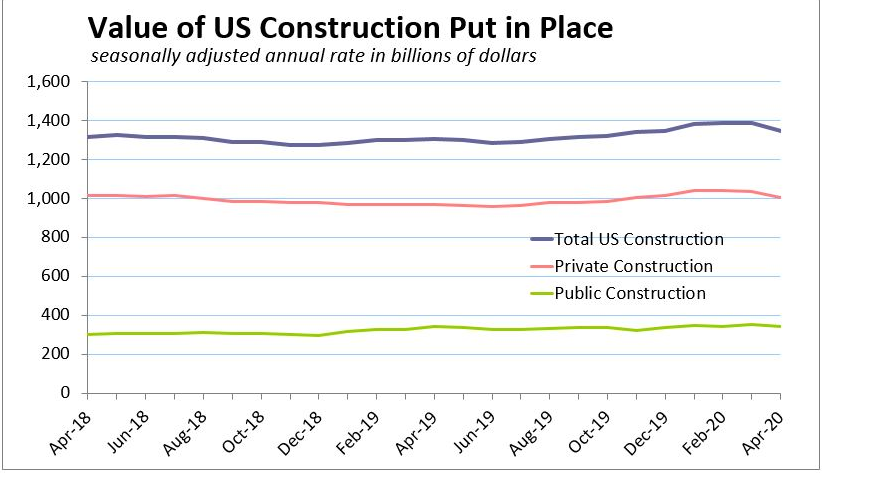 After slowing during Q2 2020 as the pandemic took hold, homebuilding demand picked up during Q3 and will remain robust, says Moody's.
December 7, 2020

As the US economy struggles to maintain traction, planning for nonresidential building projects has slowed.
Dodge Data & Analytics
December 7, 2020

Total value of construction put in place for the month rises on continued residential strength, but the near-term outlook is clouded by persistent pandemic questions
Larry Stewart
December 2, 2020
Economics

The total value of construction put in place edged up for a fourth month of U.S. construction expansions carried by residential expansion
Larry Stewart
November 2, 2020