technology has evolved with the development of modern tanks that are designed to safely handle fuel while complying with strict environmental regulations commonplace on today's jobsites. 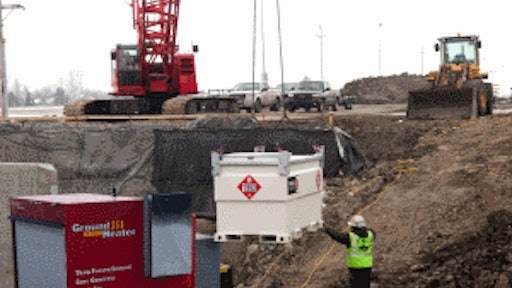 When hearing the term "fuel tank," it's common to think of an old, round, rusty reservoir with streaks of oil running down the sides - not exactly the picture of environmental friendliness. Fortunately for contractors, fuel suppliers, power rental operators and others who need to store and transport diesel, technology has evolved with the development of modern tanks that are designed to safely handle fuel while complying with strict environmental regulations commonplace on today's jobsites.

The name of the game is containment ... and having equipment that will keep fuel inside the tank to avoid ground contamination. One company specializing in fuel containment is Transcube, a manufacturer of double-walled tanks. Transcube's design features an outer wall that provides 110-percent secondary containment of an inner tank's total capacity. Where traditional tanks generally require the use of a separate containment pan, Transcube tanks have all fill ports, pumps, fittings and connections housed within the secondary containment area.

The containment capabilities extend beyond environmental compliance to transportability advantages as well. The tanks are DOT approved for road transportation and UL 142 certified for safe diesel fuel storage. Internal baffles within the tank prevent the surge of fuel during transport, and the tanks can be lifted, raised or lowered by a forklift or crane while full of fuel.

Traditional, round diesel storage tanks are not designed to be moved while full. But many contractors will fabricate their own modifications to these tanks so they can be hoisted by crane. Such was the case with several tanks at New York City's World Trade Center (WTC) Memorial jobsite.

In October 2008, possibly due to inadequately spaced eye hooks, a modified tank on the site was unable to contain a fuel surge as it was being lowered into an 85-foot-deep hole, causing a significant amount of diesel fuel to be spilled. The incident immediately brought serious environmental and safety concerns to light for contractors on the job.

"They needed a tank that was legally certified to be lifted with fuel inside," said Hank Berberat, owner of Watertown, Connecticut-based fuel storage supplier Berco Tank. "Some companies decided to use our Transcube tanks even though they aren't moving fuel. They're taking a proactive approach to avoid issues with inspectors down the road. There are 10 different companies using 16 Transcube tanks at the site."

Contractors have seen the units prevent incidental messes associated with fuel tank use. "Handling fuels is messy when you're taking hoses off and such," said Berberat. "With Transcube everything is contained within the cabinet so you've got a much cleaner situation." Most of Berco's Transcube units are expected to remain on duty for the duration of the WTC Memorial project, slated for completion by 2013.

Another company that's realized the benefits of Transcube is AmeriTemp, a portable climate control and power rental business in Johnsburg, Illinois. AmeriTemp supplies to construction contractors, industrial and manufacturing facilities, and event organizers. Over the years, the company has seen customers encounter applications requiring larger heaters and generators.

"With big heating jobs especially, equipment must run continuously," said AmeriTemp president Al Favia. "It's inconvenient for the customer to constantly have fuel delivered to a site. Having heaters and generators hooked directly to a fuel tank makes much more sense."

AmeriTemp purchased its first Transcube tanks in 2007 and now has three 264-gallon Transcube tanks and another three 528-gallon units in its fleet. "With the fuel company tanks we used to deal with, we had to place pipes to draw diesel from the bottom of the tank, then manipulate how fuel was going to be transferred, and finally rig up some fittings that would work. The Transcube has simple quick-connect fittings - just plug in a fuel hose and it's ready to go."

According to Favia, the secondary containment design gives his customers the versatility to place tanks wherever needed on a project, rather than having to locate them in specially designated fuel containment areas that are common on construction sites. "The fire department or an inspector might drop by to check on a fuel tank setup and ensure it's contained," added Favia. "Transcube has extensive, built-in secondary containment. That really gives the customer peace of mind."

Flexibility and versatility have been key aspects of AmeriTemp's experience with Transcube, particularly when working with customers who have multiple heaters or generators to fuel, or for those who are fueling that type of equipment while also requiring a fuel pump to fill up vehicles.

"You can run multiple lines from the Transcube," said Favia. "One customer operates a large tractor shed where they maintain vehicles. We've had oil-fired heaters on rental for more than a decade, but a year ago we sent one of our 528-gallon Transcubes and it's been there since. The tank is set up where a heater is running off a quick connect, and we also have a transfer pump in there. They can fill up any equipment they want and keep the heater going simultaneously."

Favia noted that tank and equipment setup takes about 10 to 15 minutes, compared to a four-hour process with some traditional style tanks - a significant difference for productivity-conscious clients. The tanks also give AmeriTemp the flexibility to shop around for better fuel prices, or to use a certain supplier of his customer's choosing, without worrying about the potential hassles of a tank coming along with the fuel.

"Our customers are more satisfied," said Favia. "The tanks are easier to use and are so much cleaner than anything else out there."