A review of the 2005 NPE Show in Atlanta 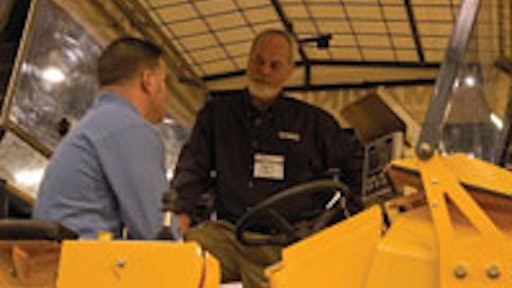 About 2,200 attendees packed the aisles at the Cobb Galleria Centre in Atlanta, GA, for the 20th anniversary of National Pavement Expo. Upon entering the exhibit hall, show goers' eyes were drawn toward the towering Marini MP 1300 cold planer milling machine at the Bomag Americas booth.

"This was the first time in years contractors were able to see a milling machine on the floor, and it attracted the attention you would expect from paving contractors," said Loretta Miles, show manager. "At our annual Advisory Board lunch the milling machine was a hot topic, and board members said they expected even larger equipment on the floor next year."

Attendees also got a great look at hundreds of other pieces of equipment from all areas of pavement maintenance and reconstruction during two and a half days of exhibits. Miles said increased attendance and strong sales on the show floor helped make the 20th anniversary National Pavement Expo a success.

Many companies chose NPE to introduce updates and new equipment at the show.

Equipt Mfg. debuted several updates and additions to its sealcoating machines that emphasize the company's "push on safety." In addition to former safety offerings, Equipt machines are now available with safety strobes, a back-up alarm, safety cones and holder, and a water jug. The control panels were also relocated to the curb side of the machine to keep operators out of the street.

Billy Goat Industries had on hand its recently introduced QB1601 walk-behind blower, available in self-propelled or push models. Just like the smaller horsepower blowers in the Quiet Blower series, this 16-hp model features a nylon fan for quiet operation.

At the Elgin Sweeper Company booth, attendees could take a walk around the Waterless Eagle, Elgin's waterless sweeping system that creates a nearly dust-free environment. Dry sweeping, a new concept many people are still unfamiliar with, has many advantages, including waterless dust suppression, the ability to sweep in freezing weather, and increased environmental benefits.

Deutz Corp. recently introduced two new engines that fill out the bottom of its water-cooled diesel line — the 2008 and 2009 series, with power options from 15 hp to 67 hp.

New to the show

Minuteman Parker showcased its Parker line of wheeled blowers, while Heavyquip had its line of drag shoes for street sweepers, pavers, snow blowers on hand at its booth.