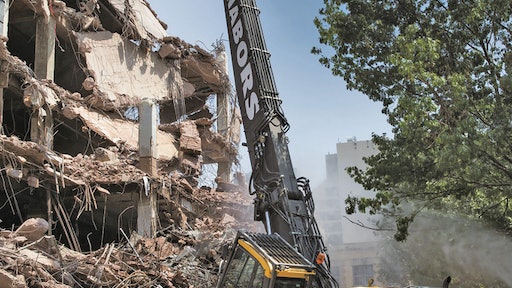 During the later stages of the project, crews worked up to 10 hours a day seven days a week, with the high reach doing 99 percent of the tear down work and a Volvo EC380D and EC360C with grapples partnering to separate and scoop debris into hauler trucks.

After more than 50 years being blocked from view by the sterile limestone Civil Courts Building, the historic 1895-era Tarrant County, Texas, Courthouse has gotten some breathing room, thanks in large part to the work of National Demolition Associaiton member Lloyd D. Nabors Demolition, Hutchins, Texas.

The Courthouse was built on the bluff of the Trinity River, made of pink granite cut from local stone repositories. Unfortunately, it was eclipsed in the 1950s by the courts building, described by local media as “its ugly cousin,” which was finally demolished.

Lloyd D. Nabors employed a Volvo EC460CHR ultra high reach excavator to demolish the five-story structure. The machine is capable of reaching heights nearing 90 feet with a forward reach of up to 54.6 feet as its shear claw surgically selects and snips steel and limestone columns into manageable pieces of debris.

Among the project’s challenges was the fact that the courthouse sits adjacent to the courts building just 15 feet away. Compounding the difficulty were the bump-outs extending 20 feet from the building, which made it nearly impossible to move large equipment on site. Early demolition began by hand. The five-story bump-out was dismantled from top down using mini excavators hoisted onto the roof, using genuine manpower.

At that point, Lloyd D. Nabors gained an extra 20 feet of width to bring in the Volvo high reach excavator. A job that would in more typical conditions take 45 days stretched to 90 due to the delicate nature of the demolition, according to the company.

When determining which equipment to bring to the job, owner Lloyd Nabors knew the Volvo EC460CHR that he had added to his fleet just six months earlier would be the workhorse excavator. Powered by a Volvo 329-hp engine, the 60-ton machine combines high torque at low rpms with high flow hydraulics to bring the 80,000-square-foot structure cleanly and safely to the ground with no impact on the neighboring historic buildings or daily government business.

“With the long reach boom fully extended, the stability of the EC460CHR is bar none. And when you are working at these heights with a LaBounty UP25 6,000-pound shear at the end of your boom, beating against a building, you need to feel stable,” said Jarred Walker with ROMCO Equipment Company, the Volvo Construction Equipment dealer for northern Texas. The Volvo high reach excavator line has the capacity to handle attachments from 5,500 to 7,720 pounds, including grapples, shears, pulverizers and hammers.

Maneuvering the excavator into position was eased by the hydraulically retractable undercarriage, which can expand from 7 feet 10 inches to 11 feet 1 inch. to simplify transport and increase stability and production when working. An additional 8,370-pound. counterweight anchors the excavator to allow a wide operating range without diminishing control, power or stability.

During the later stages of the project, crews worked up to 10 hours a day seven days a week, with the high reach doing 99 percent of the tear down work and a Volvo EC380D and EC360C with grapples partnering to separate and scoop debris into hauler trucks.

In the demolition field, safety stays top of mind. In the heart of Fort Worth business district, that means no risk to neighboring historic structures and minimizing impact on daily governmental business.

Scaffolding with netting was draped over the Courthouse and plywood nailed to the windows facing the southwest side to protect from overflying small debris. On weekends the teardown kicks into aggressive mode with the framing streets blocked to traffic and pedestrians.

To minimize dust, a supersize DustBoss oscillating fan, mounted onto a truck and attached to a 1.5-inch fire hose, shoots water four to five stories into the air, dampening the powderized concrete that hangs in the air.

Lloyd D. Nabors Demolition is a green certified demolition company, committed to maximizing the amount of demolition materials that are recycled. All concrete from this site is going to a local recycler where it is turned into road base. The rebar and steel columns are also recycled.