While new machines forms are rare in the construction equipment market, there are a few products that revolutionized the market. 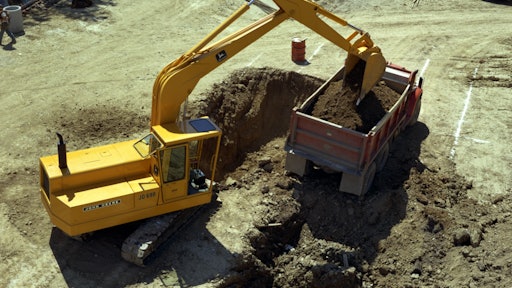 Totally new machine forms are rare in construction equipment. “With most of the machines you see today, the basic idea of the machine has not evolved,” says Tom Berry, archivist, Historical Construction Equipment Association. “The technology and the power applied to that machine idea have evolved. A horse-drawn pull grader drags a blade across the surface to produce a smooth surface.” Today’s motor graders incorporate variable horsepower and utilize precision hydraulics with laser and GPS guidance systems to produce extremely accurate surfaces.

Equipment merely tends to evolve over time. (See 50 Years of Construction Equipment History: Interactive Timeline) “We have an industry where frankly it tends to be more gradual changes,” says Brian Rauch, senior vice president of engineering, manufacturing and supply management, Deere & Company. “That is because our customers are very cautious and expect a very quick payback for their investment.”

But there are a few products that revolutionized the industry. In the 1960s, the hydraulic excavator emerged. “Hydraulic excavators eventually made the cable in construction applications obsolete,” says Berry. “They began in the ’50s and really started taking hold in the ’60s.”

Tractor-loader-backhoes are another one of the major machine form innovations of the past 50 years. Although they were around in the ’50s, their use didn’t take hold until the following decade. “When they became popular in the ’60s and ’70s, they superseded a lot of other types of machines,” says Keith Haddock, national director of the Historical Construction Equipment Association and author of several books on the history of construction equipment. “We saw less of the crawler-mounted loader. The tractor-mounted backhoe was simply taking on more of the job. It offered mobility. It could be driven down the highway without using a trailer.”

“The backhoe-loader was a milestone machine,” says John Patterson, former CEO and president of JCB who rose through the ranks from a field engineer. “It became the ‘Swiss Army Knife’. It was a very popular machine, and still is. I think we could re-educate the marketplace as to the benefits of the backhoe-loader vs. some other products.”

“The backhoe was popular because there really wasn’t much of an option out there,” says Katie Pullen, Case Construction Equipment. Before the purpose-built backhoe, there were attachments for tractors. “They were not really made to do the type of work that needed to be done. When you started seeing a lot of the road building taking off and a lot of construction booming, there was definitely a need for it.” When other product lines were down, the backhoes remained a growing segment.

A similar thing could be said about the articulated dump truck, which traces its roots back to the ’60s. When first introduced, these vehicles were ahead of their time.

“Customers were happy using modified highway trucks and side dumpers,” says Haddock. “It wasn’t until the ’70s that [articulated dump trucks] became popular because they were found to operate in more difficult conditions. You didn’t need sophisticated haul roads. And they were cheaper in many cases to use with an excavator than using self-powered scrapers.”

The successful pairing of the hydraulic excavator with the articulated dump truck really signaled the demise of the motor scraper in many jobsite applications.

During this same time frame, there were some notable upgrades to existing machines. While not necessarily a new machine form, the use of articulated steering for wheel loaders really took off in the ’60s, according to Berry.

“An evolution of equipment over the last 30 or 40 years that has been quite significant has been the introduction of compact equipment,” says Patterson. “If you look at the origins of that product, it was in Europe and Japan, countries where the infrastructure was pretty well developed. There was a need for compact equipment to work in city environments. The United States, on the other hand, had vast areas of geography. Streets and roads are wider. So there really wasn’t demand in North America.”

But over time, that changed. Compact machines such as mini-excavators appeared in the late ’80s. “It was the cost of manpower that caused contractors to look at mechanization wherever possible,” says Haddock. “Today, nobody thinks of taking a hand shovel out and doing a job. It is more efficient to use a machine, even if it is a small one.”

These machines also provided ease of transport where they could be put on a trailer and hauled behind a pickup.

In 2009, John Deere pulled the wraps off another unique machine form when it introduced the high-speed dozer. “The high-speed dozer is a machine that was designed to work in areas where speed and fine grading were valuable,” says Rauch. At the time of its introduction, major work on housing subdivisions ground to a halt. With that market starting to rebound, time will tell how the high-speed dozer concept will be accepted.