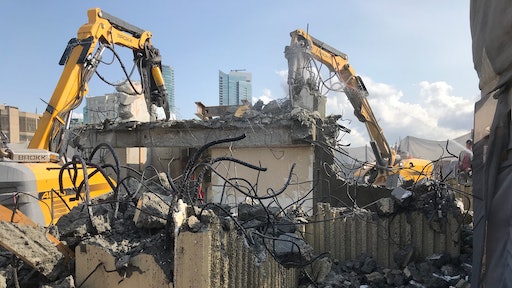 JMX’s highly engineered demolition plan leveraged the quiet operation of the Brokk machines and Darda CC700 attachments, crushing the concrete rather than breaking it with hammers.
National Demolition Association

For more than 40 years, Vancouver’s Empire Landmark Hotel held the title of the city’s largest free-standing hotel. Living up to its name, the structure, capped by the iconic Cloud 9 restaurant, defined Vancouver’s skyline. However, it’s inevitable that what goes up must come down, and when developers set their sights on revitalizing downtown Vancouver’s bustling West End, it was clear the landmark’s time had come. 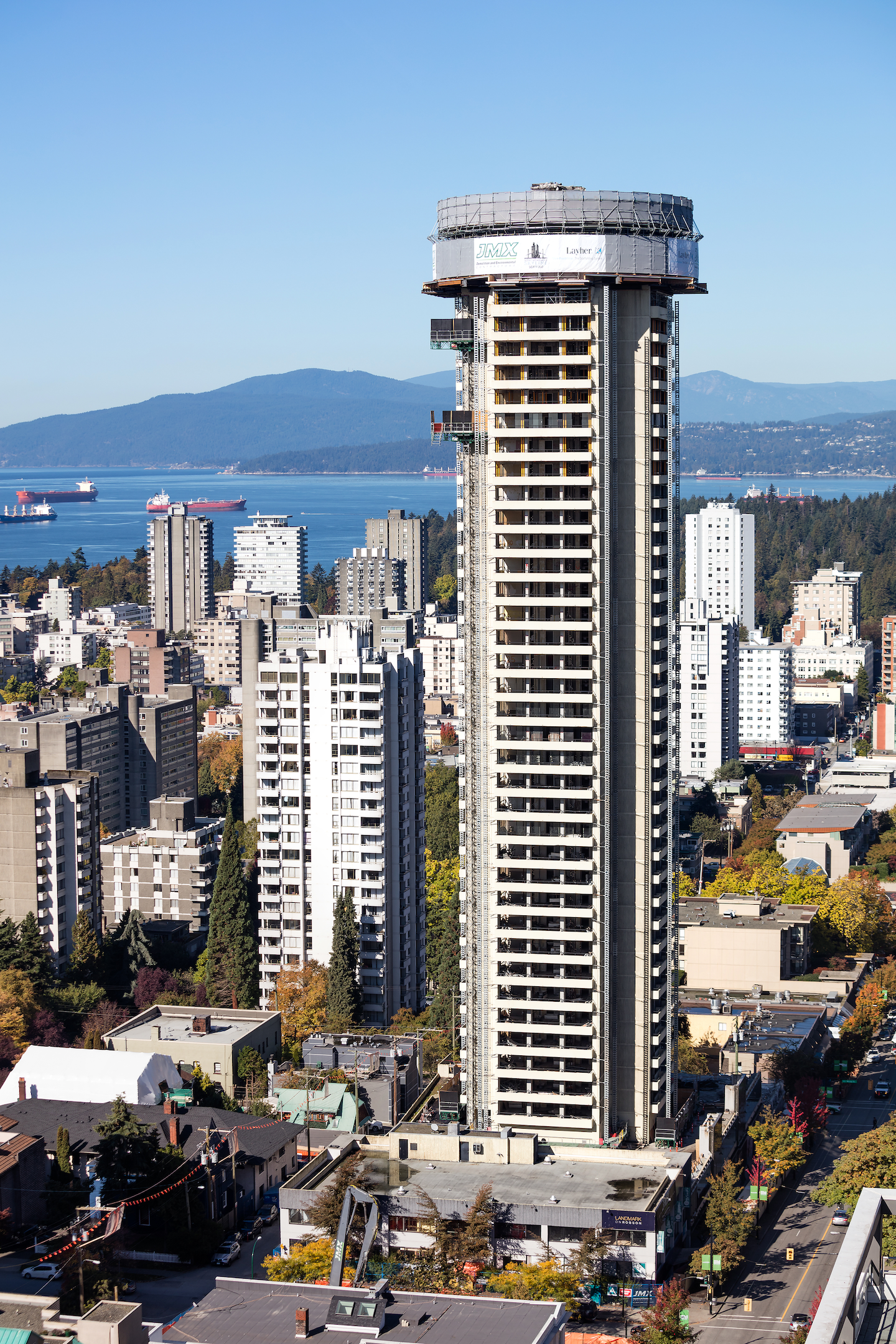 The Empire Landmark Hotel opened in 1973 as the Sheraton Landmark. At the top, Cloud 9, a revolving restaurant, served guests an array of fine dining options paired with breathtaking panoramic views of the city and Vancouver Harbour. Towering 420 feet over Robson Street — extending a further three levels underground — and occupying an entire city block, the hotel and restaurant quickly became a popular destination for tourists and locals alike — host to countless celebrations and events.

Despite its place in Vancouver’s cultural heart, the Landmark hosted its last guests in September 2017. Extensive retrofitting costs and growing demand for residential space in the densely populated neighborhood convinced building owners to demolish the building and replace it with a pair of towers featuring luxury condos, retail and office spaces.

The complex project required a company with multistory demolition experience and forward-thinking ideas — a company like JMX. With 20 years of experience and more than 250 employees throughout Canada, JMX fosters a culture of innovative engineering solutions and highly regulated demolition practices that focus on safety and eliminating environmental impacts.

Relying on this experience, JMX and its engineers prepared to tackle the challenges presented by this monumental project. In addition to the building’s size and the massive amounts of debris demolition would create, they needed solutions to address the high-traffic location and potential for substantial safety risks.

“The Landmark demolition presented us with an inherently complex and challenging job,” says Shane Macpherson, director of business and projects for JMX West. “In addition to the usual risks associated with standard high-rise demolition, we were presented with the unique round restaurant structure atop the tower. We also had to ensure zero risk to the large volume of vehicles [and] pedestrian traffic going about their daily lives 420 feet immediately below us.”

JMX’s primary focus was mitigating disruption to the local area with the dust and noise that accompanies any demolition project, which led the company to look to robotic demolition. Previously, JMX used this “silent demolition” method with great success, taking down a 24-story building in Calgary using two Brokk 400D remote-controlled demolition machines with Darda CC700 concrete crushers and SB552 hammers.

“People have this idea, when they hear a building is being demolished, that it’s going to be this big explosion,” Macpherson says. “Demolition is inherently loud and dusty in their minds. And, historically, they’re right. But with creative engineering and today’s technology, it doesn’t have to be. We developed a plan that virtually eliminated dust and only registered 85 decibels inside the demolition zone and 70 decibels outside the hoarding. That’s six decibels quieter than ambient street traffic.”

After assessing the challenges of the Landmark demolition project, JMX partnered with Brokk’s Washington state-based service fleet to help them determine the right equipment for the job. JMX commissioned two Brokk 400 diesel machines with CC700 crushers and SB552 hammers to work in conjunction with a Brokk 160 electric unit and a CC420 crusher they already owned.

In addition to reducing noise, the Brokk machines’ power-to-weight ratio addressed the building’s robust construction and floor load limits. The 6-ton Brokk 400D offered hitting power on par with a 9- to 12-ton excavator in a compact 5-foot by 14-foot footprint. It also provided versatility — handling the 1,400-foot-pound energy class SB552 or the CC700 attachment with 278,000 foot-pounds of crushing force — allowing JMX to limit the need for additional equipment on the demolition floor.

“There are many ways to take down a building,” Macpherson says. “Using tower cranes and cutting the building apart is still the traditional method. However, it is costly and presents a whole host of additional risks and challenges. To minimize the risk and the impact on the community, we felt top-down robotic demolition was the right choice and Brokk was the right partner. From equipment needs to troubleshooting, their team provided support throughout the entire process.”

Phase one of the demolition started in November 2017 with JMX crews stripping the entire building to bare concrete. Due to the building’s age, it contained significant amounts of asbestos. JMX crews installed and worked inside negative air containments with protective breathing equipment and specialized personal protective equipment to prevent migration of hazardous materials. 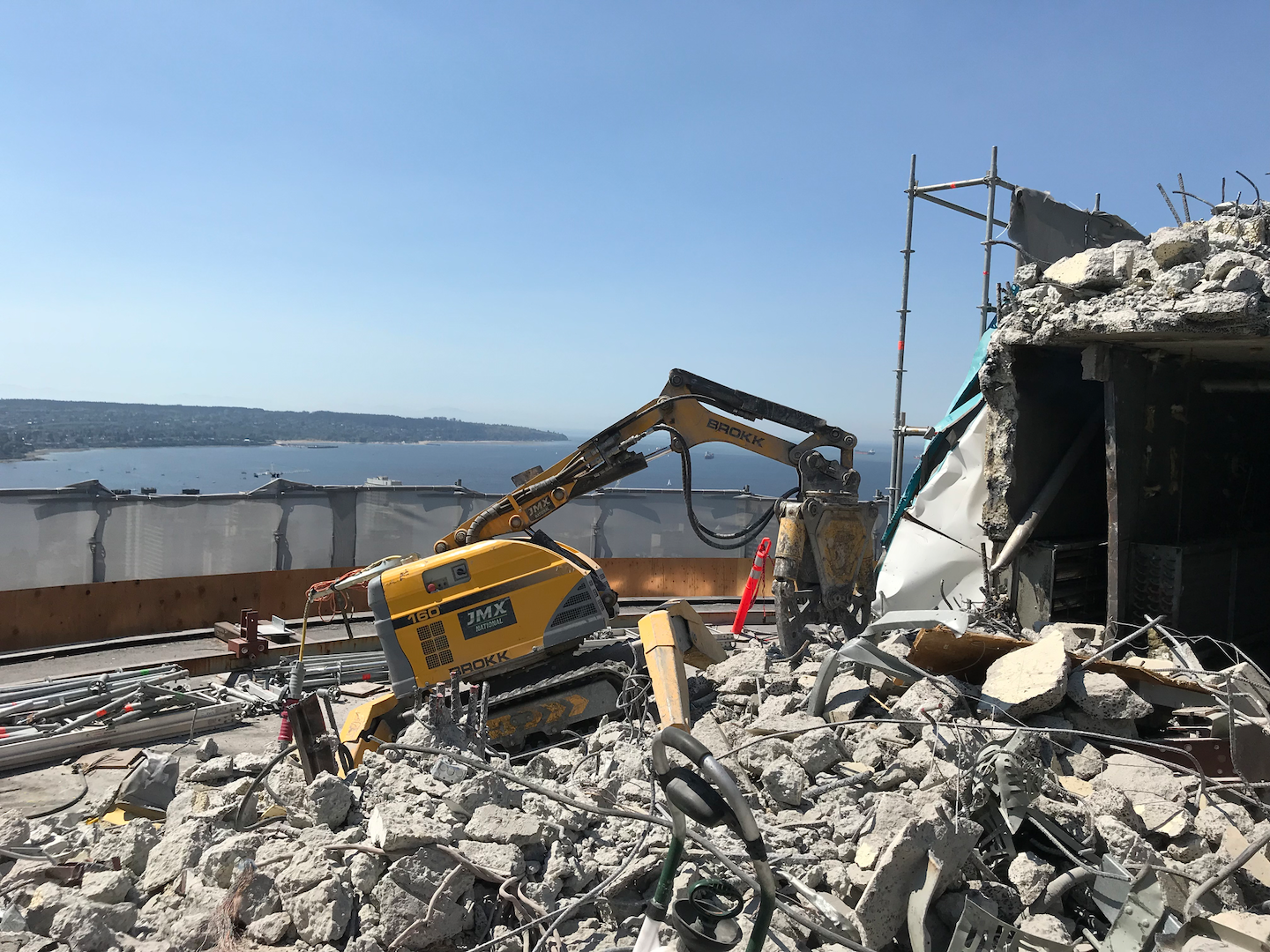 Systematically crushing concrete and cutting reinforcement steel, the Brokk operators directed the remote-controlled machines to work their way through the gutted tower of the Empire Landmark Hotel, taking advantage of the Brokk robots’ extended range of motion.National Demolition Association

During this phase, 1.26 million pounds of hazardous materials were removed from the site as well as 800 tons of wood, steel and other materials.

As work progressed inside the building, JMX installed mast climbers around the perimeter of the Landmark’s concrete tower. These served as transportation to move personnel, materials, the three Brokk machines, two material handling skid steers and other supplementary equipment to the top of the building.

Once the equipment was moved, JMX converted the mast climbers into a hoarding system that safely enclosed the entire work area to trap dust, debris and noise, preventing material escaping the demolition area.

JMX’s plan leveraged the quiet operation of the Brokk machines and CC700 attachments, crushing the concrete rather than breaking it with hammers. Crews then dropped the concrete down the decommissioned elevator shaft. Misters installed at various points in the elevator shaft dampened concrete debris on its way down, minimizing dust at lobby level.

From there, the material was collected and transported to a staging area for further crushing before being recycled.

“From the start, noise was one of our biggest concerns with this project,” Macpherson says. “But with the Brokk machines and crushing attachments, the actual demolition was incredibly quiet. You could be standing on the demolition floor, next to the operator, having a normal conversation.

Now, with initial preparations in place, JMX faced the most challenging aspect of the Landmark demolition. Extending out 12 feet from the tower, on the top of the building, loomed the two-story Cloud 9 restaurant.

Before the Cloud 9 demolition could begin, JMX engineered crash decks to support the restaurant’s floor and roof. Using the mast climbers, crews moved 160,000 pounds of engineered steel and an additional 30,000 pounds of scaffolding materials to the 41st floor to install these structures, which also included a double layer of plywood and net hoarding to contain material, dust and water.

Once crews installed and engineers thoroughly inspected the scaffolding and crash decks, demolition finally began — from the top down. Systematically crushing concrete and cutting reinforcement steel, the Brokk operators directed the remote-controlled machines to work their way through the restaurant. Standing 18 feet away, safe from debris and dust, operators were able to use the Brokk robots’ extended range of motion — reaching 22 feet vertically and 24 feet horizontally — to crush concrete slabs, beams, walls and columns safely and efficiently.

With the hoarding in place, the demolition area was essentially hidden from the ground and neighboring buildings. Curious residents, unable to see or hear what was going on, questioned if the project was actually progressing until the protective hoarding structures were removed and Cloud 9 had disappeared.

After the Cloud 9 restaurant was removed, the project picked up steam. The Brokk machines continued the demolition, completing one floor every three to four days. With each new floor, the mast climbers were lowered and tied into the tower to continue the demolition process. The Brokk machines and skid steers moved down the stairwell using a specially engineered ramp.

JMX installed five floors of shores under the active demo floor — 160 shores per floor — to carry the load, ensuring the stability and safety of the building during demolition.

Using this demolition method, JMX removed 38 stories of the Empire Landmark’s tower in just nine months. Crews used a high-reach excavator with a large concrete pulverizer attachment and three support excavators with specialized material processing attachments to remove the remaining two floors and other parts of the building — including multistory podiums on either side of the tower, the tower core and three levels of the below-grade parking structure — the last traces of Vancouver’s Landmark.

In addition to the preventive measures engineered into the demolition plan, JMX held daily safety meetings and employed three safety specialists to oversee every minute of operation to ensure the Empire Landmark demolition was one of the safest high-rise demolitions in Canadian history.

“From day one, safety was our number one priority,” Macpherson says. “We knew the Brokk method offered a safe solution for an inherently dangerous activity. Brokk machines kept our workers and the public safe.”

As part of the demolition activities, JMX crushed 40,000 tons of concrete to recycle as road base.

With demolition complete, the project moves into the construction phase. The new towers will fall 100 feet short of the Landmark’s height but promise a much better use of space on the bustling Robson Street. Construction is expected to be complete in 2023.

While the Empire Landmark demolition currently holds the title for Canada’s largest building deconstruction, it is only a matter of time before the mantle passes to another demolition project. JMX Contracting plans to be at the helm of whatever that next project may be, using the latest innovative demolition methods.

Arielle Windham is a writer for the construction and demolition industry.