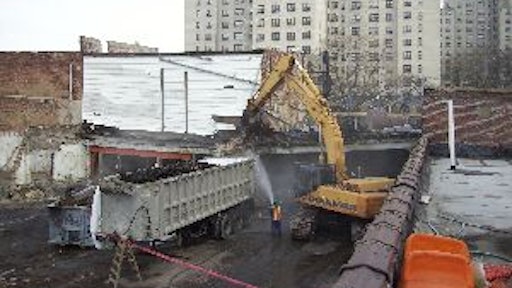 R. Baker & Son All Industrial Services, a specialized dismantling, rigging and demolition contractor, completed a very technical selective demolition project for Con Edison in Brooklyn, New York. Con Edison purchased the property for a future substation installation and required the demolition of the buildings on the lot.

The lot consisted of several buildings on a 225 ft x 200 ft parcel in a combination residential and commercial area near downtown Brooklyn, NY. The buildings were mostly constructed of masonry and brick walls with wooden floors and structural members. The lot was bounded on three sides by active sidewalks and a shared common wall with an occupied building on the East side. Several of the multi-story buildings had structural problems including unsafe roofs, cracked structural beams and walls that bowed outward. In addition, a hotel bounded the southeast portion of the lot which utilized the alleyway for guest parking.

Numerous tasks needed to be completed to make sure the buildings were safe to demolish as well as to protect the surrounding public and active structures. A detailed Health and Safety Plan, Work Plan and signed engineering drawings were developed to detail safe work practices and specific methodologies to complete the project. A sidewalk bridge with scaffolding and netting and a wooden fence was placed around the entire lot. Several floors of the interior of the buildings needed to be shored to prevent uncontrolled collapse. Utility disconnects and isolations were coordinated and verified. Several fuel storage tanks and associated piping were pumped and cleaned of product which was sent offsite for recycling.

All necessary permits were obtained including hot work, demolition, asbestos removal, sidewalk closing and crossing. As an additional safety measure and to ensure public safety, security was maintained 24 hrs a day.

Before demolition activities could be conducted, the structures needed to be abated of asbestos containing materials (ACM). ACM consisted of roofing materials, piping insulation, boiler insulation and gaskets. The insulation and gasket materials were abated using standard asbestos removal procedures. Due to the structural instability of the roofs, a variance was obtained to abate the ACM roofs using mechanical means and wet methodology. An asbestos trained operator in a Case 9060B excavator with grapple carefully removed the roofs, while trained laborers performed dust suppression, and placed the ACM directly into lined rolloffs.

In order for the buildings to be safely demolished, several wall bracing systems needed to be installed. The wall bracing and shoring design was performed by a licensed professional engineer, which was submitted for NYC Building Department approvals. Upon approval, steel bracing was installed along the shared common wall, which needed to remain in an undamaged condition, as well as along the northern basement wall.

Safety for workers and the surrounding public was first and foremost throughout the entire project. The dedicated Site Safety Officer, Mr. Henry Walburger, conducted daily safety meetings and made sure that proper safety procedures were always followed. Workers not only wore standard Level D PPE but also put on high visibility safety vests. Mr Walburger also made sure that dust suppression was maintained and that spotters were utilized along the perimeter to ensure public safety.

Once the buildings were hand demolished to a safe height and the necessary separations had taken place, mechanical demolition commenced. Two Case 9060B excavators with grapples were utilized to perform the demolition of the buildings to top of slab. These excavators along with a Doosan DX300-LC with a 5,000lb hammer attachment were utilized to demolish the concrete slabs.

To ensure the buildings were safely demolished, R. Baker & Son assigned two of their key operators/managers to the project. Mark Baker and Mike Masucci, both with 20+ years of experience, worked in tandem to carefully dismantle the structures.

R. Baker & Son's commitment to recycling and philosophy of being "green" was implemented throughout the demolition operations. Metals, concrete and brick were sent offsite for recycling. Wood timbers, consisting of yellow pine and Douglass fir, were salvaged and sent to a mill for reuse as architectural wooden beams and hardwood flooring.

Once demolition was completed, restoration activities were then implemented. The site was backfilled with clean fill and then topped off with several inches of clean stone. A perimeter chain link fence and access gates were installed. The sidewalks were repaired and restored.

Due to the team of Con Edison and R. Baker & Son's attention to pre-planning, safety implementation and work execution, the project was successfully completed without any incidents or accidents.


R. Baker & Son All Industrial Services is the premier specialized contractor for dismantlement, decommissioning and demolition in the United States, Canada and Puerto Rico. The veteran-owned company has been in business since 1935, has over 100 employees, an exemplary safety record (We have been directly involved in four (4) sites that received VPP OSHA Safety Awards) and is financially strong (bonding capabilities over $10 Million). Capabilities include total plant and facility dismantlement, decommissioning, demolition, plant relocations and re-installations as well as heavy equipment rigging and machinery moving, millwright services and onsite concrete crushing.

With John Deere SmartGrade™ Excavators, you can choose from integrated 2D guidance up to 3D grade control. The flexibility and capability of our grade-management solutions make working smarter an easy choice.
Jul 1st, 2021
Latest

Epiroc's Tom Schwind explores key trends in the construction industry that are affecting the types of demolition attachments being used, plus provides tips on how you can get maximum return on your attachment investment.
Epiroc
Jun 7th, 2021

The correct attachment allows workers to safely complete the project within the timeline.
Curt Bennink
May 11th, 2021

These are a few standout features for a safer, more efficient compaction roller
Road Widener LLC
May 11th, 2021

Expanded line is designed and tested for compatibility with Komatsu PC78 to PC490 excavators.
Komatsu America Corp.
May 5th, 2021

Customers will be able to purchase select engcon tiltrotators through John Deere construction and compact construction equipment dealers and Hitachi excavator dealers in the U.S. and Canada starting in the second half of 2021.
John Deere
Apr 16th, 2021

The training program provides access to information to help ensure dealers and contractors are able to use and service Vacuworx equipment correctly and safely.
Vacuworx
Apr 16th, 2021

Allied will undergo a rebranding during 2021, changing the company name to Sandvik Rock Processing Solutions North America and marketing all products under the Rammer brand name.
Sandvik Mining and Rock Technology
Mar 31st, 2021

Having the right equipment on hand will ensure you're laying a solid base for your project
Jessica Lombardo
Mar 30th, 2021