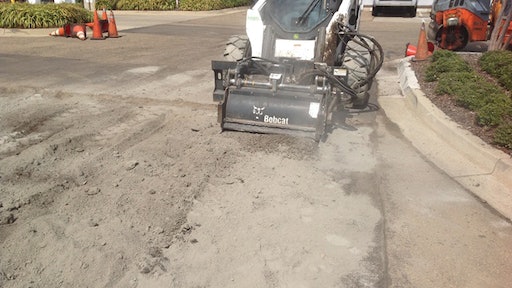 When it comes to business, you’re always looking for ways to simplify your practices and save money. That’s exactly what Gene Williams from West Tennessee Construction Services was looking for eight years ago when he started to use Bobcats for his parking lot maintenance business.

Williams started in the pavement maintenance business at the age of 19 in Arizona. Since then, he has started the business with 33 employees who maintain parking lots for large retail companies like WalMart and Lowes in the greater Tennessee area.

“We run four full crews that do maintenance as far as asphalt and concrete,” says Williams. “I have two crews that do sealcoating and crack sealing. We travel to Louisiana, Mississippi, Tennessee and parts of Kentucky, Oklahoma and Arkansas.”

As his business grew, Williams was noticing he was having a difficult time keeping up with demand. “We had a lot of problems finding qualified backhoe operators that could produce what was needed in a day,” Williams adds. He had a need to find equipment that wouldn’t hinder production.

So eight years ago, Williams invested in seven Bobcat machines for his company.

“Using a Bobcat, I can train all my crew members to run this piece of equipment in a very short time,” says Williams. “I use six man crews. If my operator gets sick, another member can take his place and not slow our project down.”

Williams purchased several attachments to accompany his Bobcat line and can now complete many different jobs with just the one machine. He purchased the breaker attachment, a power broom and a 4’ milling head to accompany a Bobcat for each different crew.

“Anybody who is doing asphalt milling, which is where everything is basically going to today, should look at these machines,” says Williams. “People don’t tear asphalt out with backhoes the way they used to because it’s hard to get rid of the left overs. With millings, basically all asphalt plants will take it, and a lot of times they’ll buy it from you. Where before, if it’s not milled up, you’re not going to get paid anything. I’ve noticed just since we’ve had these, our profit margins on these jobs are going up about 10-11%.”

“The 4’ milling head has given us very little trouble. We still have the first one we bought six years ago and use it every day,” Williams says. Williams also says the power broom is great for cleanup and saves them a lot of time.

Since the company uses the Bobcats more than most, West Tenessee Construction enters a lease agreement with Bobcat. “We actually lease-purchase the machines for two years and then we swap them,” says Williams. “We put a lot more hours on them in a quick amount of time with what we do. A lot of contractors would basically take that machine and the hours we put on them in two years, it would take them five or six years to put it on.”

Business was going great for West Tennessee until one day last year when Williams’ Bobcat salesman in Jackson unknowingly changed their business for the better. “Our salesman here at Williams Equipment in Jackson was telling us about the 870’s in horsepower,” says Williams. “It had and the extra foot-pounds of pressure that it was putting out, so he wanted us to try one. Once we tried one, we changed all of our models.”

Williams says for milling the asphalt, the tracked 870 is the best. He had formerly used 770 Bobcat machines, and said they did the job, but left something to be desired. “The 770s would basically mill about 2 inches in depth at a time. That’s about the best that they could do. They would still jump and hesitate and stuff like that,” says Williams. “With these 870s, we’ve milled up to 4 inches deep at one time in asphalt, and it just moved.”

Williams says the purchase price of the 870 is about 6% extra in cost. “But we’ve increased our profit margins by 10-11%, so it’s going to pay for itself with no problem at all,” Williams adds. “We run a profit report on every project we do, even small jobs. Just as we’ve done these, we noticed a big difference in the profit margins.”

The Bobcats have also helped the company be more mobile. With these machines, they can accept jobs in a wider area and not have to transport as many pieces of equipment. More jobs, means more money for the company.

“All we do is travel – we’re going from one store to the next,” says Williams. “On a three-day job that we used to have in asphalt, now we can do the same amount of work in two days. That means we’re getting more work done in a year.”

The company is also saving on the milling teeth they buy. “There are 70 of these teeth on one milling head, at $3.50 a piece,” says Williams. “Because of the extra horsepower and the extra psi on the pump, we’re not tearing up as many milling teeth and having to buy as many as we used to. We’re probably saving a third of the cost on milling teeth now. That’s made a big difference.”

All in all, the investment in these Bobcat machines, along with the changes in how the company completes work has been a huge success for William and his company.

“With these Bobcats, we're actually increasing our profit margins.” says Williams. “We should make a little bit better profit this year than last. That’s one of the biggest things contributing to having a fairly good year this year is those larger Bobcats.”

In addition to the Bobcat machines, Williams and his crew use Leeboy 7000 Pavers and Bomag rollers to complete paving jobs. “The Bobcats are the biggest assets to our crews though,” Williams finishes. “They just save us so much time.”

Check out the week's top trending equipment-related articles from the archives of ForConstructionPros.com.
October 30, 2020
Follow Us