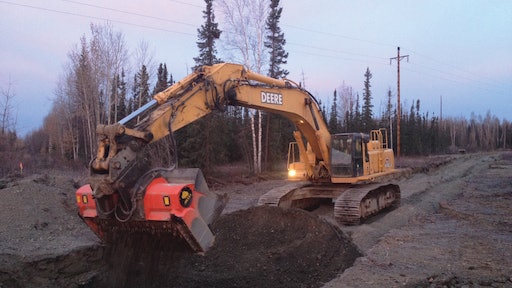 For contractors in Alaska, nothing comes easily. Beyond the harsh site and the weather conditions that continually put man and machine through the stiffest of tests, the materials themselves can be hard to come by. For over 25 years, Osborne Construction Company has specialized in complex and challenging projects, often in remote locations; that is, projects that require extensive preplanning and the ability to coordinate and manage difficult logistical issues. Finding a piece of equipment that makes the company’s job easier and one that can be used on each of their jobs helps that coordination and logistical planning go much more smoothly.

After using the ALLU D-Series DH-4-27-60 Screener Crusher attachment for a job in 2010, Osborne went to CONEXPO-CON/AGG 2011 and purchased one from ALLU Group, Inc. to attach to their 60-metric-ton John Deere 600C LC excavator. “To date we’ve already used the ALLU attachment on three job sites and are getting ready to use it on a landfill job coming up,” comments Don May, civil manager for Osborne Construction Company. “At each job site it has helped us overcome challenges quickly to get the job done on schedule. We were direct-loading 40 ton artic trucks on one of the jobs and were getting 300 to 360 ton per hour of screened material. Having as small of a footprint as possible is important to us, and this piece of equipment has allowed us to save extra production equipment and man-hours.”

Contracted to build 303 units of military housing in Joint Base Elmendorf-Richardson (JBER), Alaska, Osborne quickly discovered that the on-site material they were using under the concrete slab contained cobbles (called “big bones”), which are rocks that are generally 2.5 to 15 inches in diameter, in the raw material. Osborne built the previous housing Phase 2 near the site in 2004-2006.  “On the Phase 2 we ran into poor concrete yield, 15-20% off from theoretical yield projections because the cobbles were causing the edges of the areas excavated for the thickened edge slab of the slab to collapse. For the phase 3 we considered using more concrete but it was much cheaper to screen the 3 top three feet of under slab material,” comments May. They started off screening 140,000 yards of minus 2.5-inch with an ALLU screener crusher attachment rejecting cobbles ranging from 2.5-inch all the way up to 15-inch.

To keep material in spec and a good foundation quality, Osborne brought in the ALLU screener crusher attachment to screen the cobble material for the slabs. “Once we screened the bones, the yields came back to within a couple of percent of what the theoretical yield projected. We had great success not having the bigger rock there.”

While building a railroad extension in September of 2012, the Osborne crew was using a ripper bucket on the John Deere 600C LC loosening to a depth of six feet for a length of about 3,000 ft. after they ran into frozen material. “The material made spec, but it was full of frozen chunks,” says May. “Normally all the material would have been hauled off and replaced. Instead, we ran the material through the ALLU attachment, screened off the big stuff and reused the material in place. Everybody was really happy.”

Specializing in complex and challenging projects requires extensive preplanning and the ability to coordinate and manage difficult logistical issues. Finding a piece of equipment that makes the company’s job easier and one that can be used on a variety of jobs makes that preplanning go much more smoothly. “The ALLU attachment fits this criteria. At each job site it has helped us overcome challenges quickly to get the job done on schedule without setting up a big operation. I have no doubt it is a piece of equipment that will be frequenting our upcoming projects,” comments May.