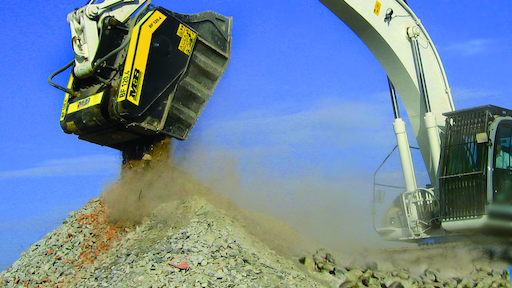 After great success at the 2014 CONEXPO-CONAGG, MB America in Reno, NV, gave away not one but two of its state-of-the-art, patented crusher buckets to two lucky winners, Monte West from Algerine West Construction in Jamestown, CA, and Bill Keaveney, from A.R. Belli in Newtown, MA.

Thanks to an impressive demonstration of its unique crusher bucket, MB America had more than 900 company leaders participate in the giveaway during the four-day event in Las Vegas. The giveaway comes as MB America works to aggressively expand throughout the U.S.The company’s equipment includes a series of crusher buckets and screening buckets, all of which are certified and constantly expanded to cover any possible application.

“CONEXPO-CONAGG provided an incredible opportunity to showcase our unique product to a large group of industry leaders,” said Miriano Ravazzolo, CEO of MB America. “We had much success in attracting people to our display with a unique demonstration and, inspired by the great turnout, were encouraged to give two of our crusher buckets away rather than just one as initially planned.”

How to apply for the Paycheck Protection Program’s forgivable loans, now modified with longer period to spend and lower percentage that must be dedicated to payroll
Larry Stewart
July 6, 2020
Latest

The Allu Processor is a power mixer attachment which converts any excavator into a powerful and versatile mixing tool capable of penetrating and effectively mixing a variety of difficult materials
ALLU Group
March 12, 2020

Strategic refocus is based on customer needs to ensure the company remains as easy as possible to do business with
Kinshofer USA
March 10, 2020

The CB 5500 and CB 7500 are designed for carriers in the 50 to 85 tons weight class and their comparatively light weights make them effective choices for use with high reach or long front carriers.
Epiroc
March 10, 2020
Follow Us