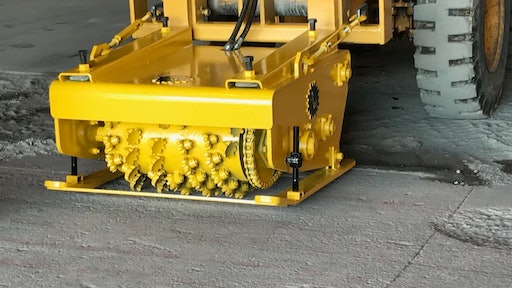 Philippi-Hagenbuch introduces the Rolling Wedge Concrete Planer as an innovative solution for pavement planing and profiling applications. Rather than rely on impact force, which has been the traditional method through cold planers, the Rolling Wedge puts concrete in tension to remove it. This reduces energy consumption by as much as 80 percent, which saves on fuel costs. It also leaves a more stable finished base.

The Rolling Wedge Cutter Concrete Planer attachment makes it easy for any general contractor to add road planing to their portfolio rather than subcontract out that work. It also can lessen expenses and increase speeds of pothole repairs and related work for highway departments and municipalities since the attachment costs considerably less than planing machines and is exceptionally maneuverable when placed on a forklift or loader.

Rolling Wedge Cutters revolve around a drum and use a wedging action to place concrete and asphalt in tension, its weakest dimension. When put in tension, material such as concrete has just 20 percent of the tensile strength of its compressive strength. That allows the Rolling Wedge to use considerably less energy than traditional planers to break through the material. Rolling Wedge manufactures the cutters of hardened steel with carbide tips, which results in minimal wear and long-lasting productivity with little maintenance.

Beyond the energy savings, the Rolling Wedge cutting drums produce a better, more stable base than what’s achieved with conventional, percussive planing forces. The traditional method leaves numerous finite cracks in the finished surface, which degrades stability. The Rolling Wedge, however, leaves the integrity of the surface undamaged as it produces coarser, 3/4-inch material cuttings that are suitable to be reused for road base material rather than discarded.

The Rolling Wedge Concrete Planer easily cuts to 3 in. deep, and options are available for greater depths, if needed. Depth is controlled by shoes on each side of the planer’s body that can be easily adjusted independent of one another. This allows the attachment to plane at an angle as well as flat.

The standard 2.5-ft.-wide planer attachment can be mounted on loaders, rough-terrain forklifts and related equipment. PHIL also offers wider widths and will work with manufacturers to offer the Rolling Wedge Cutters for use on larger milling and planing equipment.

The Rolling Wedge Cutter Concrete Planer works with the machine’s hydraulics and requires a 40-45 gallon per minute flow at 2,500 psi.

Hilltip introduces the IceStriker 1200-4200AM Combi Spreader, which is designed for half ton trucks and larger with the ability to spread granular salt, sand and gravel, but also can be transformed into a liquid deicing sprayer.
HillTip
February 10, 2021