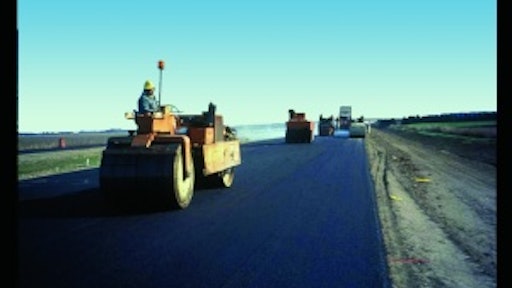 By James A. Scherocman

It is not unusual today for contractors to receive a Superpave mix design for parking lot or even driveway work if that's what the plant they are using is producing that day. A properly designed Superpave mix should result in an asphalt concrete mixture which is relatively stiff and relatively difficult to compact.

For such mixtures the compactive effort applied to the mix on the pavement must be accomplished while the temperature of the HMA material is still high. A variety of compaction equipment can be used in various combinations, including double drum vibratory rollers, pneumatic tire rollers, and static steel wheel rollers to accomplish the task.

Most specifications require a minimum level of density be obtained in the mix. That minimum level is typically set at 92% of the theoretical maximum density (TMD) of the HMA mix - a maximum air void content of 8%. For some coarse graded Superpave mixtures - those with gradations below the so-called maximum density line - some state highway departments have specified the minimum density level at 93% of the TMD value. This increase in the minimum density level is in response to problems with high water permeability in some of the coarse graded HMA mixtures.

Conventional Roller Combinations
Two primary groups of "roller trains" have been employed in recent years to compact stiff HMA mixes. The most popular combination consists of a double drum steel wheel vibratory roller operated in the initial or breakdown position. This roller is followed by a pneumatic tire roller operated in the intermediate or second position. Finish or final rolling is typically completed by a static steel wheel roller.

The double drum vibratory roller is usually kept relatively close behind the paver to obtain the initial compactive effort while the mix is still hot. In general, the breakdown rolling should be completed before the surface temperature of the mix falls below 250°F. The roller is operated at the highest possible frequency level available for the particular make and model of roller and at an amplitude setting that is dependent on the thickness of the asphalt concrete mat being placed.

For HMA layers less than 11/4 in. thick, the vibratory roller should not be operated in the vibratory mode - the roller should be run in the static mode to avoid fracturing the aggregate in the mix. For HMA layers ranging in thickness from 11/4 to 3 in., a low amplitude setting is normally used on the vibratory roller. For greater thicknesses of asphalt concrete mix, a higher amplitude setting can be used without fracturing the aggregate in the mix.

When a pneumatic tire roller is used as an intermediate roller, it is usually necessary to keep the tires at the same temperature as the mat being compacted. This means that the roller cannot be allowed to sit and wait for long periods of time, allowing the temperature of the roller tires to decrease to the point that pickup of the mix is experienced. For some polymer modified HMA mixes, it may be very difficult to prevent pickup depending on the type and concentration of polymer used in the mix.

Intermediate rolling should be completed, for a relatively stiff Superpave mix, before the surface of the mix reaches a temperature of approximately 210°F. The intermediate roller thus should be kept directly behind the breakdown roller.

A static steel wheel roller is usually used for finish rolling. The primary purpose of this compactive effort is to obtain the "last little bit" of density and to remove the marks, if any, left by the first and second rollers. For stiff Superpave designed mixes, finish rolling should be accomplished before the surface temperature falls below about 175°F.

Two Different Alternative Roller Combinations
For Superpave mixtures that contain high levels of polymer and are very stiff even at relatively high laydown temperatures (above 320°F), one alternative combination of rollers that has often been used to obtain the required level of density consists of a pneumatic tire roller in the breakdown or initial position behind the paver. In this case, the pneumatic tire compactor is kept as close to the paver as reasonably possible. As in the case discussed above where the pneumatic tire roller is used in the intermediate position, the tires of the roller must be kept hot - the same temperature as the mix being compacted.

Before starting compaction at the beginning of the day, it is necessary to run the pneumatic tire roller back and forth on a previously placed pavement for a period of 10 to 15 minutes in order to build up heat in the tires. For most normal binder (unmodified) mixtures, the pneumatic tire roller can then be operated on the new mat directly behind the paver after mix placement starts.

The second roller should be a double drum vibratory roller, operated close behind the pneumatic tire roller. The frequency of vibration used for this roller should be as high as possible. The amplitude setting, however, should be related to the thickness of the mat being placed, the same as when this type of roller is used in the breakdown position. For this combination of rollers, it is often not necessary to use a static steel wheel finish roller.

A second alternative roller combination includes the use of two vibratory rollers, using both operated in echelon or side by side with both rollers in the breakdown position. In this case, both rollers should be kept close to the paver and both machines should be operated in the vibratory mode. For most Superpave mixtures, even those that are polymer modified, a static steel wheel roller is not needed. If marks are present, they can usually be eliminated by making a final pass over the pavement surface with the second vibratory roller operated in the static mode.

In many instances, a higher degree of density can be obtained with the two vibratory rollers being operated in echelon (essentially side by side), one on each side of the lane being placed and compacted. In this situation, there is no problem with roller marks since the two vibratory rollers can easily remove their own marks due to the high mix temperature when the compactive effort is applied.

Key Factors
The key to compacting a stiff Superpave mixture is to roll the material while it is as hot as possible. Keeping the rollers - in any combination - as close to the paver as possible is extremely important.

Properly designed, a Superpave mix is supposed to have enough internal stability to support the weight of the compaction equipment without pushing or shoving. With the correct aggregate properties, such as crushed count and gradation, the stiff mix must be rolled while the viscosity of the binder material is still low - when the temperature is high - in order to be able to reorient the aggregate particles under the applied compactive effort and to densify the mix.

It has been found that, in general, the required degree of density can be obtained in the mat with fewer roller passes over any point in the pavement surface when a pneumatic tire roller is used in the breakdown position, with a double drum vibratory roller in the second position, compared to the same two rollers used in the reverse positions - vibratory roller first and pneumatic tire roller second. Fewer roller passes means a more efficient and economical compaction operation.

James A. Scherocman, P.E., is a consulting engineer who, in addition to being a regular presenter at educational conferences such as National Pavement Expo, can often be found arbitrating project conflicts between contractors and public agencies. He can be reached at 11205 Brookbridge Drive, Cincinnati, Ohio 45249 or at jim@scherocman.com. Look for a future article on compacting tender HMA mixes.