How to Use Compaction to Obtain Quality Asphalt Pavements 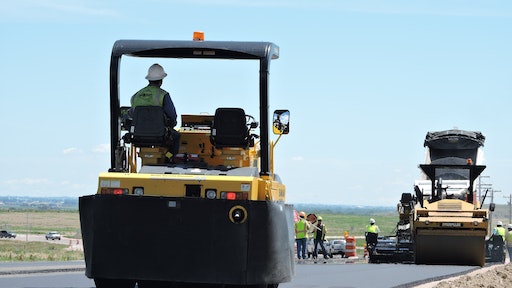 Currently, Martin Marietta owns a fleet of GW750s spread across multiple divisions, with most of them in their Rocky Mountain division.

Martin Marietta is the largest HMA mix producer and paving contractor in Colorado. Kevin Sawyer, a quality control technician for Martin Marietta has been working with asphalt for 14 years following 16 years of aggregate experience.

Nowadays, the job of a quality control technician is very broad and versatile, covering many aspects of the job, including materials, mix design and its associated reports such as Job Mix Formula (JMF), the quality process of mix production, hauling truck arrangement, laydown, compaction, communication with highway agencies and other customers, and nearly everything related to the paving quality incentive programs (bonuses and penalties).

Sawyer realizes in order to achieve highest quality of the pavement, consistency in speed of the paver is essential. He knows this because in his many years of experience in quality control, he has observed that paver operators often laydown the mix as fast as possible and end up waiting for haul tracks, hence the smoothness of the pavement greatly suffers. The speed for the paver and rollers should be consistent while keeping pace with the speed of mix delivery by haul trucks.

When it comes to mastering roller compaction, Sawyer regularly solves numerous paving, density and HMA smoothness problems, often times getting calls from other divisions’ QC engineers and managers requesting his feedback and advice to address their issues as well.

One of his “secret weapons” for these types of issues, Sawyer is a huge fan of the GW750-2, the world’s only vibratory pneumatic tire (VPT) roller which is produced by Sakai.

Besides offering a mix of vibration and pneumatic forces for compaction, thereby gaining density much faster with better uniformity, the GW750’s four levels of centrifugal force give you a huge amount of diversity for a pneumatic. A single pneumatic roller replaces your 10-ton, 14-ton, 19-ton, 23-ton, and 28-ton pneumatic rollers. And, you only have to freight the 20,580-lb. roller, saving fuel expense hauling to and from each jobsite.

Sawyer likes the GW750-2 because it makes his compaction jobs much easier since he began using the machines in 2010. Currently, Martin Marietta owns a fleet of GW750s spread across multiple divisions, with most of them in their Rocky Mountain division.

Sawyer has developed his own specific rolling patterns for various types of HMA mixes. One example is on HMA mix with polymer modified asphalt binder (5.2% AC) and NMAS of 3/4” with lift thickness of two inches that is very sticky on rubber tires and may disturb the pavement smoothness. He often uses a small double drum roller between their large breakdown rollers making 1-1/2 passes and the GW750-2 in intermediate position. Doing so removes the roller edge marks left by the 79” wide double drum breakdown roller.

This prevents the HMA mix along the roller marks getting loose, which in turn reduces pickup on the pneumatic tires. He lets the GW750 start rolling with a mat temperature of 160-170 degrees F at the beginning of the job, and gradually gets into a hotter mix zone of around 200-220 degrees F as tire temperatures increase. Sawyer also instructs his roller operators to dilute a cup of release agent in the water tank on both the front and rear spray system and to spray as required or spray on and off by using a timer.

A heat sensor attached on the front of GW750-2 is also helpful for operators to monitor the mat temperature to avoid pickup. Following this method, he has found that his crews avoid mix pickup on the tires, and using the vibratory function of the GW, can achieve density very quickly and efficiently.

Top 10 Hot Machines to Look For at CONEXPO

This new equipment has drawn the most attention on ForConstructionPros.com since January 1
April 7, 2017

NPE Adds Another Hotel for 2017 in Nashville

Contractors looking to get a jump on hotel registration for National Pavement Expo, Feb. 1-4 2017 in Nashville, TN, can reserve hotel rooms now through the Hotel/Travel link at www.nationalpavementexpo.com. Don't delay, rooms are filling fast!
June 14, 2016

The GW750-2 develops a dynamic gyratory action that combines the field-proven kneading action of a pneumatic tire roller with the high forces generated by a vibratory roller.
Sakai America, Inc.
September 14, 2015

Beginning in February Wacker Neuson will source rollers from Hamm in Germany and distribute them through its own sales network
Wacker Neuson Corporation
January 19, 2015

Coordinating the placement of five different types of mix from five mixing plants within just 36 hours was a huge logistical challenge
December 16, 2013
Asphalt