Hamm Oscillation Rollers Boost Density On and Off the Highway 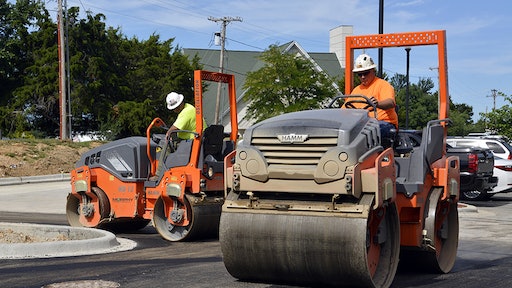 Leo Journagan Construction Company, Inc., Springfield, MO, first learned of the benefits of Oscillation technology via two Hamm HD+ 140 VO “ozzie” rollers it uses on mainline paving projects. Instead of vibrating straight up and down, the oscillatory design gives the drum a horizontal or "rocking" force that keeps the drum in contact with the mat. This attains high compaction numbers with minimal passes and no shattering of aggregate. Some contractors have even found it permits them to remove one or more rollers from a job.

”Oscillation has helped our compaction quite a bit,” says Kevin McCann, Journagan asphalt superintendent. “It brings our density points up 1% to 1.5%. The other rollers might be on the borderline, but the different way oscillation compacts brings us up another couple of points.”

Mixes spec'd by the Missouri DOT (MoDOT) tend to be Superpave designs. “Because the Superpave mixes have to cool down to a certain temperature before you can gain another point or two, oscillation can get us to density before the mix cools too much,” says McCann. “Other rollers were giving us a hard time getting there.

"Breakdown compaction will take place at close to 300° F," he continues. "We let it get to 200° F, and we then will gain another point, point and a half with oscillation.”

When Smaller is Better

On MoDOT projects, a density of 92% (minimum) to 96% is the target, notes McCann. Now commercial work is adopting MoDOT specs so density requirements are the same everywhere.

Consequently, when the new Compact Line 47-in. HD 12 VO and 54-in. HD 14 VO oscillation rollers became available in North America last year, Journagan jumped at the chance to put them to work on smaller paving projects such as commercial parking lots.

Last season, Journagan was building a parking lot for a new condo expansion in Branson, MO, including concrete curbs and gutters, placement of crusher run limestone base and paving a 3-in. asphalt lift. Some might say oscillation is fine for the big highway jobs, but overkill for smaller commercial work such as this one.

“I disagree 100%. If it’s good for one application, it’s good for all," says McCann. "With oscillation on parking lots, we’ve been able to get density quicker and easier. With regular up-and-down vibration, we would achieve a 91% or 92%, but with oscillation, we are at 93% and 94% - quicker and faster - without having to beat on it when it gets cooler, fracturing the aggregate. Oscillation in the small rollers has been a plus for us, no doubt.”

The DV23D and DV26D double drum rollers and DV23CD and DV26CD combination vibratory rollers are designed with a high curb clearance, no overhangs and a narrow drum width of 37 in.
Case Construction Equipment - CNH
January 28, 2019

Vibratory Roller Maintenance Has a Lasting Impact on Performance

IC technology proved its value for the company on a $2 million, nine-mile-long, single lift overlay job to be completed in 55 working days
Lindsay Muller
March 5, 2018

The CB13, CB15, and CB16 models can be equipped with an oscillatory vibration system for excellent application versatility, and offer refinements to the operator controls, water spray system, service access, and lighting packages.
March 8, 2018

Dynapac set to discuss the addition of oscillation to their product line, starting with CO4200, in conjunction with the release of the Generation VI asphalt rollers during an interview next week at World of Asphalt
March 1, 2018

The new CC1100/CC1200 VI is designed to meet the construction industry’s tough conditions with the operator in mind resulting in a robust, comfortable and modern machine
Dynapac North America LLC
November 28, 2017

The DV45CC Combi Vibratory Roller compacts with the front drum and delivers a smooth finish with the rear pneumatic tires.
April 11, 2017