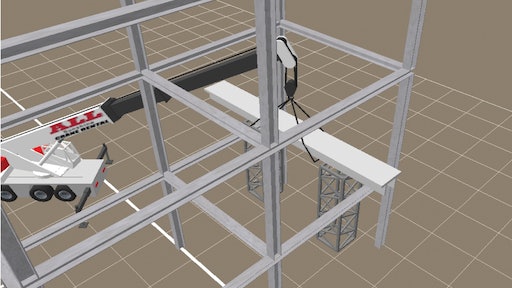 Because the walkway could not be lowered without potential damage to the concrete supports, it was rigged with custom cables for slinging.

Remove the 43-foot-long, 23,000-pound suspended walkway positioned in the center of post-tensioned concrete supports, which had to remain undamaged; plus removing and replacing numerous 45-foot, 30,000-pound precast panels from the outside of the upper section of the stadium

Originally opened in 1936, the Florida Citrus Bowl is receiving $200 million in renovations. As part of the project, a suspended walkway is being removed, and ALL Sunshine Crane Rental Corp's Liebherr LTM 1100-4.2 all-terrain crane was just the equipment for the job.

ALL Sunshine was hired by Abatement Central, a subcontractor for Independence Demolition of Independence, Ohio. ALL Sunshine and Independence worked directly together to remove the 43-foot-long, 23,000-pound suspended walkway positioned in the center of post-tensioned concrete supports, which had to remain undamaged. In addition, numerous 45-foot, 30,000-pound precast panels from the outside of the upper section of the stadium were to be lifted down and replaced.

ALL Sunshine moved in with a 100-ton Liebherr LTM 1100-4.2 all-terrain crane, chosen for its compact design and maneuverability in tight spots — which came into play on this job. To remove the walkway, the crane faced an opening only 29 by 31 feet. Due to the difficulty of the lift, Dave Hall, project coordinator at ALL Sunshine, utilized ALL’s 3D Lift Plan software to help plan the job. 3D Lift Plan calculated that the walkway could be removed with the crane’s telescoping boom operating at 74.2 feet with 37,900 pounds of counterweight, enabling the crane to handle a 15,000-pound load at only 60 percent of its capacity. The sling tension was 11,698 pounds.

Video: On the Road: Selective Demolition Helps Reconstruct a 65,000-Seat Stadium in 11 Months

Because the walkway could not be lowered without potential damage to the concrete supports, it was rigged with custom cables for slinging. Then slow, careful swinging and telescoping enabled the removal of the walkway.

For taking down the precast panels, 3D Lift Plan demonstrated that the telescopic boom needed to extend 110.9 feet, with the same 37,900-pound counterweight as for the walkway, operating at merely 61 percent of capacity.

Thanks to the precise lift plan, the right equipment and the crane operator’s skill, ALL was able to tackle a seemingly impossible job. And the Liebherr LTM 1100-4.2 was the perfect crane, with both the power and flexibility to handle both jobs, saving time and allowing the general contractor to move on to the next task.

“It was just such a tight space,” says John Carroll of Independence Demolition. “We ran through a few different scenarios, and then we came up with an idea we thought would work. The 3D Lift Plan showed us it could be done. The operator from ALL Sunshine brought that walkway out beautifully. People said we couldn’t succeed, but we did.”

The reconstructed 65,000-seat Citrus Bowl will feature a rebuilt lower bowl, a new digital video scoreboard, more specialized seating options, and a 10,000-square-foot “party deck.” The city hopes to host a future Super Bowl once the renovations are complete.

On the Road: Selective Demolition Helps Reconstruct a 65,000-Seat Stadium in 11 Months