Electrical technologies are revolutionizing earthmoving equipment, and zapping away at fuel costs. 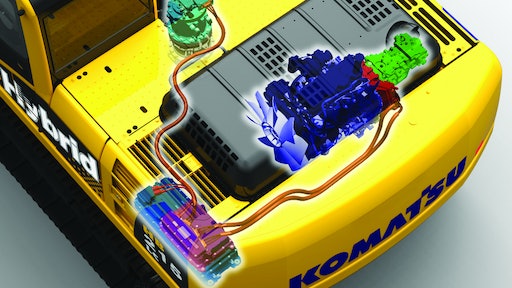 On the Komatsu HB215-1 excavator, energy in the capacitor (lower left) can be sent to either the swing motor or to the generator motor to help the engine accelerate as engine assist.

High fuel prices, competitive bidding for available work and emissions compliance place extraordinary pressures on your business. Increasing productivity and cutting costs can mean the difference between success and mere survival. Recently, several manufacturers have developed innovative equipment solutions that may just give you that competitive advantage.

New hybrid and battery technologies allow equipment to capture kinetic energy that was previously wasted as heat or, in some cases, cut or totally eliminate diesel fuel consumption. While this technology may require a higher initial investment, the payback comes in terms of increased productivity, the ability to work on regulated jobsites and reduced operating costs. Let's take a look at some of the latest innovations.

Caterpillar increased the productivity of its D7-size dozers by incorporating electric drive components that increase operational efficiency. "The D7E is not only more powerful, it is much faster than its predecessors," says Sam Meeker, track-type tractor and track-type loader applications. "There is no torque converter to absorb the power, so it is transferred directly to the track."

The secret to its performance lies with alternating current (AC) technology. "The AC power has very quick response, amazing amounts of torque and low drivetrain losses," says Meeker. "In addition to being efficient, it is also adapted very well to the dozer. The weight of the machine did not change vs. the D7R powershift tractor, but the balance is better due to the drivetrain components being spaced differently."

Efficiencies result from being able to finely tune the Caterpillar C9 engine. "The engine can be tuned to run in a narrower band, and a lower RPM band at that," notes Meeker. "Also, the efficiencies of the electric drivetrain are significant and likely contribute more to the overall efficiency than just the engine. We can basically produce only the power needed, rather than too much or too little."

Hydraulic efficiency has also been improved. "The hydraulic valves have been located closer to where they do their work - forward for the dozer and rear for the ripper or winch," says Meeker. Performance and speed have been improved, along with performance with grade control technologies. "In addition, we have eliminated many lines, hoses and leak points for better long-term durability."

Maintenance demands have decreased, as well. "Since the transmission does not have clutches, and there are fewer bearings, there is less contaminants in the oil," explains Meeker. "This allows us to have less powertrain oil and increase the interval time for both the oil and filter. The significance compared to overall O&O cost is not huge, but every little bit helps. The long-term O&O cost is much less, since the components last much longer and are effectively designed for the life of the tractor."

As you might expect, the price tag for the D7E is higher than for conventional D7R. However, the higher initial purchase price is quickly recouped. "An average customer will see payback in 2.5 years," says Meeker. "It will be even shorter as fuel prices increase."

The 644K will be the first out of the gate, with a target date of 2012. It will be sold alongside the conventional torque converter model. "This is a transmission option on the 644," says Kevin Funke, engineering manager, loaders. An electric generator and motor power the transmission and axles. "We are driving it through a traditional drivetrain system on the 644K."

The component layout leverages the conventional design. Coming off the engine is a driveshaft that runs to a gearbox, on which is mounted a generator and hydraulic pumps that run the front linkage. A cable runs from the generator to the Power Electronic Box mounted beneath the platform, with power cables extending from there to an electric motor.

"The electric motor is driving a three-speed powershift transmission," Funke notes. "Conventional driveshafts and axles run the rest of the machine. The major components on the system – the gearbox and transmission – are all mounting up in the same general location as the torque converter transmission."

In addition, a lot of energy is wasted during machine reversals with a traditional torque converter. With the hybrid system, that energy is converted to electrical energy that is then used to help raise the boom.

"So, as you are running a truck loading cycle, doing the reversals, the motor is turning into a generator," says Funke. "And while you are raising the boom to approach the truck, that electrical energy is getting converted to hydraulic energy to assist with raising the boom."

He adds, "It is a combination of minimizing the torque converter losses, plus conversion of that kinetic energy into electric energy to assist with raising the boom."

The 944K is a new size loader for John Deere with a unique hybrid approach. "We are measuring a 20% to 25% improvement in fuel efficiency compared to a torque converter system," says Funke.

In addition, independent wheel drive senses individual wheel speeds and articulation angle, and uses that information to manage tire slip on each wheel. "Because we are individually controlling each of the wheels, we are managing tire slip, which is a big improvement in tire wear," Funke relates. "That is a really big deal on that size machine."

Another advantage of independent wheel drive is the 15,000- to 20,000-hour component life. "We can rotate front motors and final drives with the rear motors and final drives," says Funke. Most wear usually occurs on the front axles of a wheel loader. "Rotating components levels out the wear and extends the overall life of the drivetrain."

Often, hybrid technology works by recycling energy that would otherwise be wasted as heat rejection. This is the case with the Komatsu Hybrid HB215LC-1 excavator. Typically, there is a lot of energy lost as you swing the excavator back and forth on the undercarriage.

"The electric swing motor recovers energy during each swing brake," says Armando Najera, excavator product manager. "This is the basis for regeneration – harnessing energy that would otherwise go unused." This energy is stored in the capacitor to be used when needed.

"The energy in the capacitor can be sent to either the swing motor or to the generator motor to help the engine accelerate as engine assist," says Najera. "This allows the hybrid to quickly respond to hydraulic power demands. This responsiveness gives the hybrid the advantage over a conventional machine."

"In a conventional machine, the engine would lug down to peak torque," he continues. "But with the hybrid system, the engine ramps up to the needed engine speed based on the hydraulic demand."

There are other benefits, such as reduced noise. "Due to the engine speed management and electrical engine assist, the engine spends less time at high rpms, making its quieter operation ideal for noise sensitive areas," says Najera. "It is impressive to be near the machine and be able to speak with a normal tone."

Unlike many hybrids that are just coming to the market, the Komatsu hybrid excavator has a proven track record. "Worldwide, there are over 700 machines in operation that have logged over a million hours of operation," Najera points out. "Some of the first machines sold now have over 13,000 hours with the original components and continue in operation."

He adds, "The hybrid system was designed with long-term durability in mind. The hybrid components utilize a separate cooling circuit. This adds to the system's long-term reliability."

Najera acknowledges there is a premium for the hybrid technology. "It varies based on local incentives," he says. "But the current pace of rising fuel prices and environmental initiatives are putting the ROI within reach of operating budgets."

Takeuchi takes the electrical concept even further with its TB 117e compact excavator, eliminating the internal combustion engine altogether. The all-electric machine, shown at CONEXPO-CON/AGG as a concept model, is powered by a lithium-ion battery.

"Li-ion technology has made great strides due in part to the automotive industry," says David Caldwell, training/product manager. "The TB117e is able to work up to six hours on a full charge. Recharging using 110 volts takes approximately 12 hours to fully charge. Recharging using 200 to 250 volts takes approximately six hours." The production model will feature plug-and-run capability should the running time need to be extended.

Since it is weather resistant, the TB117e can be used both indoors and out. "What really makes it unique is the zero exhaust emissions," says Caldwell. "This is attractive to states with increasingly tight emissions standards, and to contractors who often need a machine that can operate inside a building. The TB117e is ideal for working in schools, residential areas, hospitals, malls, food/grain production facilities, inside demolition projects, etc. Thanks to its low noise levels, it can start to work early and work late without disturbing others."

The TB117e offers the same level of performance as the conventional TB017. It features a 7-ft. maximum dig depth, 12-ft. 5.6-in. maximum reach, bucket breakout force of 4,079 lbs. and an operating weight of 3,792 lbs. Pilot controls are similar to other excavators.

"You don't really sacrifice anything," says Dave Steger, Takeuchi. "What you give up are the emissions; having to refuel it daily; and the maintenance associated with the engine. Because it is electric powered, you have a battery pack and electric motors driving a traditional hydraulic system. So a mechanic familiar with the hydraulic system would also easily be able to work on this... They are very low maintenance, very easy to maintain."

Clearly, hybrid and electric technologies are quickly becoming a reality. While the initial purchase price is typically higher, the long-term prospect for these machines to increase your bottom line is promising. This is one technology to carefully track, especially as fuel prices continue to climb.