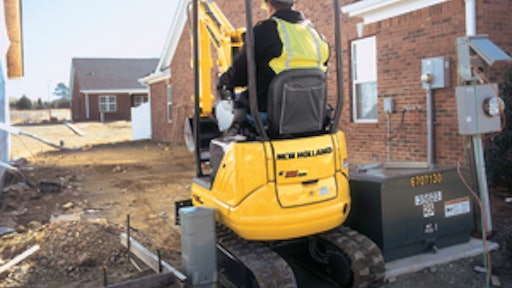 Several compact excavators in the 1- to 2-ton class range offer variable-width undercarriage systems. Although all of these systems allow access to confined jobsites, the design and benefits between brands vary. Some systems offer a wider extended track than their fixed-frame counterparts for increased stability, while others allow operation in several different track configurations for maximum accessibility.

Negotiating jobsite obstacles is a key strength. "Contractors benefit from the variable-width track feature because they routinely work in backyards, alleyways, between buildings, near trees, fences and other obstacles, and inside buildings," says Reece Norwood, product manager, Kobelco.

The ability to increase track width beyond a comparable-size fixed-frame excavator adds another dimension. "Access through smaller openings is the main purpose for the variable track system," says Bill Anderson, Volvo Construction Equipment. "The added benefit is a wider extended track width once you are through the opening."

Whether the design incorporates longer tracks or wider tracks, the net result of a variable-width undercarriage is increased stability over the front and back or over the sides of the machine.

Kobelco and New Holland both offer long track lengths of 5 ft. 1 in. on their variable-width undercarriage models. This aids over-the-blade stability. "The width of the track extended is very similar to that of other models — even those with fixed undercarriages," says Norwood.

Volvo has chosen to increase both track dimensions. "The variable undercarriage machines have a slightly longer undercarriage, which would help over-the-blade stability," says Anderson. "The variable track machines can be extended 11 in. more than the Volvo counterpart. The EC15BXTV will have better stability with the tracks expanded than the EC15BXR rigid frame machine."

Caterpillar, on the other hand, has focused on maximizing track width. "When extended, the expanding undercarriage on the 301.8C adds 14 in. to the overall width," says Mumford. "This additional width provides greater stability when digging and lifting."

Just as there are differences in track dimensions, the operation of the systems also varies.

For example, some systems offer on-the-go track width adjustments. However, it is common practice to use the blade and bucket to raise the track off the ground prior to changing track width to minimize wear.

"While it is possible to make on-the-go adjustments, we do not recommend it as it may reduce the life of the rubber tracks," says Paul Golevicz, brand marketing manager, New Holland. "Extending or retracting the undercarriage with both tracks grounded will unnecessarily stretch the tracks, contributing to premature wear."

Some designs offer added flexibility for working in confined spaces. For instance, Volvo's variable-width undercarriage can be set in three modes: both tracks extended, right extended or left extended.

New Holland, Volvo and Kobelco excavators can be operated with the tracks retracted for tight-space applications, as well. "In the contracted width, the machine is 35 in. wide, which gives it the ability to walk through a North American standard 36-in. gate, or a doorway of similar width," says Golevicz. "It also allows the excavator to work in narrow spaces as small as 36 in. wide."

Operating with the track at less than full extension will affect lifting capacity. "An operator must understand the benefits and limitations of the undercarriage in its varied configurations," says Golevicz. "For instance, the maximum lifting capacities will be obtained — especially picking over the side — when the undercarriage is fully extended."

Caterpillar doesn't advocate operating its excavator with the tracks in a retracted position. "The machine should always be operated with the undercarriage in the expanded position, unless travelling through a narrow access area such as a gate or between buildings," says Mumford.

Return on investment from variable-width systems comes quickly due to increased utilization and, in some cases, increased productivity vs. comparable fixed-frame excavators. "The ROI is only limited by the amount of additional jobs requiring a narrow carriage machine that the contractor can add to his job schedule," says Golevicz.

The added stability offered by some models can further impact ROI. "The premium for the variable-width undercarriage is less than 5%," says Mumford. "This premium is quickly overcome when you factor in the benefits of additional stability, which translate into increased digging and lifting performance."

As an example, Anderson notes, "The difference in price of the Volvo EC15 BXR rigid frame and the ECBXTV variable frame is small at about 5%, much like the industry. The EC15BXTV's price includes a two-speed drive system. Stability and access give the owner/operator the ability to take jobs in tight places and on terrain that may not be accessible with a rigid frame machine."

Downsides to variable-width systems are few. "Generally, they will weigh a bit more than their counterparts and there is always increased maintenance due to the components needed in the expandible frame," admits Anderson. "However, the benefit of having the system far outweighs the added maintenance. Any time there are more components, more maintenance may be needed. Typically, it only requires normal inspection at service intervals."

Golevicz adds, "You can't ignore the fact there are additional moving parts and hydraulic components. These should be regularly inspected and maintained. These are not difficult tasks and will not increase the total maintenance time compared to a fixed-width machine by an appreciable amount."