Profit outlook for 2013 is down 19% since the first of the year after a 43% plunge in the second quarter; dealer and company inventories dropped $2.2 billion in the quarter 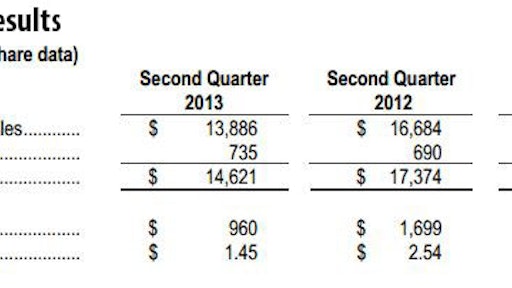 Caterpillar reduced its 2013 outlook for the second time in as many fiscal quarters after second-quarter sales dropped 16 percent, and profit plunged 43 percent. Dealer and company inventories fell $2.2 billion in the quarter. Cat now expects 2013 revenues to be $56 to $58 billion, down 11 percent from its January outlook and profit per share to be about $6.50, which is down 19 percent from the first of the year.

“Even though our sales and profit in the second quarter are down from last year, I’m pleased with how our team has performed," said Doug Oberhelman, Caterpillar chairman and CEO. "We’ve taken action to respond to the economic environment we find ourselves in, and operationally, the team has done a great job.

"We experienced headwinds during the quarter, and while we had a positive $135 million gain related to the Siwei settlement, it was more than offset by currency translation and hedging losses, an additional $1 billion of dealer machine inventory reductions and a decline of $1.2 billion in our own inventory'" Oberhelman added. "While these were significantly negative to profit in the second quarter, our outlook doesn’t reflect additional currency losses or reductions in our inventory during the second half of 2013. As a result, we expect profit to improve in the second half of the year.

“The $1 billion reduction in dealer machine inventory was more than we previously expected and was negative to our sales and profit in the quarter. While dealer machine inventory is low by historic standards, dealers are utilizing inventory from our product distribution centers and are positioned to reduce inventory even further. As a result, we expect dealer machine inventory to decline about $1.5 to $2 billion in the second half of 2013 and end the year about $3.5 billion lower than year-end 2012. That means that we are underselling end-user demand this year, and it sets us up for better sales in 2014,” Oberhelman continued.

“Operationally, we’ve done very well. We’ve taken action to aggressively lower costs, and we’ve been successful in the marketplace with end-user demand for Cat machines outpacing the industry overall. In addition, our business in China improved — our sales and end-user demand for Cat machines were up in the quarter while the overall construction equipment industry was down. Cash flow was outstanding and coupled with our strong balance sheet, puts us in a position to repurchase more Caterpillar stock this year. I am confident we are positioned to improve results in the second half of 2013.”

“Overall end-user demand is similar to our previous outlook, but we now expect a more significant reduction in dealer machine inventory. That’s the main reason for the reduction in the sales and revenues outlook," said Oberhelman. "During the second quarter, dealers increased their utilization of inventory from our product distribution centers, which allows them to meet customer demand with less inventory.

"With the sharp reduction in dealer inventory and the decline in mining, 2013 is turning out to be a tough year and we've already taken action to reduce costs," he continued. "During the first half of the year, we've had temporary factory shutdowns, rolling layoffs throughout much of the company, reductions in our flexible workforce, and we've reduced discretionary and program costs. While we've taken significant action already, we will be taking additional cost reduction measures in the second half of 2013."

In February 2007, the Board of Directors authorized the repurchase of $7.5 billion of Caterpillar stock, and in December 2011, the authorization was extended through December 2015. In April of this year, Caterpilar announced its intention to repurchase approximately $1 billion of stock, which was completed in June. Through the end of the second quarter of 2013, $4.8 billion of the $7.5 billion authorization was spent, leaving $2.7 billion in the authorization. Given the strength of its balance sheet and strong cash flow, the company expects to repurchase an additional $1 billion of stock in the third quarter of 2013.

“Repurchasing stock in a downturn is a key part of our cash deployment strategy. The $1 billion we repurchased in the second quarter of 2013, the 15 percent increase in the quarterly dividend we announced in June and the additional $1 billion of stock repurchase that we expect for the third quarter all support our commitment to deliver superior stockholder returns,” Oberhelman said.

Caterpillar worldwide full-time employment was 122,402 at the end of the second quarter, a decrease of 10,423 employees compared with Q2 2012. The flexible workforce decreased 9,633 for a total decrease in the global workforce of 20,056.

The decrease was the result of lower production and divestitures. Divestitures, including the sale of a majority interest in third party logistics business and portions of Bucyrus distribution, decreased the global workforce by 6,572.