Cyril Keller, co-inventor of the original skid steer, and other family members and dignitaries were on hand at the Gwinner, ND, production facility to mark the occasion. 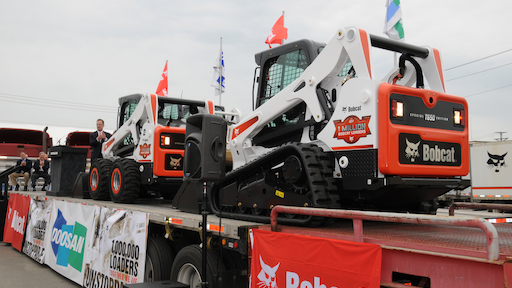 Bobcat Company marked the milestone production of 1 million loaders with a formal ceremony on July 12, sharing the occasion with its  employees and the community of Gwinner, ND, home to Bobcat’s primary production facility. The company also celebrated with family members of those who invented the original loader, perfected the design, brought it to market and created the brand five decades ago. Past organizational leaders and hundreds of others who have been part of the Bobcat success story were also present at the event.

The ceremony was held at the Gwinner factory and featured remarks from Rich Goldsbury, president of Bobcat and Doosan (parent company of Bobcat) for North America; Gwinner Mayor Dan McKeever; North Dakota Lt. Gov. Drew Wrigley; North Dakota Sen. John Hoeven and North Dakota Congressman Kevin Cramer. Sylvan Melroe, one of the organization’s first marketing managers, talked about the perseverance of the Melroe family, who owned Melroe Manufacturing, and built the first Bobcat loaders. He reflected upon the early days of the loader — as it transitioned from the original three-wheeled version to the skid-steer loader we know today — and how Melroe Manufacturing improved the design that became increasingly tested by challenging jobs the more the machine grew in popularity.

Cyril Keller, one of the brothers who invented the original three-wheeled loader and soon after partnered with Melroe Manufacturing, was on-hand as well.

The ceremony culminated with a product line roll-off of a Special Edition One-Millionth Bobcat Loader, which Bobcat is selling in limited quantities through authorized dealers.

“This entire celebration is about much more than a single loader, the actual millionth machine,” Goldsbury said. “It represents everything Bobcat has accomplished as an organization over six decades, and it signifies our vision for the future. We embrace and honor our history, so it was particularly special to have some of the company’s pioneers and early leaders here. But we wanted to bring them together with those who are moving us forward into the new era — those who will help us build the next million loaders.”

A Day Filled with Events

The general public was invited to an assortment of Bobcat-sponsored events, including a 5K run/walk in Gwinner, Bobcat factory tours, carnival-type festivities in the Gwinner Park and a “Bobcat square dance” loader performance by four brothers who have 130 years of combined service at Bobcat Company. The Association of Equipment Manufacturers (AEM) also made the Gwinner event a stop on its “I Make America” nationwide tour, which advocates for pro-manufacturing policies to create more jobs in the U.S. and keep the economy competitive with other countries. Attendees over the age of 18 could enter to win a 2014 Harley-Davidson Road King featuring a customer “I Make America” paint job.

“It was particularly special to host the ‘I Make America’ tour,” Goldsbury said. “Bobcat is a great manufacturing success story for so many reasons, from the generations that have been employed to the products they’ve produced. Thousands of Bobcat employees have given many global customers the tools they use to make a living.”

The company celebrated the production of 500,000 loaders in 2001 and 750,000 units in conjunction with its 50th anniversary in 2008. The million loaders built by Bobcat represent the largest production of this equipment by any manufacturer globally.

To commemorate the year-long celebration, Bobcat developed the “Unstoppable” campaign, which recognizes the company’s history and heritage, yet illustrates its plans to continue to set the pace in the compact equipment markets it serves.

The celebration started in January, as Bobcat Company launched a contest that ran through June, asking participants to answer the question, “How does Bobcat make you unstoppable?” The grand prize winner, who will receive a Special Edition One-Millionth Bobcat Loader, will be named in September. Bobcat unveiled its Special Edition One-Millionth Bobcat Loaders at the CONEXPO-CON/AGG trade show in Las Vegas in March.

Bobcat Company social media channels — Facebook, Twitter, LinkedIn, Google Plus, Flickr and YouTube — feature various elements of the celebration and Unstoppable content and promotions. Fans and followers can participate in merchandise giveaways and trivia contests, show pride by selecting a “pride badge,” share stories and read about how others are joining in the celebration. A special app enables customers to upload photos and apply a custom “One Million Strong” treatment. Several celebration-focused videos are available, as well.

“The ceremony in Gwinner is a great centerpiece to what we are doing to celebrate all year,” Goldsbury said. “But it doesn’t start or end with this. ‘Unstoppable’ is a theme that started in January, and we still have a lot of celebration time left in 2014 and beyond.”

Win a Custom Painted Harley-Davidson from I Make America

Takeuchi-US, a global leader in compact equipment, has announced RoadBuilders Machinery & Supply as a new dealer.
Takeuchi-US
May 2, 2020
Follow Us