Event celebrates manufacturing and acknowledges the more than 600 JCB employees who help "make America" every day. 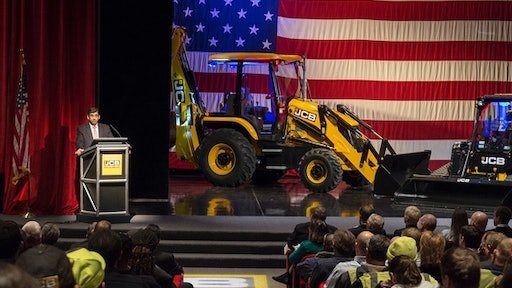 JCB North America was the proud host of the Association of Equipment Manufacturers (AEM) 2015 “I Make America” campaign kick-off. This grassroots campaign was launched five years ago in an effort to keep and sustain manufacturing jobs in America through growing support for the crucial infrastructure and farming bills that help keep our economy strong.

The event was designed as a celebration of manufacturing to acknowledge the more than 600 JCB employees who help "Make America" every day. The event began in the JCB Theatre, which was filled to capacity with additional staff viewing the presentation online. A video and onstage reveal of two JCB products manufactured in Savannah - a skid-steer loader and a backhoe-loader - in front of an American flag backdrop set the tone for the day.

John Patterson, Chairman of JCB Inc. and the 2015 AEM Chairman, opened the ceremony. “Today's event is about celebrating you, the men and women of America's manufacturing workforce and the backbone of our economy,” Patterson said before introducing Arjun Mirdha, JCB President and Chief Executive Officer.

Mirdha shared numbers with the manufacturing staff showcasing just how valuable their contributions have been to the company, the local economy and the nation as a whole. “Since 2000 when we opened the doors to our Savannah-based manufacturing facility, we've grown our workforce to support over 600 jobs. More than one thousand additional jobs are supported through JCB’s 300-plus dealer locations across North America and we’ve partnered with more than 375 suppliers and businesses throughout the state of Georgia.” He further noted that as the company celebrates manufacturing today, it also celebrates its 15th year manufacturing in Savannah and 45th year of doing business in North America.

Dennis Slater, President of AEM, then took the stage, heralding JCB for its commitment to equipment manufacturing and for their support of the I Make America Campaign.

Following Slater, U.S. Congressman Buddy Carter, spoke to JCB team members. “The role you play every day in helping to keep our economy strong is something of which you should be extremely proud,” he said. ”Not only are your efforts vital to the local economy, but also to our armed forces for whom you manufacture the HMEE, a high-mobility engineering excavator that keeps them safe while in the line of duty. Your work locally with The Lady Bamford Education Center is also exemplary. You are part of a global company that continually invests in our local community here in Georgia.”

Commissioner Center of Chatham County and Will Ball, Former Secretary of the Navy, currently Director of the Governor's Defense Initiative, were also in attendance, as well as representatives from many local organizations and associations.

Following the assembly, guests were invited on a factory tour, then to a company-wide luncheon to celebrate manufacturing. Many representatives from AEM were on hand to celebrate the occasion and build awareness of the I Make America initiative among JCB staff. More than 260 staff members signed up to support the campaign.

JCB Finance to Partner with Bank of the West for Faster, More Competitive Equipment Financing