Komatsu claims up to a 13% improvement in rough dozing efficiency with the D61i-23 over a conventional D61-23 with add-on machine control. 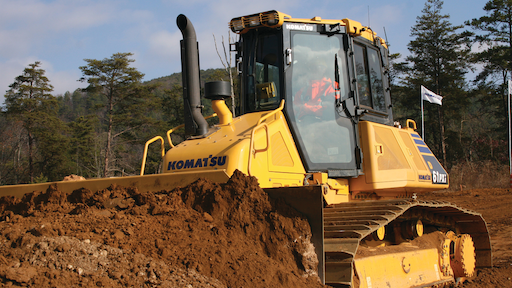 Machine grade control technology has revolutionized earthmoving operations, enabling finish grade to be achieved more quickly, and allowing even less experienced operators to be productive in a shorter period of time. It has also substantially reduced the time and costs associated with grade staking.

Peter Robson, director of intelligent Machine Controls, Komatsu America Corp., believes more and more contractors are realizing this type of technology is needed “to put profit back into jobs.” “It’s pretty obvious that machine control going forward is going to change the landscape of constructed jobsites and slopes and sides of roads as digital design files become more common,” he states. “It will be the expected way that jobs get created.”

With this in mind, Komatsu has introduced a fully integrated machine control system on the D61EXi (standard track) and D61PXi-23 (low ground pressure) dozer models. The system takes a base D61-23, introduced last year, and incorporates built-in, GPS-based machine control that fully automates the blade throughout all stages of grading.

“Not only is it fully integrated, but it also is allowing fully automatic grading operation from rough dozing to finish dozing,” says Jason Anetsberger, a Komatsu engineer. “With the conventional aftermarket machine control systems, generally, most of the time operators are choosing to run those manually [during rough dozing].”

At an operating weight range of 39,441 to 41,381 lbs., Anetsberger says the D61i-23 fits in the “sweet spot” of the finish dozer size class. “The highest install rate of machine control technology is on this size class of dozer,” he says. “We really went after the core of the market with our first intelligent Machine Control dozer.”

The system was developed in collaboration with Topcon, Komatsu’s supplier partner for machine control. “We collaborated on this project with Topcon, but a lot of the hardware that’s on the machine went through very stringent re-engineering to meet Komatsu engineering quality standards,” Robson points out.

With the D61i-23, add-on machine control system components traditionally mounted on the blade have been replaced with a factory installed, cab-top GNSS antenna that sends and receives satellite signals; an enhanced inertial measuring unit (IMU+) that calculates positional changes at up to 100 times per second; and stroke-sensing hydraulic cylinders that monitor blade lift, angle and tilt. These components, along with the machine control monitor and controllers mounted inside the cab, are installed at the factory during machine assembly.

“The design concept was to [develop] a machine that basically looks no different from one without machine control,” says Robson. “The only giveaway is the rooftop antenna... Everything else that you see [with aftermarket systems] has been removed or integrated into the base machine.” This eliminates the potential for damage to externally mounted components, as well as the daily need to install and remove GNSS antennas and cables from the blade.

As the machine travels around the jobsite, the antenna on top of the cab collects accurate surface data by measuring actual elevations. The stroke-sensing angle cylinder measures the angle of the blade for precision grading accuracy on cross-slope, regardless of blade angle.

Inside the cab, selectable dozing modes allow system response to be tailored to the machine operation. Blade load settings are also adjustable between pre-sets to match conditions. “With the ability to select a tailored mode for that operation or application, you really can optimize machine performance parameters to give you the best productivity,” says Anetsberger.

The intelligent Machine Control’s automatic blade control function can be left engaged throughout the pass because of its ability to automate lowering of the blade when the pass is started and raise it once the pass is complete.

“When the machine is dozing, [the system] realizes if there is too much load and the blade and the pressure is getting to the point where the tracks will break away and slip. It’s not going to allow that to happen,” says Robson. “It’s going to try to maintain forward movement without tearing up the ground, wearing out the undercarriage, etc.

“From the first to the last pass, it will grade in automatic and assist the operator to cut all the way down to the target design surface,” he continues, “where an aftermarket system will only cut the final few tenths out to design surface.”

Based on test comparisons, Komatsu claims up to a 13% improvement in rough dozing efficiency with the D61i-23 over a conventional D61-23 with add-on machine control.

The intelligent Machine Control on the D61i-23 will be able to integrate with Topcon’s enhanced SiteLink 3D construction management system. This integrated system will enable management of earthmoving operations through access to real-time production data via Topcon’s web service.

The system will enable users to schedule tasks and track work as it progresses, including the amount of soil dozed at jobsites. “The power of this together [will] take machine control to a whole new way of managing it,” says Peter Robson, Komatsu America. “It becomes recordable and somewhat reportable.”